Online dating went from stigmatized niche to widespread popularity in a matter of a few years. Currently, over 40 million Americans have tried online dating, and many have had a positive experience messaging, swiping, and searching for dates.

According to the Knot’s 2017 survey, online dating is now the most popular way to meet a future spouse. In fact, 19% of brides in the bi-annual survey said they’d met their significant others through online dating or social media. Meeting through friends (17%) and in college (15%) fell short of the top spot.

In the past few years, online dating has become an undeniably powerful force in the dating scene, and it’s easy to think of it as a recent phenomenon — but its incredible rise in popularity has been a long time coming. You can trace the origins of online dating to as far back as the 1600s. We’ve put together an abbreviated timeline to show how in-print flirtation evolved into online matchmaking.

While online dating has been revolutionary in a number of ways (where else can you search for a date by age, distance, religious values, and eye color?) — it didn’t spring out of nothing. You can find the roots of online dating in the classifieds section of any newspaper. Personal ads have been around since 1695, when British bachelors sought assistance in finding promising marriage prospects.

One 1865 newspaper listing looks very similar to something you’d see on a modern dating profile: “I am 18 years old, have a good set of teeth, and believe in Andy Johnson, the star-spangled banner, and the 4th of July. I want to get married,” wrote the unnamed single man.

Much like online dating, placing a personal ad involves writing facts about yourself and appealing to that special someone out there to get in touch. The newspaper used to connect communities through the spread of information, and now the internet has taken up this mantle — making the process of meeting singles faster and more convenient for everyone.

Fast-forward a couple hundred years to the 1960s, and technology is beginning to offer new, exciting avenues of exploration and advancement — and dating. Almost as soon as the earliest computers were invented, some enthusiastic young men decided to apply its operating power to the mysteries of love. 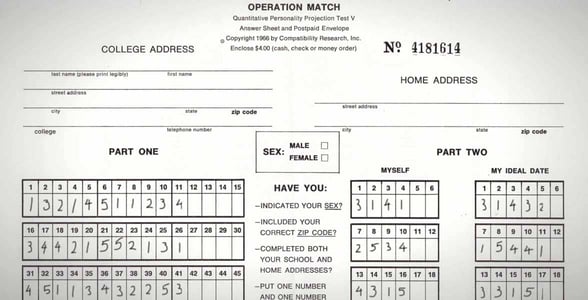 Operation Match was the first computerized matching system, and it was created by a group of Harvard students in 1965.

In 1965, a group of Harvard students started a high-tech dating service called Operation Match. They built a five-ton mainframe computer called the IBM 1401 to pair up compatible students for a modest fee of $3.

The matching system is eerily similar to modern online dating techniques. Harvard coeds would start by filling out a questionnaire describing themselves and their ideal dates, and then the computer would analyze the answers and match the co-ed with five of the most compatible participants in its databanks.

Thousands of young people tried the service out, but it’s unknown how many of them found a love using this early precursor to online dating.

3. WebPersonals.com Was Among the First Dating Sites

Andrew Conru said he was at the right place at the right time in 1994 when he founded Web Personals, which is widely recognized as one of the internet’s first dating sites. While getting his doctorate at Stanford University, Andrew launched a tech startup called Media Services to create websites and sell online services.

He said a breakup gave him the inspiration to launch a dating site because he knew it’d be difficult to find a date in his engineering program’s male-dominated classes. “The odds were bad, and I had to look elsewhere,” he said. It took about two months for him and his team to build Web Personals, which saw 120,000 sign-ups in its first 18 months.

“It was the largest web dating site until it was surpassed by Match.com in 1995,” Andrew said. He sold Web Personals to Telepersonals for $100,000, and now runs another dating site called FriendFinder.com. “I’m still single, which is the irony of all this,” he said in a 2016 interview.

The world wide web of the ‘90s is very different from the internet of today. It was a time of dial-up services and slow loading times. Of chat rooms and electronic mail. Match.com launched in 1995 as one of the first dating sites in existence — and it became one of the first major online brands. It took off before Buzzfeed, Twitter, or even Google came online. 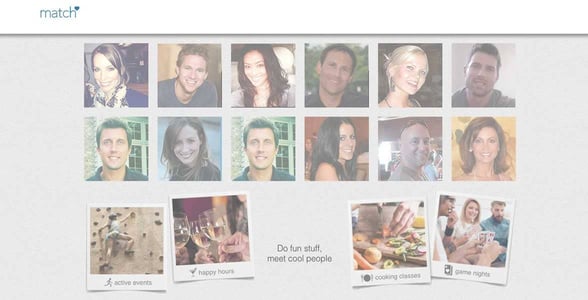 Launched in 1995, Match is now one of the most popular dating sites in the world.

At the time of Match’s launch, the internet saw 135,000+ monthly searches for online dating. Singles were clearly interested in finding ways to meet one another online, and Match.com gave them the tools they needed to make something happen.

According to an article about online romance published in The New Yorker, “Online dating sites, whatever their more mercenary motives, draw on the premise that there has got to be a better way. They approach the primeval mystery of human attraction with a systematic and almost Promethean hand.”

“You’ve Got Mail,” a 1998 rom-com, was truly ahead of its time. It was the first movie to feature online romance in a positive light. Meg Ryan plays the leading lady, an independent bookstore owner who falls for someone she met in an over-30 chat room. The only problem is he’s her bitter business rival in real life. Of course, her love interest, played by Tom Hanks, discovers her identity and is able to win her over by the time he meets her in person.

The movie revealed the potential of online relationships to help singles connect on a deeper level. According to a Bustle article, “‘You’ve Got Mail’ is more crystal ball than time capsule.” Meg Ryan’s happily ever after served as a resounding endorsement for online dating at a time when it was still stigmatized as a tool for the lonely and desperate.

“The odd thing about this form of communication is that you’re more likely to talk about nothing than something,” Meg Ryan’s character writes in a message to her anonymous crush. “But I just want to say that all this nothing has meant more to me than so many somethings.”

Today, 27% of young adults, many of whom grew up watching Meg Ryan swoon over Tom Hanks, have created online dating accounts and sought an electronic love affair of their own.

Once online dating got rolling, it really picked up speed. At the start November 2004, there were just over 600 dating and lifestyle sites in existence, and by the end of the year, online users had 844 lifestyle and dating sites at their disposal.

Online dating’s success stories have also grown exponentially with time. From 1994 to 1998, about 4% of Americans met their partners online. From 2007 to 2009, about 23% of Americans said they’d found love on a dating site. 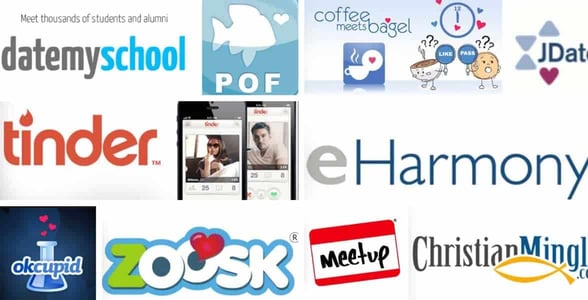 Forbes estimates there are about 8,000 dating sites, with more being created every year.

In 2013, online dating trends showed a distinct increase in mainstream popularity. According to the Pew Research Center’s survey data, about 1 in 10 Americans at the time had used a dating site or mobile dating app. What’s more, 42% of Americans said they know someone who has used a dating site, and 29% said they know someone who has met a spouse or long-term partner online.

Not only did people start using online dating more, but they also felt more optimistic about their chances of meeting someone that way. About 59% of all web users in 2013 agreed with the statement “online dating is a good way to meet people.” In 2005, only 44% of respondents agreed with that statement.

We can’t talk about online dating’s history without mentioning Tinder, one of the most successful and groundbreaking dating apps of all time (so far). When this location-based dating service launched in 2012, it distinguished itself from the current online dating scene with a swipe-based liking method that basically turned online dating into one large game of Hot or Not.

The mutual matching system originally developed by Tinder has since become standard on many dating sites and apps. Of course, Tinder, with over 1 billion swipes per day, remains firmly at the top of the pile.

“Computers are going extinct, and I thought mobile is the future,” said Tinder Co-Founder Sean Rad in a Time interview. “I wanted to build platforms through there.”

The Rest is History: How Singles Meet Will Never be the Same

If you track online dating’s progress from newspaper ads to mobile swiping, you can see how dramatically advanced technology can improve people’s lives. We’ve come a long way, and the online dating industry continues to grow year after year.

In 2013, Forbes estimated that over 8,000 online dating services operated around the world, and 1,000 new sites and apps were launched each year. It’s an exciting time to be in the dating scene — never before have singles had so many resources at their fingertips.

Wired was right on the money when it made this prediction in 2002: “Twenty years from now, the idea that someone looking for love won’t look for it online will be silly, akin to skipping the card catalog to instead wander the stacks because ‘the right books are found only by accident.’”