The Scoop: Corral de la Morería wows visitors with its culinary chops, flamenco flair, and welcoming family spirit. The Madrid tablao — or flamenco venue — was founded by the Del Ray family in 1956, and the current owner Armando Del Rey is passionate about continuing its traditions and bringing world-class flamenco dancers to the stage. Corral de la Morería is a romantic place where couples can revel in the fiery atmosphere and eye-catching entertainment on a date night they won’t soon forget.

Located in Madrid, Corral de la Morería is a restaurant that has captured the essence of the Spanish flamenco spirit for generations. Since 1956, the restaurant’s nightly flamenco shows have gained worldwide acclaim, and its influence can best be seen in the joyful faces and enthusiastic applause of the audience.

The flamenco dancers use their bodies to express emotion and connect with the crowd on a personal level. It’s hard to resist clapping and stamping along as the performers tell a story through the strength of their movement and the rhythm of the music.

Corral de la Morería offers an exceptionally stirring and romantic experience at the first and oldest tablao in the world. Armando del Rey is the owner and director of the tablao and said he’s proud to represent the tradition of flamenco.

“It’s a treat for all the senses,” Armando said. “It’s simply magical. I guess this is probably the best word to describe the experience: magic.”

Corral de la Morería is a beloved flamenco tablao that dates back to 1956.

If you’re looking for a date spot with flair, Corral de la Morería can fit the bill. Many people have raved over the tablao restaurant’s Michelin-star menu and the iconic performances. Armando says it’s not uncommon for tears to spring to the eyes of people in the audience during a show.

“This is what we want: that what you get to feel at Corral de la Morería is so overwhelming that you break into incredible emotions,” Armando said. “This is what the experience is all about, and our goal is to maintain and increase that level of emotions.”

Corral de la Morería began in 1956 when Armando’s father invented the concept of the tablao flamenco, a dining spot where flamenco music and dancers dominated the stage. Its unique lineup attracted the crème de la crème of Madrid society and became world-famous. Today, Corral de la Morería is the only tablao restaurant in the world featuring a Michelin star.

Armando’s mission is simple: to offer the best flamenco and the best Spanish cuisine under one roof. The menu offers an indulgent assortment of savory seafood, meats, and sweetbreads with almonds in a red onion sauce.

Chef David Garcia is responsible for everything that goes on in the kitchen and maintains high standards for excellence in the quality and taste of the food. David comes from the Basque Country in the northern part of Spain where culinary traditions go back generations. He has combined old and new cooking techniques to create flavorful dishes that are both familiar and exciting.

“The flavor is easily identified, but his creativity makes all the difference and brings to the guests a complete unique experience,” Armando said.

A lot of thought and effort goes into the food at Corral de la Morería.

Corral de la Morería mixes the cuisine of the north with the flamenco of the south and creates a dynamic dining experience that represents the best of Spain.

People from all over the world come together at Corral de la Morería to witness a one-of-a-kind flamenco performance. Throughout the 65-year history of the tablao, many celebrities have come through the doors as well. Armando said Corral de la Morería has seen dozens of famous guests, including Harrison Ford, Justin Bieber, Nicole Kidman, U2, Hugh Grant, Ronald Reagan, George W. Bush, and The Rolling Stones.

Couples on a date night can enjoy stellar food and a live show that has entertained people from all walks of life and from multiple generations.

“As you can imagine, our guests come from all over the world, but we also have a lot of local people from Madrid and all over Spain,” Armando said. “People absolutely love our culture and are devoted fans of our tablao. We have guests who travel from far countries just to visit us.”

Corral de la Morería has maintained high standards for its flamenco shows from the very beginning. Armando said his mother Blanca Del Ray is currently in charge of recruiting and training its flamenco performers, who are among the best in the world.

Blanca is a flamenco artist herself, and she has been the head choreographer at the tablao for decades.

“We spend a considerable amount of time and dedication to training to keep our image at its best,” Armando said. “The evolution Corral de la Morería has had over the last decade is thanks to all these differences we bring together personality-wise and culturally.”

Over the years, Corral de la Morería has earned recognition from many media outlets and has consistently been named among the best tablao flamenco spots in the world. It also has the distinction of being the first flamenco restaurant of its kind. It is also the only restaurant to have both a Michelin star and a live show. 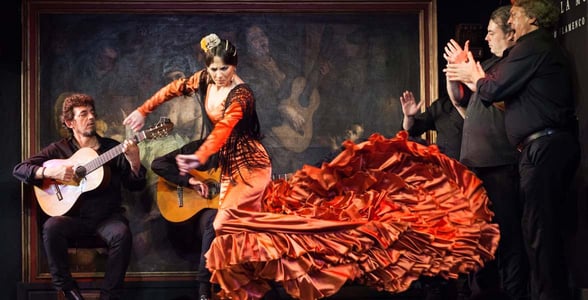 Every night, the flamenco artists take to the stage at Corral de la Morería and dance and play their way into people’s hearts. Couples on a date will be swept off their feet by the talent, musicality, and passion of the performers.

Corral de la Morería represents the history of flamenco, the vigorous rhythmic dance style of the Andalusian Gypsies and its music, which is played mostly on the guitar, accompanied by castanets. Its acclaim has reached American presidents, movie stars, and music legends.

Armando told us the story of one night in 1965 when The Beatles played their first concert in Madrid and then visited the flamenco tablao to unwind. The four musicians watched the show with delight, and John Lennon asked Armando’s father, who was the owner at the time, if it would be possible for them to jam with the flamenco guitarist and learn more about this type of music. So Corral de la Morería closed early and hosted The Beatles in the basement until sunrise.

“The history of the place makes the Corral de la Morería really unique,” Armando said. “A lot of people who come say that it is like a museum. It has some kind of aura.”

Flamenco music and dance can enthrall people with its passionate energy and evocative storytelling. Corral de la Morería performances stir up the audience’s emotion with its talented lineup of flamenco dancers and musicians. The unique shows have attracted celebrities visiting the area as well as locals celebrating a special occasion.

Armando said he and his team work hard to ensure that every person who visits Corral de la Morería enjoys a unique and unforgettable experience. The tablao restaurant represents the best parts of flamenco dance and Spanish culture, and it can be an incredibly romantic place for couples on a date night.

“Corral de la Morería is art, love, and passion. All this goes into the food we offer as well as the shows,” Armando told us. “Client satisfaction is our most precious and priceless reward.”