Online dating has come a long way in just a few decades. Match.com launched in 1995 — three years before Google — and became a pioneer in the pretty much nonexistent online dating scene. In those early days, it wasn’t clear online dating would be successful.

The idea that singles could meet one another on the internet was a revolutionary concept viewed with skepticism and sometimes derision by the general public — at first. But by 2007, online dating had become the second highest online industry for paid content. How did this dramatic shift take place? The following movers and shakers in the industry had a hand in shaping online dating as we know it today.

Dr. Neil Clark Warren has had a long and impressive career as a relationship counselor, clinical psychologist, Christian theologian, and seminary professor, but, in 2000, he added online dating entrepreneur to his résumé when he founded eharmony.

From the outset, eharmony positioned itself as an online matchmaker for marriage-minded singles. Its psychology-based 29-dimensions of compatibility formed the foundation of its matching features. To this day, eharmony relies on the questionnaire to generate match suggestions. Originally, the dating site’s questionnaire had 450 questions, but it has since been parceled down to a mere 150 questions.

Instead of having users hunt for a date for themselves, eharmony recommends compatible members in its database and only allows matched individuals to communicate online. Today, the dating site claims it is responsible for 2% of marriages in the US.

Contrary to popular belief, mobile dating has actually been around long before Tinder and iPhones. In 2003, ProxiDating became one of the first dating services to use Bluetooth to alert singles when someone with a matching profile was within 50 feet of them.

“There may well be 1.7 billion mobile phone users in the world, but it’s the number of ProxiDating users that counts, and right now there aren’t many.” — New Atlas

Mobile dating wouldn’t become mainstream until about a decade later, but some pioneering dating companies, including ProxiDating, Match, Webdate, and Lavalife, began to explore the utility of mobile phones when it comes to matchmaking.

New Atlas wrote an in-depth profile of ProxiDating in 2005 and predicted (correctly) that it would soon fizzle out. “It’s a cute idea though,” the article says, “and perhaps gives us a glimpse of the future of new forms of electronic matchmaking that will evolve as technology advances and offers new possibilities.”

The early 2000s was a exciting time for the online dating industry. Some of today’s largest and most successful dating brands launched during this time and changed the way people meet one another. Some researchers have linked the increased popularity of online dating to a rise in interracial marriages in the US.

OkCupid jumped on the online dating bandwagon in early 2004 — and its formulaic approach to love intrigued many singles looking for a budget-friendly alternative to Match and eharmony. OkCupid’s free matching tools relied (and still rely) on a questionnaire designed by four Harvard math majors. This questionnaire has thousands upon thousands of questions, but daters only have to answer a handful to receive a compatibility rating with other users.

These questions remain one of the most unique features to OkCupid and set the standard for how effective matchmaking algorithms could predict relationship success.

“We’re not shy about asking the hard questions at OkCupid,” says a 2017 blog post. “In fact, they play a big role in fueling our insanely sophisticated matching algorithm.”

A Russian entrepreneur named Andrey Andreev founded Badoo in November 2006. The dating-focused app tapped into the power of social networks to draw an audience. Badoo spearheaded the concept of “social dating” by creating a casual chatting platform where local singles can find one another. Within a year, it had over 12 million members.

“Unlike dating sites, Badoo has no algorithm,” Slate.com says. “No computer program whirs on your behalf, in search of your ideal match. You’re just thrown into the scrum, much as you would be at a club or a big party.”

Today, over 386 million people have used Badoo to chat, date, and arrange dates, and the app sees over 300,000 new sign-ups every day. According to the website, “Our mission is to provide the best technology for people to meet because happiness is better shared.”

On March 25, 2009, Grindr launched and became the first men-only dating app. The app was designed to help gay and bisexual men meet and flirt in a safe and private space. Grindr was also among the first to use geolocation to help users find date prospects in their area. Suddenly, mobile dating wasn’t just for straight people anymore. 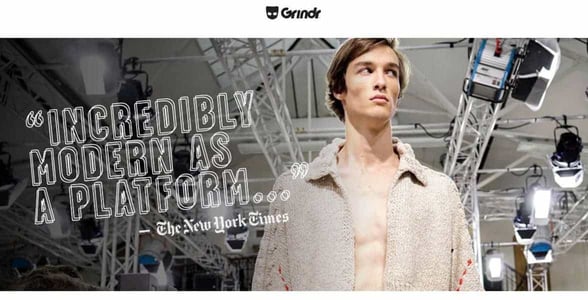 Grindr has strengthened and empowered the LGBTQ community with its popular social networking tools.

Now a household name, Grindr is currently the largest gay dating network in the world. In 2017, the dating app reported having over 27 million users in 192 countries.

Tinder needs no introduction. They invented swiping, for crying out loud! When it launched in 2012, the dating app’s one-of-a-kind mutual matching system attracted singles who wanted a quick and intuitive way to search for local dates. The innovative app met a need in the dating space — and forever changed the online dating scene.

TechCrunch named Tinder the Best New Startup of 2013 at its annual Crunchies Awards. “We hope to live up to this award,” the Founders said. “Thanks for swiping right.”

Mobile dating exploded in popularity during this time. In 2012, Match.com reported that 40% of its logins came from mobile devices, and experts estimated that over 14 million people used dating apps. By 2014, Tinder was seeing over 1 billion swipes every day.

Of course, online dating has its drawbacks, and not every headline has been favorable for the dating industry. In July 2015, AshleyMadison got on people’s radar in a bad way when the extramarital affairs website was hacked.

Ashley Madison has a vested interest in keeping its members data private, so the data breach was a disastrous development. A cybercriminal group called Impact Team targeted Ashley Madison’s large membership base and stole the personal data of over 37 million users.

Ashley Madison is an extramarital dating site with over 54 million profiles in its private database, and it is full of temptation. The site and app offer a judgment-free zone where married people can consider their options and chat with singles who are willing to get together on the down-low.

When Ashley Madison refused to give into the ransom demand, the hackers posted its user data onto the dark web. According to TheHackerNews, “The leaked data included victims’ usernames, first and last names, email addresses, passwords, credit card data information, street names, phone numbers, and transactions records, which led to blackmails and even suicides.”

Ruby Corp, Ashley Madison’s parent company, paid a $1.66 million settlement in response to charges from the Federal Trade Commission and 13 states that they did not properly protect their users’ sensitive information. The dating company also agreed to allow the FTC to oversee its network security for the next 20 years.

Finally, we’ve caught up to the present day, and, just when you think online dating has run out of surprises, Facebook decides to throw its hat into the ring. Founder and CEO Mark Zuckerberg took the stage at F8, the company’s annual developers conference, amid a flurry of bad press regarding the social networking site’s privacy policies and data breaches — and he promptly changed the subject.

Mark announced Facebook will launch a free dating feature for its single users in 2018. Facebook is all about building and maintaining relationships, he argued, so it made perfect sense for the social media and social networking site to use its tools to help singles meet.

Facebook’s announcement has already had an impact in the online dating industry.  The Match Group shares dipped 22% following the news that the biggest social networking website ever would take a swing at online dating.

“The world would lose if Facebook went away,” Mark said. “I started building a service…to put people first and at the center of our experience with technology because our relationships are what matters most to us. That’s how we find meaning and how we make sense of our place in the world.”

Facebook’s opt-in dating features could be a game changer in the online dating industry, or it could be much ado about nothing. Only time will tell.

A few decades ago, online daters didn’t have nearly as many choices as they do today. In the 1990s, Match.com was pretty much the only game in town, but now all that has changed. Modern singles have over 8,000 dating sites and apps to choose from, so they can target date prospects by location, sexual orientation, appearance, interests, or background. They can use location-based tools, mutual matching features, and high-tech compatibility ratings to find that special someone.

Once upon a time, singles who used dating sites were stigmatized as lonely or desperate, but now millions of people go online to make friends, find dates, and build long-term connections.

“Online dating is the new norm for introductions,” according to The Huffington Post. “If we are going to improve the way people meet one another, we’re going to have to do so by questioning the existing paradigms of online dating and figuring out how to do it better.”