The Scoop: Since it opened its first window in 1954, Dick’s Drive-In has become a landmark fast food burger restaurant in the Seattle area. The restaurant’s fresh ingredients and quick, friendly service has made it a popular hangout for local singles, couples, and families on a budget. Whether you’re stopping by for a quick lunch or chowing down after a night at the club, all seven of Dick’s walk-up restaurants offer a fantastic casual date spot where people can be themselves and enjoy.

One cold morning in January 1954, two war buddies and a dentist opened a walk-up burger restaurant called Dick’s Drive-In in Seattle’s Wallingford neighborhood. Dick Spady hoped to start off strong and tantalize locals with his cutting-edge burgers, fries, and shakes, but then one of the biggest blizzards on record hit Seattle and dumped 20 inches of snow on the new restaurant.

You’d think that would’ve frozen the newly opened business in its tracks; however, word still spread about Dick’s, and people came out to try it once the snow had melted. Soon, it was packed with couples, families, and friends enjoying a fast, affordable, and quality meal together. 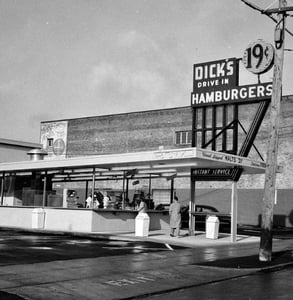 Dick had served in both World War II and the Korean War, and the 29-year-old veteran brought a sense of military discipline and tireless commitment to the restaurant business. Dick’s offers a no-nonsense menu with absolutely no substitutions or special orders allowed. This is fast food made fresh and done right, and there’s a reason the menu has barely changed since the 1950s.

Now 65 years later, Dick’s family continues to carry on Dick’s legacy and keep to the principles of good food, good service, and good community spirit that made the restaurant thrive.

Many locals, including Bill Gates, have grown up eating the same tried-and-true burgers and fries, and you’ll often see couples grabbing a bite and making cherished memories at this casual hangout. Dick’s has seven locations in Seattle, Edmonds, and Kent, and the owners have no plans to turn the successful business into a faceless franchise.

“We don’t believe in growing fast. We grow steady,” said Saul Spady, Dick’s grandson and the President of Cre8ive Empowerment, the drive-in’s marketing firm. “My grandfather believed it was important that your roots run deep instead of wide, and it’s been our greatest honor to become part of the fabric of Seattle.”

A Family-Run Business Famous for Its Fresh, Fast Food

Richard Spady got the idea to blend fast food and fresh food when he ordered a burger at a bar in Portland and saw stacks of meat patties in the kitchen freezer. He didn’t believe in skimping on quality, so he created a menu where the burgers were made fresh with 100% beef.

Because Dick’s doesn’t allow any special orders, the kitchen can move quickly and churn out hundreds of burgers in an hour. The average customer spends less than 60 seconds at the window. People order, they pay, and they get their food almost instantaneously.

“The hype is real. Open late, always decent fast food, doesn’t break the bank,” wrote Cindy N. in a Yelp review. “You can definitely taste the difference in the meat between other well-known fast food restaurants.”

Dick’s has an old-school setup where customers order at a window and eat outside.

Dick’s has a straightforward menu of plain hamburgers, cheeseburgers, and deluxe burgers with all the fixin’s. Its menu hasn’t changed much since 1954. In the ’70s, Dick’s added the Dick’s Special and Dick’s Deluxe burgers. In the ’90s, Dick’s nixed orange soda and replaced it with Diet Coke. Everything else has pretty much remained the same.

That sense of continuity has been great for people who grew up tasting the same burger and fries year after year. It’s instant nostalgia for many locals, and that brings them back to Dick’s.

“We’ve had our community’s back for 65 years, and they’ve had our backs,” Saul said.

Giving Back to Employees & Locals

Dick’s prides itself on being more than just a place to eat a burger and fries — it’s a social hub in Seattle. The Spady family cares about being community leaders and setting an example for how a responsible business is run.

“The company culture at Dick’s is really special,” Saul said. “My grandfather had three rules of business: Make a profit, take care of your employees, and give back to your community. If you do that, your business will never die.” 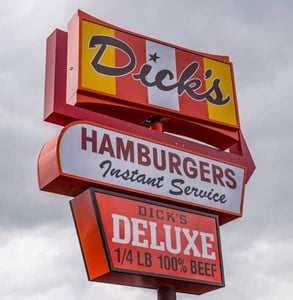 Dick’s takes care of its employees by offering access to healthcare, childcare, and scholarship opportunities.

Those simple rules have kept Dick’s running for three generations. Everyone who works at Dick’s becomes part of the family and receives a wealth of benefits, including healthcare, childcare, and scholarship opportunities. All Dick’s employees earn at least $15 per hour, and employees in more expensive parts of town receive an additional cost-of-living stipend.

Many local teenagers work at Dick’s part-time, and the restaurant relishes the chance to help them grow and achieve their dreams. The Dick’s scholarship program is one of the ways it supports its employees. Employees who work 20 hours a week for at least six months receive a $25,000 scholarship over four years. “We celebrate with our employees when they move on to college or another career,” Saul said. “It’s not seen as a negative — it’s seen as a positive.”

Dick’s is also active in the community and invests its time and resources in charitable work. As part of the Change for Charity and Roundup for Charity programs, Dick’s has raised over $2 million for charity partners, including the American Red Cross and Cocoon House.

“We still hold onto those core values from my grandfather,” Saul said. “For the future, we just plan to continue taking care of our employees and the larger community.”

A good date doesn’t have to be fancy to be enjoyable. Sometimes couples just need a place to sit and talk, and that’s why they often head to Dick’s. At this casual, walk-up eatery, you won’t have waitstaff breathing down your neck and pressuring you to cut your date off early. People are welcome to stay as long as they want and enjoy the community atmosphere. 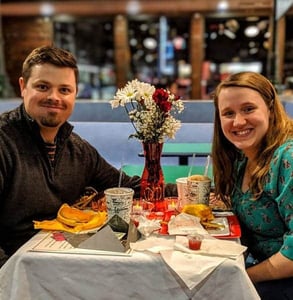 Dick’s has fostered many love stories since its opening in 1954, and it has the “Dick’s: 40 Years of Memories” book to prove it. For the eatery’s 40th anniversary, the owners asked customers to share their best memories at Dick’s, and they received hundreds of glowing testimonials, which they compiled into a book.

Jim and Sandy were hanging out with friends when they met by chance at Dick’s in 1954. The couple got married three years later. Their love story was shared by their child and featured in Dick’s book of memories.

“My favorite Dick’s memory is not my own memory but one which, if it did not happen, I would not exist,” the customer wrote. “It’s my parents’ memory I’m talking about — one I’ve listened to since I was old enough to listen. It is the story of my parents’ first meeting.”

Another meet-cute happened at Dick’s on Halloween 1987 when a young woman grabbed the arm of a stranger and said he was her boyfriend so another guy would leave her alone. Her fake boyfriend went along with the story and even got so into the role that he asked her for her number later that night. “I definitely made the right choice,” she wrote. “We were married.”

Dick’s has been the setting for countless first meetings, date nights, and even budget-friendly anniversaries over the years. Many locals describe it as the perfect late-night hangout because of its quick service, great food, and friendly vibes.

“Something magical comes out when you’re standing in line at Dick’s,” Saul told us. “It’s where everybody in the community goes to have a good time.”

Dick’s is a Well-Established Date-Night Staple in Seattle

As an outdoor restaurant in one of the rainiest cities in the world, Dick’s Drive-In has had its fair share of challenges over the last 65 years, but it has stood the test of time because of the leadership, integrity, and commitment of the Spady family. Dick’s has become popular in Seattle because of its old-school, quality-driven approach to fast food.

The Dick’s menu is straightforward, but many locals can’t get enough of the burgers, fries, and shakes. These fresh flavors remind people of a simpler time and act as a time machine for families who share fond memories at the walk-up window.

If you want to treat your date to the best of Seattle, you don’t have to bust your budget — you can get in line at Dick’s and have a great time eating $2 hamburgers at a beloved, family-run restaurant.

“We truly matter and make a difference in our community,” Saul said. “We’re where people meet and get married, and we’re where young people get their first jobs and go to college. I can’t even say what an honor it is to be this connected to Seattle and to be part of my family.”