The Scoop: The Aisle dating app has gained popularity in the Indian community by staking out a middle ground between casual swiping and matrimonial matchmaking. Serious daters can rely on its resources to find a good match and create meaningful relationships with people who share similar backgrounds and values. Since its launch in 2014, Aisle has distinguished itself as one of the most successful dating platforms for Indian marriages, and the team has plans for continued growth and improvement in the coming years.

According to Indian culture, marriage isn’t just a joining of two individuals, it’s a joining of two families. That’s why Indian parents traditionally play a major role in the marriage system and create matches on behalf of their children.

When the online dating wave reached India, it was the beginning of a season of change for young daters. The newly launched dating sites were divided into two camps: casual swiping apps for hookups and matrimonial sites that upheld old (and outdated) matchmaking traditions. 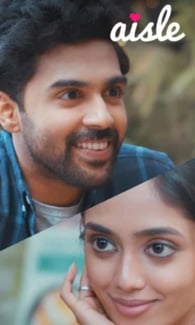 Indian singles can use the Aisle app to raise the caliber of their dates.

One way was fast and superficial, and the other way was slow and heavily influenced by families.

Aisle launched in 2014 to give modern singles a more independent and effective way to find love. This dating app caters to serious daters who want to get married — without getting their parents involved in the matchmaking.

“We saw a need for an app for high-intent dating,” the Aisle team explained. “International dating apps missed key preferences specific to Indians, like language, religion, ethnicity, and salaries.”

A musician turned entrepreneur named Able Joseph founded Aisle after experiencing for himself the challenges of navigating the Indian dating scene. He wasn’t satisfied by either casual dating apps or matrimony services, so he designed a bespoke dating solution using mobile technology.

“We’re not a one-size-fits-all dating service,” Able said in an interview. “We’ve taken a wise middle path between traditional matchmaking companies and online dating applications that are basically Tinder clones.”

Aisle has been designed exclusively for Indian singles seeking relationships. Its members have to be approved before they can start swiping and matching. User ages range from 21 to 70, but the majority are young and urban singles who have high standards for their dates and high hopes for their future relationships.

By and large, Aisle members are well-educated, affluent, and attractive people. They tend to have a strong independent streak, and that’s why they’ve turned away from the traditional Indian marriage system. 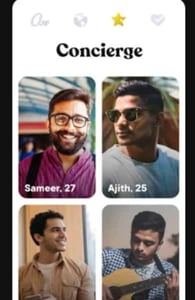 Aisle creates personalized matches based on the user’s dating preferences.

“Aisle isn’t a place for casual hookups, nor is it a place where Indian parents force their children to make a quick decision,” the app’s team explained. “Our users are looking to build a relationship. This is a mature version of dating, and we think it’s the natural fit for urban Indians to find love online.

The dating app started in major cities in India, but it has since expanded on a global scale. Its network currently reaches the Middle East, Europe, and America.

The app is free to download on Google Play and the App Store. Members can upgrade to the VIP membership program to get access to premium features, including the ability to send two Invites and one Reply per day, as well as the ability to see who has liked your dating profile.

The Aisle team consists of 17 people with diverse backgrounds and work experiences. The youngest member of the team is 19 and the oldest is 37. They are a good mix of creative and analytical thinkers. Over half of the team members have been with Aisle for more than five years.

“We are a lean team that believes in romance,” a spokesperson for Aisle said. “We come from different parts of India, follow different traditions, and have different religious beliefs. It’s truly amazing how different our personalities are and yet love to work with each other towards our common goal.”

Inspiring Love Stories Around the Globe

Aisle has taken a concierge approach to online dating. Singles aren’t simply thrown together in a local dating pool and left to fend for themselves. The app provides guidance in the form of match recommendations, conversation starters, and detailed profiles. Taken as a whole, this matchmaking system leaves little room for guesswork, and it has proven effective.

According to Aisle’s research, modern singles throughout India are looking to be the decision-makers in their romantic lives, and they have found an ally in this high-quality dating app.

“Aisle provides our users with an option to make a more informed decision,” the team said. “We are empowering women in India to take independent decisions about their love lives. We are proud to be a part of this.” 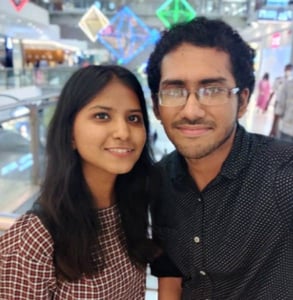 Priyanka and Paulam connected on Aisle during the COVID-19 pandemic.

Aisle boasts having matched more Indian relationships than its competitors in the market. Some touching success stories have been shared on the Aisle blog to show what’s possible with the right online dating tools.

Priyanka and Paulam met on Aisle in August 2020 and struck up an online penpalship that carried on for months during the COVID-19 pandemic. Finally, in November, the couple decided it was worth making the effort to meet one another.

“Our first meeting was awesome! I knew then that I was falling in love with him,” said Priyanka.

An Indian man named Santosh downloaded Aisle at the urging of a friend, and a woman named Krupa was his first match. The couple took their time getting to know each other on the dating app. After a month of good conversation, they arranged a coffee date. Their romantic spark became a full-blown relationship, and soon they were introducing each other to parents and family members.

Krupa and Santosh got engaged in December 2020 and are currently planning their wedding.

The Aisle team has seen tremendous growth in the user base over the last few years, and they have plans to continue to see it connect people in metropolitan and rural areas throughout the country.

“Our goal is to release the most personalized high-intent dating apps we can imagine for India’s people,” the team said. “Every story is special and inspiring. Recently, we’ve seen couples who came together during the nationwide lockdown. We’ve had plenty of those.”

The Indian matrimonial system has spent generations telling young people what’s best for them. Nowadays, young people have something more to add to the conversation. They have technology to help them make their own choices in life, and online dating tools have empowered them to take the lead when it comes to finding relationships.

Aisle was created to satisfy the needs of a new generation of singles. This dating app provides values-driven swiping to ensure that users match based on something more substantial than looks alone.

Since 2014, Aisle has sparked countless online connections that grew into real-life relationships and marriages. Its success has shown that a new era in the Indian dating world has arrived, so singles had better start working on their dating profiles and icebreaker messages.

“We want to help change the narrative of the Indian marriage system,” the Aisle team said. “We can achieve this by empowering people to make independent decisions about their marriage and love lives.”