The Scoop: Video content has become the holy grail for modern businesses seeking to catch people’s attention in the age of the internet. Every day, millions of people on Snapchat, Instagram, and other social channels share short, fun videos with one another as a way of expressing their feelings and creating a story of their lives. Now some dating sites have started using this trend to increase online engagement and user satisfaction. TransgenderDate.com, a niche site for trans singles, is at the forefront of the effort to make videos a central part of all dating profiles. Since 2007, TransgenderDate has maintained an active and safe community for 40,000+ trans singles who want to start lifelong friendships and relationships. In 2018, the dating site upgraded its overall look and launched high-tech features that allow its members to express themselves in 30-second videos and let their personalities can shine.

Online dating has a lot of pros. You can join for free. You can discover a community of like-minded people. You can meet countless new friends and date prospects without leaving home. But one of its biggest drawbacks is the fact that an online conversation isn’t enough to establish chemistry. Online daters can spend months talking to one another and still not know if they’re truly right for each other until they meet in person.

I’ve fallen into that trap a few times. Once I thought everything was flowing brilliantly. He seemed to be everything I was looking for in a date — at least, on paper. In reality, our first date went terribly because he talked so fast I could barely keep up, and, by the end of the date, I wasn’t trying. I managed to say, “It was nice to meet you,” when he paused to take a breath, and I got out of there as fast as my feet would carry me.

You don’t get a realistic sense of who a person is from just words on a page. Even the lengthiest bio can’t convey someone’s tone of voice or body language, and those two traits are extremely important when determining attraction.

This is an issue TransgenderDate.com seeks to solve by adding videos to its dating profiles. The team believes video content could be a game changer for users on the niche dating site. Now instead of wondering what a person talks like or looks like in real life, users can simply push play on a video clip and fill in the blanks left by an all-text profile.

“I think it is great, has come a long way, and will only get better as things move forward.” — A TransgenderDate user

Since its launch in 2007, TransgenderDate has spearheaded many technological advances that give online daters the information and resources they need to make sound choices on the platform. Its launch of video tools is a bold move in the industry, setting the site apart from its competition, and the team sees great potential in the feature.

“We have seen incredible growth,” said a spokesperson for the dating site. “We are seeing month-over-month user growth, and we expect the new video feature to really propel us even more.”

Users Jump on the Chance to Showcase Their Personalities

The TransgenderDate team recently redesigned the dating site to give it a more modern look and add more helpful tools. The big change getting everyone’s attention, though, is the addition of videos on thousands of dating profiles. Members can now upload a 30-second video of themselves to make their profiles really pop.

“It gives our members another way to let their personalities show,” the site’s spokesperson said. “A picture and profile questions are great, but you can get such a better feel for someone when you see them in a video.”

The TGD team believes the videos will lead to better matches and more interactions on the dating site because users will be able to better suss out who they’re compatible with. Many users have asked for this capability in the past, so the new feature is TGD’s way of giving the people what they want, which is more video content.

So far, TransgenderDate.com has gotten positive feedback from users who say they enjoy posting and viewing videos on the dating site. The team also has evidence to suggest that members who added videos to their profiles increased their visibility and attractiveness.

“We are seeing a significant increase in user interaction for those members who have added videos,” Transgender’s spokesperson said. “All the user feedback has been very positive.”

TransgenderDate is continually growing and developing new features to catch and keep people’s interest. The team is currently hard at work building a new Quick Match feature that will encourage users to quickly establish mutual interest and start a conversation with someone special.

From start to finish, the team intends to streamline the online dating process so users go from browsing to liking to chatting within a few minutes on the site.

“We have found the easier we make it for our members to reach out to someone, the more likely they will do it,” said TransgenderDate’s spokesperson.

TransgenderDate’s icebreaker feature further stimulates conversation by giving members a short pre-written message (emoji included) to send to online crushes. This saves users the time, energy, and stress of coming up with something witty to say on their own, so approaching someone becomes less nerve-wracking and difficult on the dating site. 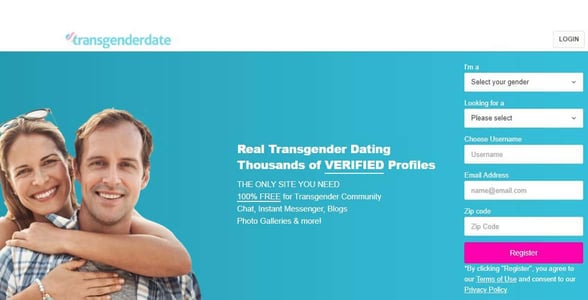 TransgenderDate welcomes single men and women of all orientations and gender identities.

All these flashy tools are wonderful selling points for the dating site, but singles are also impressed by the simple, personal touches developed by the team. One of TransgenderDate’s most popular features is the personal blog that appears on profiles. Trans singles often have specific questions and concerns when it comes to dating, and the TGD blog provides a forum for asking and answering questions about dating as an MTF or FTM.

Members can post anything they like on their personal blogs, and any member can read it and respond. Some people write about their experiences transitioning, while others ask for guidance as they struggle to find dates who accept them for who they are.

The blog gives trans singles an outlet for their frustrations, worries, joys, and hopes and it has become a popular spot to lend support to people going through tough times.

“I love you all and made a lot of very good and nice friends here,” wrote Teriwild, who wrote a blog post to announce she was getting married and leaving the site. “With I could give you ladies a big Texas hug for helping out there the years on here.”

Over the last decade, TransgenderDate.com has established a solid reputation as a legitimate and helpful niche community. The dating site currently has over 400,000 verified members, and it is growing at a rapid pace. By offering the latest technology and experimental matching features, the team expects to attract singles who are tired of the same old swiping and texting game.

Now trans, androgynous, intersex, and cis members can post videos that highlight everything they have to offer but can’t quite put into words. They can be themselves in a more realistic and engaging way, and that’s exciting for anyone hoping to make a connection.

Videos can help singles more quickly establish a connection with someone whose style and substance perfectly complements theirs. Whether seeking friendships, romance, or marriage, TransgenderDate users can put their best foot forward in the span of a 30-second video.

“TransgenderDate was created to be a safe place for trans people to find love and talk with others about any questions or issues they had. TGD is more than just a dating site — it’s a community,” the spokesperson said. “As long our members are getting something positive from our site, we are happy.”