The Scoop: Singles who are passionate about playing video games often want to find partners who share that interest, and LFGdating.com is where they can connect. In 2018, the dating platform saw record growth in member signups and message exchanges, and the team plans to launch a much anticipated mobile app in early 2019 to help even more single gamers come together.

Many gamers have found themselves in relationships with people who aren’t on the same page in terms of interests. They’ve heard partners ask questions like “When are you going to stop watching that screen and talk to me?” But what those partners often don’t understand is that gaming isn’t a way for their boyfriend or girlfriend to avoid them — it’s a passion, said Casey Tebo, the Co-Founder of the gamer dating site LFGdating.com.

“We’re trying to kill two stigmas at once: gaming and online dating,” Casey said. “It’s fun to be in the industry.” 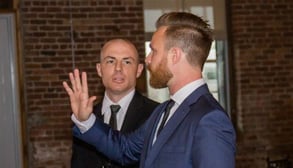 The site began when Casey and his friend Patrick Rafferty, who lived across the globe, decided to create a dating site they wished they’d had when they were younger. They wanted to build a clean, tasteful online community of mature gamers looking for someone who understands them. Casey was a high school English teacher and Patrick was a Marine stationed in Hawaii when they began working on LFGdating.

Initially, Casey worked on the site for hours at night — in between games of “Red Dead Redemption” and “Mass Effect 2.” Now, all that hard work has paid off. In 2018, LFGdating welcomed its highest number of new members and saw the most messages sent between members.

“2018 has been an active year. The site is just growing. We’re seeing all positive metrics and setting new records, which is great for us. We’re a niche dating site, but having the blood pumping in the right direction is great,” Casey said.

In 2019, the team has even bigger plans, including launching a highly anticipated mobile app for both iOS and Android devices.

The Upgraded App Will Offer the Same User-Friendly Functionality

“Do you have an app?” has been the most common question that Casey has heard since they first launched LFGdating in 2012. At first, the site had an app, but Casey and Patrick weren’t pleased with how it worked, so they developed it further.

“We pulled the app because we didn’t like the functionality,” Casey said. “But now we have a launch date for our new app, and that’s been a huge monkey off our backs.”

The official launch date should be around Feb. 1, 2019, but Casey and Patrick want to ensure that it’s working as they had envisioned. The main goal is to make the app responsive to users. 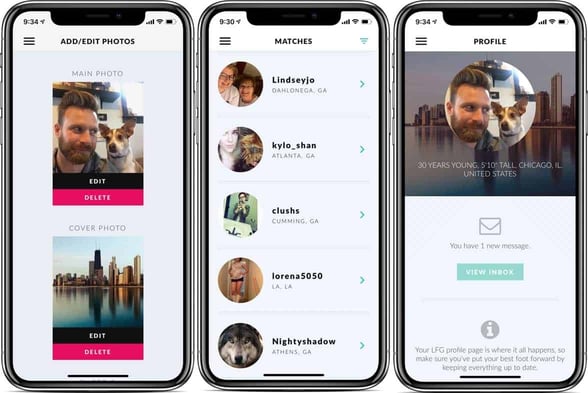 Casey told us he’s excited about the new LFGdating app, which launches in 2019.

“The big push the first half of the year will be ensuring that our app does two things well: listens to users and responds to them. Not like, ‘In 24 hours we’ll email you,’ or ‘We appreciate your thoughts,’” Casey said. “We’re focusing on fostering an experience with our members and we’ll be repeatedly checking and honing it.”

The app itself will be streamlined, just like the website, so signup should only take a couple of minutes if a user already has a profile. The app can quickly transfer a profile and that user is ready to go. New users can create a profile from the app and learn about all of its features.

“It’s very intuitive, but we will still listen to feedback once we launch so we can update it if many users say, ‘It would be cool if you had this,’” Casey said. “The idea of the app is to focus on the member and the gaming aspect of their life.”

Focusing On a Smooth Launch and Increasing Memberships

The LFGdating team has been focusing most of its time and energy on the app, so they’re looking forward to the big push. Once they’re satisfied that it’s working well, the team plans to spend the rest of 2019 on gaining new members and getting the word out about the new app.

They’ll likely go to conferences like PAX East in Boston, which they also attended in 2018.

“It was great to walk the floor, meet people, and even have some of them tell me they have used our site,” Casey said. “It’s fun to get out to conferences, it’s fun to get the app done, it’s fun to see record growth. We’re blessed to be in the position we’re in right now. We’ve had an active year, and that’s great because it means we’re moving in the right direction.” 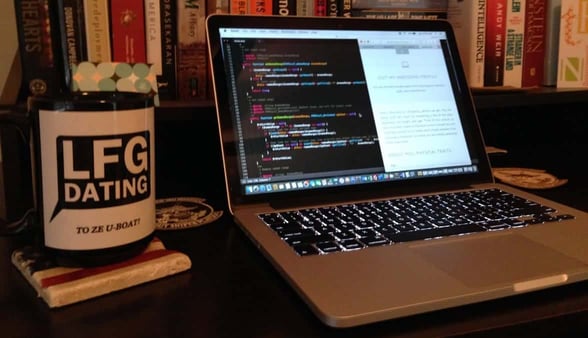 Casey and Patrick continue to work hard on bringing the platform to more single gamers.

Casey said he’s been surprised at the in-depth decision-making that goes into everything the platform does with its website and app. He knows that if they don’t get something just right, they may hear about it from a very active membership.

“It’s unbelievable how much intention goes into very small things I wouldn’t think about if I hadn’t started this. Pat and I have a quarterly meeting where we talk through bigger topics,” he said. “The experience helped me with buying a home and doing finance, too. I need to be precise.”

Working in the dating industry also gives Casey a chance to get out and socialize. The goal, he said, is to get out and connect with people.
“I love going out and talking. I think LFGdating allowed us to do that from an intensely personal — but not commercial — way,” he said.

For LFGdating, User Safety Will Remain a Top Priority

Casey and Patrick wanted to make it easier for gamers to find compatible partners. They’ve accomplished that — and then some — through LFGdating, and they take their commitment to users seriously.

With today’s privacy and data concerns, many online daters fear their information will be sold or shared in a way that could be embarrassing, bothersome, or dangerous. Casey said part of the company’s ethos is to take members’ safety seriously.

“We want people to know LFG ends at LFGdating. We don‘t sell email lists, and we’ve been this way since the beginning,” he said. “A member creating a profile and sharing their information with us doesn’t make it our information. It makes it our information to protect.”

Part of the reason that security is so important, he added, is because there’s a stigma that still seems to linger around the gaming community. People have preconceived notions about those who love to play video games to relax after work. The idea behind the site was to help people bypass the judgment that can make it hard for gamers to find love.

“There are plenty of dating sites on the internet. We understand this, and we understand that you understand this. However, LFGdating allows you to find exactly who you are looking for when you want that other person to be a gamer,” the website reads. “There is a large difference between sticking out as a gamer and standing out for your passion.”