The Scoop: In April 2017, Dr. Wendy Walsh spoke out against sexual harassment in the workplace and publicly accused Bill O’Reilly of inappropriate sexual conduct. She was the only woman to come forward with her name to the New York Times because the other women had been forced to sign non-disclosure agreements. By breaking her silence, she empowered women across the country to tell their stories and raise their voices. Now the #MeToo movement has forever changed how men and women view relationships, sex, and consent. However, some singles may feel uncertain of how to move forward in the wake of this outcry against sexual harassment and assault. Are all workplace relationships taboo? When does a casual flirtation go too far? As a noteworthy psychologist, Dr. Wendy can answer these questions and offer valuable guidance to modern daters looking to build relationships on solid moral ground.

One of my friends recently dated someone at work and felt incredibly anxious about it. She set up ground rules that mostly involved never, ever telling anyone at work that they were in a relationship. They didn’t eat lunch together. They didn’t flirt in front of coworkers. They kept their romance a deliberate secret right up until they broke up.

Now they pointedly avoid each other, and her ex has plans to switch teams so there won’t be any awkward interactions. While my friend was sad to see the relationship end, she also felt relieved that it wouldn’t have any ill effects on her career.

Dating someone you work with isn’t easy. However, the workplace is still a common place for single adults to meet and build relationships. In a ReportLinker study, 27% of single respondents identified their “working place” as a place to meet potential lovers, and 15% of respondents in a relationship said they met their current partners at work. In a CareerBuilder study, nearly 40% of employees said that they have dated someone at work at least once, and 17% have done it at least twice.

How does that work, and what does workplace flirtation look like in the wake of the #MeToo movement? We asked Dr. Wendy Walsh, a respected psychologist and author, for her advice on ethically navigating work, love, and sex with a coworker. Dr. Wendy gained notoriety as an expert on sexual harassment in 2017 after telling her story about rebuffing inappropriate advances from former Fox News host Bill O’Reilly. Now she continues to spread awareness and advocate for healthy and transparent dating practices, particularly in the workplace, in the wake of #MeToo.

“We need to have clearer boundaries about where it’s OK and where it’s not OK,” she said. “The conversations we’re having about workplaces and interpersonal relationships are good. I’m glad we’re having these conversations because we’re learning more about all the genders, and we’re progressing. This is progress. Progress is uncomfortable, but it’s all good in the long run.”

1. Date Someone on Your Level in the Workplace

Some men may worry that living in a Post-#MeToo world means never dating anyone at work again. But that simply isn’t true. The dating itself isn’t the problem. The problem is who you choose to date and how you go about it. For instance, making advances on an underling is problematic because that person is not in a position to give consent. 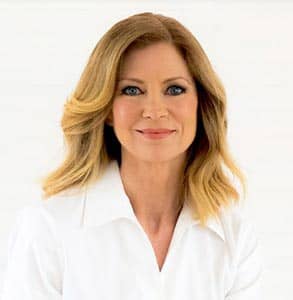 Dr. Wendy Walsh holds a PhD in clinical psychology and is an expert on gender dynamics and modern relationships.

Dr. Wendy experienced this herself when Bill O’Reilly used his power over her career to pressure her to sleep with him. This kind of tactic is reprehensible, and she urges modern daters to refrain from putting themselves or their employees in such a compromising position.

“Rule number one is if you can influence someone’s career in any way, you can’t date them,” she said.

Employees shouldn’t be afraid to form friendships and relationships with coworkers — after all, happy, social workplaces are often productive and profitable — but these bonds must be built on an equal playing field. Singles should seek relationships with people who are on the same level as they are or work in a separate department.

“I do not believe you can give sexual consent if someone controls your paycheck,” Dr. Wendy said.

Does that mean upper-level managers can never date? Not at all. It just means they can’t date at work. But there are plenty of alternative ways to meet date prospects.

Dr. Wendy brought up online dating as an increasingly viable and popular alternative to office romance. “People pine away for the good the old days when they could meet people in Starbucks,” she said, “but they are meeting people. They’re on their phones on dating apps. That’s what Tinder is for.”

2. Know the Signs of Interest & Proceed With Caution

According to Dr. Wendy, men feel an innate drive to acquire more resources and power because they believe that will make them appear more attractive to women. They want to be the boss. However, that doesn’t put them in a position to attract dates on a level playing field. It actually makes it more difficult for them to create authentic relationships with the people who work for them. 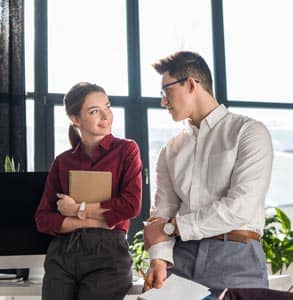 Pay attention to body language, such as leaning forward and making eye contact, to gauge a person’s interest.

Dr. Wendy told us that, from a biological perspective, men are typically the pursuers in a relationship; they seek out dates in a more active and overt way than women typically do. When they make an overture, they may not know how to read the signs and tell if a woman isn’t interested in them.

“Men are wired to overestimate a woman’s interest,” she said. “Otherwise they’d never have the guts to ask us out.”

A woman may indicate that she doesn’t want to go on a date by saying something like “We’ll see,” or “Maybe some time.” This can go right over the head of some determined dater, however, and he could continue asking her out despite her subtle rejections. That miscommunication can lead to sexual harassment accusations. Men therefore have to pay attention to social cues and not be so aggressive in their pursuit of a coworker. If the answer isn’t a clear “yes,” then it’s a “no.”

In general, coworkers need to be clear and direct when expressing interest or disinterest with one another.

Singles should also look up the company’s policy about dating a coworker. Many workplaces frown on office romances because such relationships can be problematic to the company’s daily operations. One bad breakup, for instance, can turn a productive team into a caustic environment overnight.

3. Both Partners Must Give & Receive Unambiguous Consent

Dr. Wendy’s last piece of advice for today’s singles is to talk things out with their partners. Men and women need to be open and honest with one another before entering a romantic relationship. They have to have a conversation about what they want and what they feel comfortable with. That doesn’t mean drawing up a legal contract before kissing — it can be as easy as saying yes.

“’Yes’ means ‘yes,’” Dr. Wendy said. “You have to verbally hear the word yes. You have to say yes clearly. It’s up to both people in a sexual relationship to obtain consent.”

Entering into sexual relations shouldn’t be a guessing game. Giving enthusiastic consent is not only safer, it’s also more enjoyable for both parties to know, without a shadow of a doubt, that they want this to happen.

#MeToo Ushers in a New Era of Ethical Dating

My friend lucked out that her workplace relationship came and went with very little to-do, but she had no trouble imagining all the ways it could have gone wrong for her. Her worst fear wasn’t that she’d get her heart broken — she worried that she’d ruin her reputation as a diligent, professional, and reliable employee.

Starting a romantic relationship at work can be a risky prospect. Employees may fear the consequences or complications of dating a coworker, but it doesn’t have to be an ordeal if they go about it the right way. By choosing to date someone on your level and getting clear consent, coworkers can start healthy relationships based on mutual attraction and respect.

It’s only natural to become close with the people you work with — after all, you see them practically every day — and that isn’t something that should be stifled. When coworkers enjoy spending time together, they’re often happier and more productive as well, and that can be good for a company’s bottom line.