For the Love of Money: The National Foundation for Credit Counseling Offers Financial Tips to Couples

The Scoop: Handling finances as a couple can be tricky; however, many resources can advise and support people struggling to eliminate shared debts. The National Foundation for Credit Counseling can guide couples through debt management, credit building, and other important financial decisions. In the last couple years, this nonprofit has helped over 3.1 million people budget and save properly, and its experts can offer valuable advice to those working toward a brighter, debt-free future.

Talking about money, even with someone you love, can be pretty uncomfortable. Some individuals may worry that their debt, income, or spending habits will scare potential love interests away, so they sweep such conversations under the rug.

According to a study conducted by the American Psychological Association, 36% of adults feel uncomfortable talking about money, and 72% of adults feel stressed about money at least some of the time. Financial concerns can put stress on individuals, and that, in turn, can put stress on their relationships. Sometimes money trouble can become so intense that it breaks up committed couples. 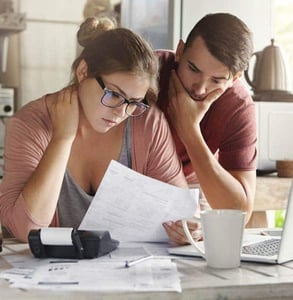 In a national survey, 21% of divorced Americans cited money as the cause of their divorce.

In a Magnify Money study, 21% of respondents cited money as the cause of their divorce. Common financial dealbreakers among married couples included overspending, credit card debt, and bad credit.

Since 1951, the National Foundation for Credit Counseling has helped people tackle and overcome such money issues. The NFCC advises individuals in one-on-one counseling sessions and makes financial education accessible to all. Today, it’s the largest and longest serving nonprofit financial counseling organization, and its staff has plenty of actionable advice to get one’s personal finances in order.

We asked the NFCC’s experts to share some tips for dating and married couples who want to merge their finances and create a bright and stable future.

“Because of people’s perception of money, they often try to avoid the topic as much as possible, especially when courting a potential partner,” said Courtney Nagle, Associate Marketing Manager at the NFCC. “Regardless of the situation, having conversations about money could lead to a more productive, healthy relationship.”

When It’s Time to Talk Dollars & Cents in a Relationship

When you’re in the getting-to-know-you phase of dating, you may naturally encounter questions about your financial stability and goals. It may be tempting to skirt such questions or oversell your financial merits, but that strategy won’t pay off in the long term. Eventually, the truth about your money habits will come out, and it’s better to let your partner know upfront what to expect.

As Courtney said, “In a discussion about money, you both should be open and honest about your current debt, spending habits, and financial obligations.”

The money talk doesn’t have to happen on the first date — or even the second or third date — but it should take place before you make a serious commitment.

Every relationship progresses at its own pace, so you’ll have to make a judgment call about when the time is right to ask money-related questions and determine if you are financially compatible.

“When you both commit to each other and start to get serious, you should begin to talk about your current finances,” Courtney advised couples. “Do not be too alarmed by what you might, or might not, hear.”

Couples should always be honest with one another about where they’re at financially. If one partner isn’t on the same page, it can lead to irresponsible spending decisions and high levels of debt.

Unfortunately, some couples don’t communicate properly when it comes to money, and that can exacerbate financial issues. A Policygenius survey reported that 38% of individuals in relationships didn’t know about their partner’s debts or assets.

“This could have a lasting effect when trying to reach goals such as homeownership,” Courtney said. “Excessive debt puts couples at a disadvantage for buying power and financial stability. So, when you both are prepared to have ‘the money talk,’ share everything.”

Clear communication is important in all aspects of a relationship, but it’s particularly crucial with regards to money. Studies have found many divorced couples regret how they handled money. In fact, 71% of divorced and separated couples said they wished they had talked about debt more, and 79% said they wished they’d discussed spending habits with their partner.

Get on the Same Page Before Creating a Joint Bank Account

Financial incompatibility can cause romantic partners to fight with one another and put a price on their relationship. Some people are naturally savers, while others are naturally spenders, and that can be a source of stress and conflict for couples. It’s O.K. to have different habits and opinions, but those differences need to be addressed so that both individuals have their needs met.

“When disagreements arise, both parties must collaborate to come up with a resolution to healthily progress their relationship,” Courtney said. “It’s also important to maintain respect and understanding for your partner’s lifestyle.”

Everyone has a different attitude about money. One person may have a can’t-take-it-with-you mentality and spend liberal amounts of money on luxuries, while his or her significant other prefers to squirrel away money to help deal with an uncertain future.

Couples should set clear expectations for how they want to manage their finances.

Couples should set expectations for spending and saving as a team, so they don’t turn their bank accounts into a battleground.

Speaking of bank accounts, many committed partners decide to create joint bank accounts so they can share responsibility and control over their financial futures. Even if you don’t plan to get married, it can be a good idea to have a joint bank account with a long-term partner so you can share living expenses.

Of course, some couples choose to keep their personal finances separate, and that’s valid too. Once you’re engaged or living with someone, you should sit down and have a serious conversation to decide which financial arrangement works best for you.

“It’s important to talk about it. We can’t say this enough. Just communication can be a relationship saver,” Courtney said. “Before combining your funds, it’s a good idea to discuss your income, debts, and money goals and make strides towards bettering your financial literacy. You both should research and make a plan that will make your financial merger less stressful.”

Set Shared Money Goals & Pay Off Debts as a Team

Many couples saying their vows obviously hope “for richer,” but sometimes a medical emergency, natural disaster, or other circumstances can set their finances back and test the strength of their relationship as two people work to get out of debt.

In some cases, the debt isn’t shared by both parties but brought into the marriage by one person. Individuals have to decide how involved they want to be in tackling a significant other’s student loans or credit card debt.

“Taking on the burden of someone else’s debt can hurt your financial health,” Courtney said, “and it’s important for you to agree on a spending plan and budget so that the debt doesn’t creep back up.”

Some couples pay off debts together, while others put the responsibility on the person who earned the debt. There’s no right or wrong here — it’s all based on what you feel comfortable with and can afford. The NFCC can help you come up with a debt management plan that works for you.

If you have the means, you may want to pay off your partner’s debts right away — even if they were incurred prior to the relationship — and start again with a clean slate. However, paying off someone else’s debt can also spare them from the consequences of their actions, which means they may not learn from their mistakes and could fall into the same trap down the line.

When it comes to a shared debt, couples have to judge what the best course of action is to get themselves on solid financial ground.

“The main piece of advice from the NFCC would be to talk about money, talk about your debt, and set goals together,” Courtney said. “If the couple chooses to confront the topic of money management, they can collaborate and work out a plan that will allow them to build a more financially stable future and create more unity in the relationship.”

It may not be very romantic, but it’s important to discuss how you’re going to handle your finances as a couple. Avoiding this conversation won’t help you solve your money issues. You have to work as a team to confront shared debts and manage your spending habits if you want to create a solid financial future together.

Money can be a touchy subject, and many people shy away from discussing their finances. However, talking about debt, credit, and other financial issues with a partner (and maybe even hiring a financial counselor) can do a world of good, removing the burden of making weighty decisions alone.

Courtney urges couples to be proactive about managing their money and discussing their financial concerns, goals, and strategies with one another.

“Finances can really make or break a relationship,” she said. “Bringing poor financial habits and debt into a relationship will only cause more strife. If you’d like to talk to someone that can help you merge finances or get you on the same page financially, our certified financial counselors can offer some unbiased advice.”