The Scoop: Forj is a Jewish dating app that uses innovative AI technology to help singles date smarter. Yossi and Shira Teichman launched the app in 2018 to offer a meaningful solution for Jewish men and women who are frustrated by today’s swipe-crazed online dating scene. Forj supports an efficient, personality-driven matchmaking system where people get to know each another on a deeper level and build relationships based on mutual compatibility.

When mobile dating exploded in popularity around 2012, millions of singles dove in without any expectations. Swiping looked fun and easy, so they gave it a shot. However, as the years have passed, many singles have grown tired of fleeting, flavor-of-the-month dating apps that sometimes promise more than they can deliver.

In the last few years, it has become clear that swiping may be great fun in the short term, but it doesn’t always satisfy online daters in the long term.

A Jewish couple launched Forj to shake up the dating scene.

As users have grown more experienced with online dating, they’ve begun demanding more from their dating apps. Today’s singles want more options, more matches, more information, and more guidance. Forj has stepped up to the plate and made a dating app designed for Jewish singles looking for something more.

A millennial Jewish couple named Yossi and Shira Teichman have both experienced setbacks and frustrations in the modern dating scene, so they felt strongly about creating a high-quality dating app where serious daters could win out.

“Technology and dignity don’t have to be mutually exclusive,” Yossi said. “At Forj, we strive to break the stigma that dating apps are impersonal, sketchy, and only for finding hookups. Although not everyone who’s on an app is dating to find a serious relationship, we know that a better option needed to exist for those who are.”

Since its launch in 2018, Forj has encouraged its users to slow down and see each profile as more than just another photo. Yossi is critical of the way dating apps objectify human beings and reduce them to a single photo and byline. He aims to provide a more rich and nuanced background on potential love interests and spark romantic connections based on deep compatibility.

“We believe the future of online dating depends on the industry’s ability to cater to the more human side of things,” Yossi said. “After all, we’re dealing with real people — not pictures. It’s time for all dating apps to honor that.”

Forj is available for free on iTunes and Google Play where it has average star ratings of 3.9 and 3.8, respectively. Forj users have called the app “groundbreaking,” “intuitive,” and “superior to Tinder,” and the team takes great pride in giving singles what they want.

Yossi described Forj’s first year as one of “trial and error.” The team relied heavily on feedback from its beta users to shape the direction of the dating app. They actively listened to what people were saying about the app, and they made tweaks to improve the user experience and create a better product. 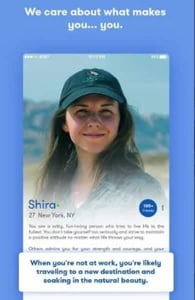 Meanwhile, the app’s advanced algorithm was also collecting data and learning about human behavior, desires, and compatibility. It analyzed every match and grew more sophisticated as more singles made connections.

Today, Forj is an effective dating app where singles can see how they’re compatible with someone and establish mutual interest before jumping into a conversation. Forj even streamlines the online dating experience by offering auto-generated profiles and icebreakers.

Forj gives singles the space to express themselves and build personal relationships, and many positive reviews have praised the app’s quality-driven approach to mobile dating.

Yossi said he is in the business to exceed expectations and serve the needs of modern Jewish singles, so he listens carefully to the feedback that comes his way.

“We’re here to break the mold and show people, including those who are hesitant to try an app, that dating apps can be a positive experience and a really good tool for serious daters,” Yossi said. “You can only tell so much from a picture. Getting to know someone’s core essence, what drives them, and what their life goals are, are much more important in the long run.”

“This app is truly incredible and absolutely game-changing!” — Shane123455, a Forj user

The Forj team is always dreaming up ways to improve and incorporate more innovative features to help singles connect with the people they’re looking for. Instead of kowtowing to swipe culture, Forj has endeavored to create a new dating culture and inspire more respectful behavior and rewarding experiences for online daters.

“We’d love to see a greater trend toward valuing singles as human beings,” Yossi said. “We need to care about people’s feelings and sensitivities in order for us to actually help them find love.”

Some apps treat dating as if it were a game, and they end up playing with people’s emotions. Singles can eventually get burned out by endlessly swiping, chatting, and ghosting online, and they start looking for an exit strategy. That’s where Forj’s AI matchmaking technology comes in.

The Forj team aims to get its users off the app and on a real-life date ASAP, and its algorithm learns from every new connection and conversation. 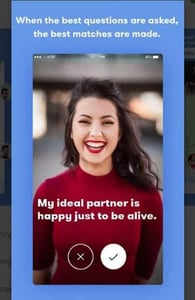 “Our goal is to set the bar higher in the online dating industry,” Yossi said. “We want to demonstrate that so many more people can find true love online — if an app gives them the right direction.”

Forj has differentiated itself from its competitors by putting quality before quantity and reaching out to a niche audience of Jewish singles. Yossi and Shira said they want to help people like them find love and happiness, and they understand the needs and desires of this demographic — because they’ve walked in their shoes.

The dating app appeals to modern singles thanks to its in-depth and intelligent matching process. According to internal data, 98% of users show interest in someone within the first five match suggestions. Forj also boasts an 85% retention rate for new members; these motivated singles continue to actively use the app after completing their dating profiles.

Forj takes the time to understand what singles are looking for, and that has made all the difference in the user experience.

“Users are craving a dignified app experience that doesn’t leave them feeling hopeless about finding love,” Yossi said. “People want to feel seen, heard, and valued for who they are, which is the opposite experience of what most dating apps offer.

Launched in 2018, Forj is a fresh face in the online dating industry, and the privately owned Jewish dating app has already established a loyal following of thousands of relationship-minded singles. Its anti-swiping message has resonated with men and women who crave real relationships and are tired of being ghosted.

Yossi and Shira are leading the way into a more values-driven online dating era where singles date with purpose. Instead of being caught in a carousel of indistinguishable matches, Forj users can see what interests, experiences, and opinions make someone unique, and that helps them start a conversation that leads to a date.

Looking to the future, Yossi said he plans to add more user-friendly features to the app and help the Forj network grow its reputation as a serious dating solution.

“Forj was created to change the whole approach to online dating,” Yossi said. “Forj gives users what they really want by infusing sensitivity, fun, and individuality into the experience.”