The Scoop: In 2015, a Muslim dating app called muzmatch (now it’s known as muzz) took the UK dating scene by storm. The Muslim singles community jumped at the chance to mingle with one another online and form long-term relationships with someone who shared their faith and values. Today, muzz has over 500,000 registered users in 190 countries. Under the leadership of Founder and CEO Shahzad Younas, the development team is racing to meet the needs of this fast-growing global audience by translating the app into as many languages as possible. So far, muzz is available in 12 languages with two more (Russian and Bengali) ready to be released by year’s end.

Islam is the religion of over 1.6 billion followers around the world making it the second-largest faith after Christianity. You may think most of these people live in the Middle East, but you’d be wrong. According to the Pew Research Center, 62% of the Muslim population (or more than 986 million people) live in the Asia-Pacific region.

The Muslim community is widespread and growing larger every day. That is a huge opportunity for Muslim dating apps like muzz, which launched in the UK in 2015 and is currently expanding its reach around the globe.

“With 400M single Muslims around the world, we have a global opportunity,” said Ryan Brodie, the Founder and CTO of muzz. “Despite this, for three whole years muzz was only available in English. In June, we embarked on going truly global.” 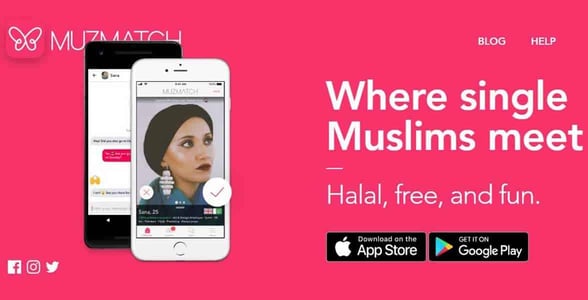 Muslim dating app muzz has sparked over 15,000 relationships in 112 countries.

Over the summer, muzz reached the milestone of 500,000 registered users in Europe, Asia, the Middle East, and North America. The app has been downloaded by people all over the world and boasts over 15,000 success stories in 112 countries.

The muzz team intends to continue that success by making the app available in as many different languages as its users speak. It’s a big goal, but the team is determined to create a dating product that reflects its users’ diversity in culture, faith, and language.

“We respect the traditions of the faith,” said Ryan, “and use cutting-edge technology to help our users find their life partners in the way they want to.”

Modifications Have Made the App Language Agnostic

Altogether, muzz has members in over 190 countries, and its global network grows bigger every day. Singles in the US, Morocco, and even Uganda have used the app to find love. A majority of muzz users reside in the UK (the Founders live there too), and muzz is about to do a marketing push to reinforce its hold on the British dating scene.

“We’re about to launch a major, six-figure advertising campaign in London, Manchester, and Birmingham,” Ryan told us. “We think it’ll be the first of its kind for any brand targeting Muslims in the UK, with a fresh, modern approach reflecting our ethos.”

The muzz community has helped the app with its translations.

While it has had great success in the UK, muzz is also ready to come into its own on the global stage. To date, muzz is available in English, Arabic, Dutch, French, German, Hindi, Indonesian, Malay, Persian, Spanish, Turkish, and Urdu. Users can expect the Russian and Bengali translations to be released shortly.

By continually adding languages, muzz has become more accessible and useful to Muslim singles across the globe. Even while muzz diversifies its languages on the frontend, the development team has streamlined its programming languages on the backend so that it is now 100% language agnostic. Because of these improvements, the team will be able to quickly and efficiently adapt its code to fit the app’s needs.

This Muslim dating app is all about responsible growth. Its trademarked Selfie Verification process ensures new sign-ups are the real deal. Team members verify the identify of new users through a selfie, SMS confirmation, and GPS-location checks. Their logic is that they’d rather have half a million authenticated members than a million fake profiles.

Another unique, values-driven feature on muzz is the ability to add a Chaperone to an account. Chaperones can monitor another user’s behavior and conversations, which is often important to more traditionalist Muslim singles and parents.

As a company, muzz makes an effort to do as much work as possible in-house. Ryan told us he doesn’t want to rely on third parties to get stuff done, so he employs product development and engineering teams that work together under the same roof.

The team has translated the app into 12 languages.

Over the last three months, the big project on their dockets was to make muzz completely language agnostic, a programming term that means coders can use any coding language to write script for the software. The muzz team had to significantly modify their internal processes to cross this goal off their list, but they got it done. Now the team can create updates in a variety of coding languages. “Having such a vertically integrated company made this possible,” Ryan said.

The muzz team is always looking for ways to make the online dating experience more efficient and productive for its users. Sometimes that means tweaking their own internal processes, and other times that means calling on members for input and support.

Recently, muzz issued a clarion call to its members — they wanted to translate the app into as many languages as possible, and they needed significant manpower to do it. Fortunately, the dating app has over half a million members, and they were more than up to the task. Many members sent in translations and offered guidance based on their experiences as dating app users and native speakers of various languages.

“The resulting translations were 20% the cost of an agency,” Ryan said, “but had far superior quality thanks to the unique understanding of our product that our users have.”

The muzz team bases its improvements and innovations on user feedback because they want to grow the app in a way that is helpful and compatible to their user base.

“The developers are doing what they can to build and add on features to help.” — Javeer Miah, a muzz user

Getting feedback from muzz users is so important that the team has created multiple avenues for everyday singles to get in touch. All users have to do is shake their smartphone while the app is open to report a bug or an issue with a member. Members can use this fast and easy feedback mechanism from anywhere in the app. The team takes time to understand the issues facing users so they can start working to fix them.

“It’s a great app that allows you to meet others for the purpose of marriage.” — Zkir Ali, a muzz user

“Users can even include a screenshot in their bug report which has proven invaluable when tackling translation issues,” Ryan said. “We built a brand new mechanism for users to report feedback as we knew it’d be crucial to the app’s success.”

The team has created a community feel by asking users to invest in the app and provide their honest opinions, criticisms, and even translations.

“We’re pleased to see this further our community’s involvement in our product,” Ryan said. “Our biggest learning from the launch was relying on the user’s phone to determine the language of the app wasn’t the right way to go.”

Since its launch in 2015, muzz has worked hard to meet the needs of Muslim singles in the UK and around the world. The dating app’s story is one of rapid growth and global success, thanks largely to the team’s willingness to listen to user feedback and adapt its processes to be more helpful and effective.

Though muzz serves a niche audience, its members live all across the globe and speak many languages, and that presents the team with both a challenge and an opportunity. In the coming months, muzz users can expect the app to add more languages, more users, and more features so that any Muslim single anywhere in the world can use the app to find a relationship and, eventually, marriage.

“We’re proud to be solving for a community that has been entirely overlooked by the industry,” Ryan said. “With unique features like photo privacy, chaperone support, and an entirely Selfie Verified community, we’re thrilled to have helped over 15,000 people find their partner.”