The Scoop: Jonathon Aslay is a dating and relationship coach, but helping people find love isn’t his primary goal. He first wants his clients — who are mostly women — to find inner peace. Jonathon encourages women to pursue their own happiness with a friendly, no-nonsense coaching style that sets him apart from other experts in the industry. He’s available whenever clients text or call because this is more than just a job to him — this is his passion.

Jonathon Aslay is a dating and relationship coach who works with women through his Understand Men NOW platform. However, his primary goal isn’t helping them find romantic relationships. More than anything, he wants them to find a happiness that can only come from within.

“Happiness is derived on its own. If you’re happy and the relationship comes, great. And if it doesn’t, that’s great, too,” he told us.

Jonathon coaches his clients to find happiness in themselves by spending an hour a day on inner peace work and growth. Otherwise, he warns, most will just keep repeating the same negative patterns — no matter how many new relationships they start.

“They’re just trading one problem for another because they’re not doing the work,” he said. “It’s about feeling so good about yourself that you become magnetically attractive.” 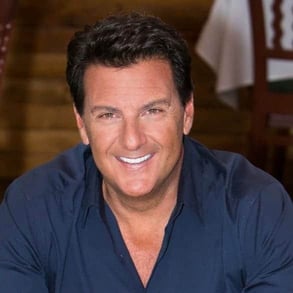 Jonathon Aslay coaches his clients to find the happiness within themselves before seeking the relationships they desire.

Ultimately, Jonathon said, if people are confident in themselves, the relationships they seek will find them.

Jonathon conveys that message through his collection of coaching programs, all designed to help women improve their self-esteem and peacefulness. These programs include Unlocking the Male Mind, Finding Love Online, and a group coaching program called Mid-Life Love Mastery.

The latter is a monthly membership program through which members can access audio and video lessons, a monthly webinar, and a daily Facebook Live stream where they can ask Jonathon questions. He also offers a one-on-one coaching program called Shortcut to Mr. Right.

“Helping women prepare for love is the first step, and holding their hands is the second step,” Jonathon said. “Often, our ego competes with our heart. I open space in their hearts to remove the block that allows the ego to get in the way.”

From an Online Dater to an Expert in the Dating Industry

Jonathon didn’t envision a life as a dating coach. Instead, he fell into the profession when he started dating online after a divorce in 2005. He found plenty of women he liked — and dated over 100 of them. But he never found a relationship.

Soon, he recognized that his issues weren’t with the women he was dating.

“I realized something wasn’t right with me. I’m talking to women every day all over the country, but I was lonely, sad, and bored,” he said.

Then Jonathon started working on himself. He spent an hour a day studying spiritual leaders and therapy — any books he could get his hands on in topics on personal empowerment and inner peace.

As Jonathon came to recognize the issues that were holding him back, he also started offering feedback on women’s dating profiles.

“I learned I had a knack for helping women create their profiles, and I thought, ‘Hey, I could do this for a living,’” he said.

Eventually, he wrote a book, set up a website, and started providing advice to a broader audience. He soon found his niche in the dating industry because it was one he understood: counseling women in mid-life — ages 42 to 69 — who were navigating the difficult waters of online dating.

This demographic of daters has unique struggles. For example, many women in this category are divorced, so they have different experiences than daters who have never been married.

“I cater to the divorced demographic, and there are a lot more moving pieces. I specialize in helping women understand some of the issues men face, including elderly parents, family court, erectile dysfunction, and so on,” said Jonathon.

Encouraging Singles to Take Ownership of Their Weaknesses

Jonathon finds that many of his clients see themselves as victims rather than victors. That mindset makes them believe that the other party is always the problem and that they’re faultless.

“Women often act like martyrs or victims in the dating process, and some will not take ownership of their own faults,” he said

Many daters also seek coaching because they want a quick fix. They think that a relationship is all about falling in love but aren’t willing to put in the work it takes to create a lasting partnership. That’s why the tactics offered by many dating coaches are doomed to fail because, while they may help women find dates, they won’t solve any underlying issues.

“A relationship, in itself, should be relatively effortless. The hard part is learning forgiveness for yourself and managing expectations,” Jonathon said.

Jonathon’s clients can access his coaching programs in a variety of formats and channels.

Of course, no definitive program teaches people how to maintain healthy relationships — or how to choose them in the first place. If Jonathon could impart one thing on young people, it would be the importance of choosing a mate.

“Chemistry does not equal relationship success,” he said. “If the chemistry is there right off the bat, a lot of couples enter a relationship without any awareness if they share values or have compatible values.”

Instead, a healthy, long-term couple should have the four pillars to relationship success: chemistry, shared values, compatible lifestyles, and emotional maturity. Jonathon’s job is to help his clients find those four pillars — both in themselves and in the men they date.

Jonathon Aslay: The “Best Friend” to Call When You’re in a Dating Crisis

Jonathon has been a full-time dating coach for more than a decade because his methods are so successful. Part of the reason for that is his approach.

“I call my style heart-centered radical honesty. It’s direct. A little tough love, and a lot of heart,” Jonathon said.

This approach has prompted some of his clients to think of him as a big brother. He helps women find men well-suited to them — while also weeding out the subpar guys.

Though he can be blunt, Jonathon’s clients cherish his honesty. They also appreciate how open he is to helping them whenever they need it. For one-on-one clients, Jonathon makes himself as available as possible. He doesn’t have set hours and is open to interacting with clients whenever they have issues. This means that he can adapt to the client’s schedule rather than punching out at a certain time.

“My clients have my personal cellphone number. I can get a text message on Sunday at 10 p.m., and I’ll get on the phone. I want every client to treat me like they would their best friend,” he said.

“Making a difference in someone’s life — and helping them find their inner peace — is what it’s all about for me.” — Jonathon Aslay, Dating and Relationship Coach

Perhaps Jonathon has such boundless energy for his clients because he doesn’t view his profession as a job.

“I treat my work as a passion, and I allow spirit and the universe to guide me every day,” he said.

The belief that he’s in the profession for the right reasons translates into his success. He always follows his own happiness, just as he counsels his clients to do.

“Making a difference in someone’s life — and helping them find their inner peace — is what it’s all about for me,” Jonathon said.