The Scoop: People often think they won’t be completely happy until they find “The One,” but Relationship Coach Clayton Olson believes that true happiness comes from within. He teaches clients how to develop healthy relationships with themselves, so they can enjoy more fulfilling relationships with everyone else in their lives. Clayton encourages authenticity, vulnerability, and honesty, and focuses on neuro-linguistics to help people change their self-perceptions and overcome obstacles in both love and life.

The types of people who seek the help of Relationship Coach Clayton Olson tend to fall into two categories. The first, he said, are people who want to learn how to heal after a breakup. Often, these clients are men, and Clayton shows them what they need to do going forward.

“In the dating world, men are not looking for relationship advice until ‘stuff’ hits the fan, unfortunately. That’s why guys find me in the middle of the divorce or a breakup, and they realize that something is happening and that a shift has occurred,” he told us. “The rubber hit the road, and it’s time for them to do something.”

The other type are people who find themselves struggling in a relationship, but don’t understand why.

Many of Clayton Olson’s coaching clients are experiencing turmoil in their relationships.

“These are often single women who keep dating guys who are bad for them, who are not capable of being in relationships right now because they’re narcissists or have psychological conditions,” Clayton said. “They’ve been in abusive relationships and need help to break that pattern.”

While each client has a unique history and set of experiences, Clayton sees many people who limit themselves and can’t forge healthy internal relationships that make up the foundation for fulfilling relationships with others.

That’s why Clayton takes an inside-out approach. He said that while many people are looking for strategies and tactics, learning how to have a healthier, more stable relationship with yourself will echo throughout all of the external connections you create.

“It’s the shift within that becomes the model for what is created outside in your intimate, professional, and personal relationships,” he told us. “That’s the shift I’d like to bring: How can we have a healthy relationship with us? How can we enjoy our own company? That leads to better partner selections, better boundaries, and better ways to create happiness instead of operating through fear and trying to find someone when we don’t feel whole and complete.”

Neuro-Linguistic Programming is the Heart of His Training

Clayton began his path to becoming a relationship coach when he was just 18 years old, not long after his father had passed away from cancer. He started investigating the idea of neuro-linguistic programming as a way to bring happiness back into his life. The general concept, he said, is that we have the power to overcome the stories we tell ourselves in a way that fundamentally changes how we live our lives.

“I was in a pretty rough spot, so I was looking for different solutions to help me get back into control of my own life. I started looking at different things I could do to help myself and fix what I thought was broken,” he told us. “It was just self-development. I had no idea that I wanted to be a coach or help people become more empowered in terms of dating and relationships.” 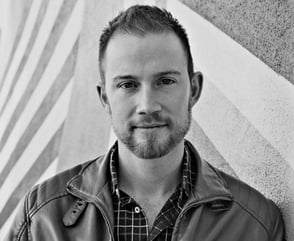 Clayton teaches people how to develop a loving relationship with themselves.

Clayton worked successfully in corporate sales throughout his 20s, but it didn’t take long for him to realize that, while the money was good, he was having the same superficial conversations over and over. He yearned for something more fulfilling.

“I wanted to be involved in a more honest dialogue, and corporate sales just wasn’t cutting it,” Clayton said.

That’s when he connected with a life coach and started working with him. Before long, Clayton became a certified life coach, dove deeper into neuro-linguistic programming, and then branched out on his own.

Clayton considers himself a transformational coach because that’s exactly what he seeks for his clients. He primarily works with women between 35 and 55 and men between 25 and 35. They have weekly or biweekly phone calls, depending on the goals of the client, and coaching typically lasts between three and six months.

“The purpose is to dive deep into how they are creating their current experience. The way they tend to do that is they talk to themselves using certain narratives or stories about themselves that limit certain beliefs,” he said. “Those beliefs may have served them at one point in their lives — perhaps to save them from trauma.”

But they start to realize that the way they see themselves — and other people — isn’t serving their needs anymore. Clayton said his role is to help them question those beliefs upon which they have built their reality. He helps them identify anxieties they may have about dating or recognize that they’re trapped in a cycle of dating the same type of person over and over again.

The result is often what Clayton calls the “2.0 version of yourself.”

Even though many of Clayton’s clients fall into two broad categories, their situations are unique and require different approaches. While he typically works with clients for three to six months, some don’t need that many sessions to have a revelation.

One woman came to Clayton for coaching, and they had one phone session in which she said was considering ending her long-term relationship. But Clayton quickly made her realize that she was suffering from a lack of vulnerability and fear of truly expressing her needs. They agreed that she needed to have an honest talk with her boyfriend before they ended things. 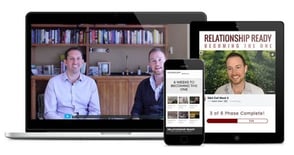 Clayton joined forces with another relationship coach to develop the “Relationship Ready: Becoming the One” online course.

“Well, I didn’t hear from her for a month. Finally, I got an email from her and she said that she and her boyfriend went to the park and had a conversation. Well, the floodgates opened. They had one of the most honest dialogues with each other for the first time in nine months,” Clayton said. “He revealed that he didn’t actually know where he stood with her and how she felt. He was getting discouraged, and after her being able to express her needs, everything shifted.”

The couple moved their relationship from the edge of a breakup to one that was infused with truth, love, honesty, and vulnerability. It’s that kind of success that Clayton said motivates him to continue his work. Recently, he joined forces with another coach to unveil an online course called “Relationship Ready: Becoming the One” geared toward women who are single or struggling in their relationships.

Clayton said he plans to hold in-person retreats as well.

“I see us creating more content and getting deeper into the spiritual aspects of relationships,” he told us. “Watching my clients transform and bring more power to their lives truly inspires me to bring more power to my life. And I never view myself as the one doing something for them, but, instead, we are transforming together and it is a privilege to be part of their life and dialogue.”

If you’re interested, provide your first name and email on the homepage of Clayton’s website, and you’ll receive a free guide called “8 Secrets to Create a Rock Solid Relationship.”