The Scoop:  April Masini has spent the last 15 years sharing empowering dating advice. Her tremendously popular online relationship advice forum, RelationshipAdviceForum.com, has become an invaluable resource for real people with real problems. She has answered over 27,500 questions on the forum. Her professional insights on love, marriage, money, sex, fitness, self-esteem, and family have made April a global influencer and go-to expert for major publications, including Forbes Magazine, The Wall Street Journal, The New York Times, The Chicago Tribune, The Washington Post, Time, BravoTV.com, USA Today, US News & World Report, Reader’s Digest, Elite Daily, and The Huffington Post. April’s energetic commitment to frank, practical relationship advice has established her presence as a trusted authority in the dating industry.

Students graduate from high school knowing how to calculate the hypotenuse of a triangle, but they often have no idea how to figure out if someone likes them, how to flirt, how to date, or how to have a successful relationship.

Then they go out into the world and struggle with dating, relationships, marriage and family because they were never taught the skillsets they need for relationship success.

April Masini recognized that deficit in relationship education, and she filled in the gap. She has spent years studying the dating scene, and her knowledge, experience, and advice have helped singles, couples, and divorcees solve their relationship problems.

For April, it all started with a phone call. She never considered a career as a dating and relationship expert — until the the Learning Annex in Los Angeles invited her to teach a dating course for men.

“I was a television and film producer for ‘Baywatch,’ ‘The Miss Universe Pageant,’ and ‘Blue Crush,’ and the Learning Annex wanted me to teach men how to date a Baywatch babe, a Blue Crush surfer, or a Miss Universe contestant,” she explained. “At first, I thought I was being pranked by a friend, but the call was real. And I was in.”

Three more books followed as did the birth of RelationshipAdviceForum.com, her super popular advice website, and the press picked up on her popularity and insights. She’s been interviewed by The New York Times, The Chicago Tribune, The Washington Post, USA Today, US News & World Report, The Wall Street Journal, Time, Cosmopolitan, Men’s Health, Women’s Health, Glamour, MarketWatch, MarthaStewartWeddings.com, Brides, ABC.com, Today.com, NBC.com, Fox News, BravoTV.com and many, many others.

Whether she’s offering fitness tips, financial insights, or relationship advice, April is a straightforward and uplifting mentor for people all over the world.

Her advice and it’s reach is evolving with the dating industry. “The dating industry tools are booming, April said, “But the relationship problems are not diminishing. Dating apps, dating websites, and modern communication are wonderful — but they’re all being used by human beings with foibles. Modern relationship problems require a real person, giving real advice to help modern people date smart and make wise choices in relationships. That person is me!”

An Affordable Alternative to Coaching & Therapy

Instead of a traditional coaching program, April has a relationship advice forum on her website AskApril.com. She dispenses advice to thousands of members who pay an affordable one-time fee to ask any question from “How do I ask someone out?” to “What can I do to save my relationship?” April said this is a low-cost and fast way for clients to solve their personal problems, and they can do it privately in their own time and from the comfort of their own homes. Singles can also subscribe to the premium private package to ensure only April can read their queries.

“People love my relationship advice site because it gives you what coaching and therapy doesn’t,” she said. “You can access it from your own home, any time, at a low cost. You don’t have to make an appointment — you can even get rush service and anonymous service. Plus, you get me! Lots of my clients have urgent questions and they want quick, frank responses. I don’t sugar coat my advice. It’s polite, but it’s honest — sometimes brutally honest.”

The advice forum is a helpful resource where over 175,000 members have discussed hot topics in the dating scene and looked to April to help them sort out complicated problems. 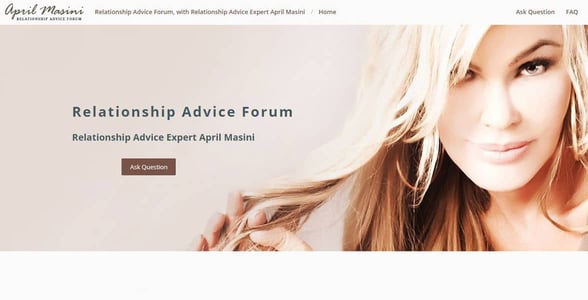 April gives personal, individual advice to public, private, or rush questions that anyone can get.

Rather than wait weeks for an appointment to an expensive therapist or a traditional coach, April offers a low-cost, expedited option for clients. A recent trend in relationship questions has to do with blending families. “The high divorce rate has created more singles who want to date and re-marry,” said April. “These subsequent and sometimes serial marriages create more relationships in each home. There’s the couple, their kids, their kids’ other parents, and those other parents’ partners and their kids. That means more strain,” she said, “and more places for me to give advice to ease all that communication.”

There are currently 175,000 members on the AskApril RelationshipAdviceForum.com. “My relationship advice forum has never been stronger,” April said. “My forum recently surpassed 27,500 questions that have been asked and answered on the site.” April is also responsive to her fans on Twitter. She said her old account was hacked and her photos, tweets and followers stolen, but she recently opened a new account, @AprilMasini, where she actively engages with her social media audience.

Over the years, April has helped singles figure out who pays on a date, how to bring up the subject of debt with a potential partner, and how to approach merging their finances after marriage. April is a big believer in getting a prenup before tying the knot. She compared it to taking out insurance on the relationship and encourages singles to have “The Talk” about money early on.

“Money is a big relationship factor and I get a lot of questions about this,” she said. “Money is still a taboo subject for many people, but not discussing money and financial compatibility is asking for trouble. Money impacts relationships, and if you’re in a mixed-money marriage, where one persons is a saver and the other is a spend, you’ve got a gap to bridge and you probably need help doing it. Financial betrayals, saving for retirement, dealing with debt — these are all modern relationship issues.”

April also helps singles figure out who pays on a date, how to bring up the subject of debt with a potential partner, and how to approach merging finances. April is a big believer in getting a prenup before tying the knot. She compared it to taking out insurance on the relationship and encourages singles to have “The Talk” about money early on in the dating process. Her money-relationship advice extends to holiday and everyday tipping, gift-giving, splitting expenses with roommates, lovers and spouses, and other money-related topics.

“You insure your car, your home, your health — you should insure your insurable assets against divorce.” — April Masini, Forbes Magazine

TD Bank saw her many quotes and interviews about money in relationships on GoBankingRates.com and snapped her up. They hired April to analyze the 2016 TD Bank Love & Money survey and report. April’s responsibilities for TD Bank included co-hosting several live, hour-long Love & Money Q&A sessions on Twitter. Working for and in conjunction with corporations is not new to April. She was also hired by Procter & Gamble, as a spokesperson for their Old Spice “Voice of Experience” campaign. Her ability to interface fluidly with both unique individuals on her forum, on live, fast Twitter chats, and with corporate executives in the business world, is part of her magnetic success.

April’s advice on tipping, gift-giving, splitting the bill, and other money-related topics can help daters put complex matters into concrete terms and work out solutions based on the dating expert’s experiences.

Subsequently, The Wall Street Journal invited her to participate in a podcast episode to discuss the etiquette of who pays on a first date. “I enjoyed a spirited tussle with WSJ podcast host, Quentin Fottrell, who shared an opposing view to mine,” April said. “I come from the point of view that whoever asks for the date should pay — but since I don’t think women should ask men out, by default, the guy should pay.”

This opinion sparked a debate among the panelists that reflects the ongoing conversation between modern daters who struggle to decide how to behave when it comes time to pick up the tab. “Money is a great way to gauge where things are,” said April. “If he wants to spring for another dinner and a movie, he’s investing his money and his time and his emotions in the date. When you split things, no matter how politically correct that may be, there’s a bigger price to pay later.”

In addition to being a dating guru and financial adviser, April is also a well-known sexpert who has shared intimate advice in columns on AskMen.com and The Women’s Health magazine. She has been quoted as a relationship expert on some of the world’s most influential and widely read platforms, including USAToday, US News & World Report, BravoTV, MarthaStewartWeddings.com, and ReadersDigest.com.

Whenever a popular magazine, journal, or newspaper reaches out to her for a quote, April eagerly agrees to contribute her two cents because she takes pride in the vote of confidence.

April Masini has become the go-to love and money relationship expert in the press.

A new vector this relationship expert is taking is improved health and fitness. “Body image can impact self-esteem, which can impact the health of all personal relationships,” April said. “The way you feel and the shape you’re in affects your behavior — with yourself and with others. In fact, one of the biggest problems in marriages is people get complacent and letting themselves go. This creates a downward spiral that affects self-esteem and the relationship.”

That’s why April is considering writing a fifth book with a focus on being #FitOver40. April plans to collaborate with friend and professional functional medicine expert, who focuses on endocrinology and health, Elizabeth Tringali. They are planning to write a practical guide for people who want to transform themselves and their relationships through improved health and fitness.

Media outlets like BravoTV.com also trust April to provide sound insights in the celebrity and entertainment world. April has dissected the body language between celeb couples and analyzed the wardrobe choice of notable individuals, including Meghan Markle and Khloe Kardashian.

Whether she’s advising individuals on her forum or the readers of an online magazine, April has a wealth of expertise on a variety of topics, including love, money, celebrities, fitness, and social etiquette. Her down-to-earth and helpful attitude has made her one of the most trusted and influential sources of information for singles and media outlets across the US.

Schools may not teach the basics of building relationships and living a good life, but April has made it her mission to fill that gap and provide sound guidance based on her personal experiences.

“No matter what happens in the world, relationships are basic,” she said. “The impact I hope to have on the dating industry — and on all people in all sorts of relationships — is to give them more clarity, more ability to communicate, and more success in their relationships.”

TrueLDS is a Wholesome Dating Community

These 15 Dating Sites Help Divorcees Get Back Out There