The Scoop: Ziggeo offers award-winning video API to tech companies looking to upgrade their online services, and its video playback and recording software has the potential to change the online dating scene. Video features can create more transparency, trust, and engagement on dating platforms both big and small. With its streamlined solutions, Ziggeo facilitates online and mobile video integration that can help users express themselves in more compelling ways.

Swiping through profile after profile on a dating app can sometimes lead singles to view people as if they were disposable commodities. According to one study, the typical online dater spends between 58 and 84 seconds assessing a profile before deciding to like or discard it. Such a quick matching process fosters snap judgments, and that can make it difficult for singles to get to know the real person behind the bathroom selfie.

In response to swiping culture, some dating platforms have begun seeking ways to add greater value to the dating experience and encourage singles to show more personality in their profiles. Videos have become an integral part of that movement.

Ziggeo’s technology can give singles the chance to see and hear an online date prospect in a new light.

Unlike a static picture and dry text, a video can capture an individual’s personality quirks and emotions, and that can prompt singles to hit play on a new connection.

A software company called Ziggeo has created video solutions to support tech professionals and increase online engagement in a variety of fields.

Ziggeo can assist dating platforms by promoting and perfecting video communication between singles. Its video API can lend greater legitimacy to dating profiles and facilitate more authentic chats in the online dating scene.

Ziggeo’s video software can create a fun and safe user experience for people of all ages. The team handles all the technical details and can offer custom backend support to meet the needs of specific companies. For instance, Ziggeo can use machine-learning technology to automatically screen user-posted videos and remove any videos that feature inappropriate content, including nudity and hate speech.

With the support of the Ziggeo team, dating site owners can increase traffic, build success stories, and enrich the online dating experience one video at a time.

“I’m very much a technologist,” Ziggeo Founder and CTO Oliver Friedmann said. “I like to create tools that are versatile and can be used to help other people.”

In 2013, Ziggeo began as a recruitment platform where job candidates could post video applications and employers could conduct video interviews. The video technology fostered many profitable connections, and the development team saw its potential to impact other areas of a user’s professional and personal life.

The Ziggeo team decided to expand its reach and revenue by selling its video API to other companies. This cloud-based video recording, transcoding, and playback system quickly became a game changer in the tech space.

“Once we transitioned and became an API software company, some of our competitors became our customers,” Oliver said. “We took a bold step, and it opened us up to other verticals.”

Ziggeo was one of the first companies to offer video recruitment tools, and now it is one of the only tech companies offering all-purpose video solutions for businesses in a variety of industries, and that includes the dating industry.

Ziggeo has attracted many high-profile customers, including Netflix, Spotify, Fiverr, and Swiss Post.

From tech experts to festival organizers, and from capital investors to best-selling authors, many professionals have used Ziggeo’s video tools to attract an online audience and engage people in a niche community.

“We realized our video technology was superior to our competitors, and we thought we could go a little deeper by offering it to other verticals,” Oliver said. “It’s a pure software company now. We do all the heavy lifting for our customers.”

Ziggeo’s API and software package has given tech companies and entrepreneurs the opportunity to upgrade online and mobile products to include video recording and playback features. The Ziggeo team supplies the video expertise and technical assistance to enhance marketing campaigns, online services, and mobile products. Its technology can transform the look and feel of a digital space.

For the online dating world, that can mean more interactive dating profiles and more flirtatious conversations conducted via video. Experts have long predicted that video would be the future of online dating, and Ziggeo can finally make it happen with its time-tested API.

As Zoosk dating expert Megan Murray said, “Video profiles mean no more long descriptions, lists of hobbies, or nights spent trying to come up with something witty or clever to get some attention.”

Over the years, Ziggeo has collaborated with dozens of leaders in the tech world and developed solutions that change the way users interact with one another online. By promoting user-friendly video tools, Ziggeo has enriched the online and mobile experience and facilitated the creation of many unique communities across the web.

The company’s case studies and testimonials can speak to its impact on businesses around the world. 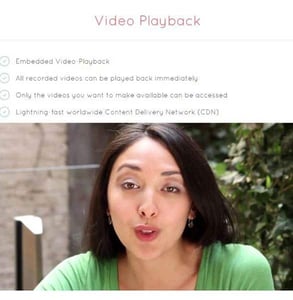 The online marketplace Fiverr integrated Ziggeo’s API into a marketing campaign designed to capture video stories from its community. The company wanted to answer the question, “What does Fiverr make possible for you?” And many people sent video responses to this prompt.

Brent Messenger, Global Head of Community at Fiverr, said the video tools inspired Fiverr customers to engage with one another in more meaningful ways.

Jonathan Pasky, the Executive Producer and Co-Founder of DevNetwork, said Ziggeo deserves every honor and award bestowed upon it. “Ziggeo is a shining example of the API technologies now empowering developers & engineers to build upon the backbone of the multi-trillion-dollar market for API-driven products and services,” he said.

The Ziggeo team is always looking to the future and developing useful and efficient solutions in the tech sector. Oliver told us he’s currently working on features for the video recorder, and he expects to add audio-only and image-only features in the next few months.

As Ziggeo builds its reputation and expands its reach, the software company can help tech startups, tech giants, and everyone in between bring valuable video tools to a tech-savvy audience.

At the end of the day, Ziggeo’s mission is to empower businesses to build communities and add a personal touch to digital spaces, and that’s something dating sites and apps could definitely use. Whether adding videos on profiles or facilitating video comments, dating platforms can transform the online dating experience thanks to the Ziggeo API.

“We try to automate as much as we can,” Oliver said. “That’s why we can offer such a low-cost-per-volume service to our customers.”