The Scoop: For over 70 years, the Kinsey Institute at Indiana University has led many research projects that inform our knowledge about human sexuality, relationships, and gender. Its interdisciplinary researchers aim to answer important questions in modern society. In March 2020, the Kinsey Institute launched an in-depth study on over 1,000 participants to see how singles and couples coped as coronavirus lockdowns caused a silent pandemic of loneliness.

March 2020 was a turning point for singles, couples, and families around the world. People had to take on new challenges as, one by one, stay-at-home orders went into place in cities, states, and countries experiencing coronavirus outbreaks.

During these lockdowns, some families were stuck in overcrowded houses, while some singles were isolated in studio apartments. Countless people saw their routines disrupted as they grappled with unemployment or adjusted to work-from-home schedules.

The Kinsey Institute at Indiana University has been studying sex and relationships for over 70 years.

The coronavirus pandemic prompted an era of social distancing, and no one knew how that new normal would impact an individual’s psyche. But a small group of researchers at the Kinsey Institute have been determined to find out.

The Kinsey Institute at Indiana University launched a series of surveys in 2020 to check in with singles and couples around the world. The first three surveys went out in March and April, and the researchers have followed up with 1,400 participants every month since to collect data on their experiences with dating, sex, and relationships during an unprecedented time.

Amanda Gesselman, Ph.D., is one of the research scientists working on this project. She said the Kinsey Institute plans to conduct a total of 10 surveys that delve into how interpersonal connections and mental health are changing during the global pandemic.

“There are four of us working on this study, and I don’t think any of us expected it to be this large at the outset,” Amanda said. “When the lockdowns started, we realized it would be impactful on relationships and dating, so we wanted to document what was happening — and we were blown away by how many people are interested in the study.”

Anecdotal evidence of loneliness during the coronavirus pandemic abounds, but researchers at the Kinsey Institute are interested in getting hard data on people’s lived experiences with sex and relationships. The Kinsey Institute’s study has reached thousands of individuals in 100 countries, but over half of its participants live in North America.

The first survey went out on March 20th — just before students at Indiana University went on spring break. The researchers didn’t know at the time that lockdowns would last for months. They originally released three surveys on a biweekly schedule, and now they have extended the study to include up to 10 surveys over the course of the year.

“During those first weeks, it was chaotic and things were changing all the time,” Amanda explained. “Now people are in a lockdown routine, so things are less likely to change as quickly, so we decided to send out the surveys at monthly intervals.”

The Kinsey Institute’s study has looked at various behaviors, habits, and attitudes in the dating and relationship space. Its research goal is to track how newly imposed social distancing norms have weakened or strengthened interpersonal connections.

The researchers expected to see drastic changes in how people engage with one another, and they wanted to determine how those changes have impacted the mental health of singles and couples all over the world.

“We cover all different aspects of sexuality and relationships to see what’s changing and how permanent those changes are,” Amanda said. “We have also been open to collaborations on related projects to try to cast the widest net on behavior, so we can determine what’s going wrong and what’s going right.”

Dating in the middle of a pandemic is complicated, to say the least. When bars and nightclubs closed their doors, millions of singles experienced a dramatic drop in their romantic prospects. The question is: What did they do to make up for it? When a bar door closed, did an online dating window open?

The Kinsey Institute’s study specifically asked singles about their online dating behaviors. The researchers theorized that more singles would turn to apps and sites when they couldn’t connect in person. 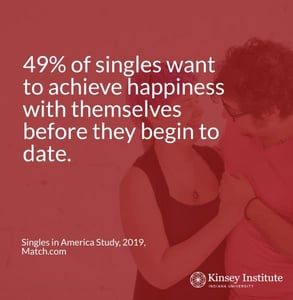 The Kinsey Institute’s online dating findings backs the data released by many popular apps that saw an increase in online traffic and messaging in the spring of 2020.

As a whole, online daters seemed to adapt to the new normal of social distancing by spending more time in the virtual dating scene and reaching out to more potential dates through their favorite app or site. During this time of uncertainty, the Kinsey Institute’s surveys show that short-term dating and casual sexting was on the rise, while long-term relationship goals went on the back burner.

About 40% of respondents said they saw an increase in sexually explicit messages in March and April, and only 27% said they were interested in building a serious relationship with an online crush.

“People are definitely getting a lot more attention on dating apps and sites,” Amanda noted. “They’re engaging in more conversations and really widening their net to meet new people.”

About 75% of Couples Said Their Sex Life Has Declined

The Kinsey Institute recognizes that singles aren’t the only ones struggling to connect during the coronavirus pandemic. Many couples have faced relationship challenges that impact their intimacy and overall satisfaction.

Early survey results show that many people’s sex lives suffered in the spring of 2020. About 75% of cohabiting couples reported that their sex life declined during quarantine. 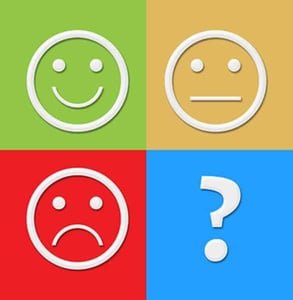 Couples reported higher levels of sexual activity and relationship satisfaction when they made an effort to connect.

However, the researchers found that some couples were actively trying to keep the spark alive, and their efforts tended to yield good results. About 20% of couples said they were trying new things in the bedroom — different positions, sex toys, exploring fantasies, etc. — and they reported greater satisfaction with their sex lives.

“People who are exploring new ways to be sexually expressive and control their sexual satisfaction got a buffer from the sexual decline,” Amanda concluded.

Overall relationship satisfaction was more of a mixed bag among respondents. The Kinsey Institute’s study found that relationship issues were magnified during lockdown situations. Couples who said they were unhappy in their relationship before the pandemic were even worse off once they were stuck inside with their romantic partner.

On the flip side, couples who were happy with each other before the pandemic were more likely to say the lockdown strengthened their relationship.

The Kinsey Institute Finds Resilience in the New Normal

Life changed for many people in the spring of 2020, and no one knew at the time how long lockdowns and social distancing measures would endure. It was a period of deep uncertainty when many questions were raised about how businesses, schools, relationships, and society as a whole could move forward.

The Kinsey Institute at Indiana University has endeavored to find answers regarding the pandemic’s impact on personal relationships. Its dedicated researchers have created surveys that get to the heart of how people find ways to connect — even while remaining physically disconnected.

Over the past few months, the Kinsey Institute has made headlines by identifying trends in the modern dating scene. The research shows that some singles are making more of an effort to put themselves out there, while some existing couples have grown closer through the crisis. The study is ongoing and will undoubtedly yield more insights into how online dating, sexual satisfaction, and relationship health is changing in 2020.

“It’s a whole new world. And there’s no way anyone could prepare for it,” Amanda said. “This is the first time we’ve ever seen this, and that’s what studies are all about — finding new discoveries and creating new knowledge.”