Since it launched in 1995, Match.com has established an online dating empire the likes of which has never been seen before. Today it claims the title of the oldest and most successful dating site with over 10 million success stories to its name — and counting.

Match has tremendous authority when it comes to the online dating industry, and its ability to keep pace with what singles want is undeniably impressive. Fortunately for us, Match often shares the lessons it has learned from its millions of users and decades of experience in the industry. The company conducts an annual survey of American singles to take the pulse of this ever-changing demographic and find out what’s going on beyond the website and app.

In 2018, the eighth annual Singles in America survey shared the views of 5,000 singles of all ages, incomes, and ethnicities. The results give us insight into the mindset and habits of today’s single American.

1. On a First Date, Compliments are King

Dating sites and apps can track what users say in their online conversations, but, once users leave the interface, their successes or failures often go without explanation. That’s why Match’s survey delves into the mystery of the first date to get some concrete answers about what works and what doesn’t for modern daters.

“The one thing women want to feel on first date is comfortable.” — Match.com’s Singles in America survey

However, an overwhelming majority — 90% of singles — agreed that they’d be impressed by someone who complimented their physical appearance. Women were particularly enthusiastic about admiring dates. About 94% of female singles said they like it when their dates say something nice about how they look. All it takes is a simple “You have beautiful eyes” or “I like your hair” for singles to impress a date and make a good first impression.

Match also reported that single women like it when men insist on paying, hug them in greeting, and arrive early on a first date. Tardiness and drinking more than two drinks were not as well-received by single women.

2. Over 25% of Women Never Wear Makeup on a First Date

A new generation of women have taken to the dating world, and some are set upon changing the gendered rules and expectations of being single. About 29% of women surveyed by Match said they do not wear makeup on a daily basis and would not wear makeup on a first, second, third, or nth date. These singles sport a more natural look and expect their dates to like them as is.

Of course, some single women still cling to their CoverGirl and feel naked without their NARS. According to Match’s survey, 9% of single women said they will always wear makeup when around a romantic partner — even after they’ve moved in together.

Meanwhile, 27% of single men say they would never be ungroomed around a partner, and 37% say they would continue manscaping after getting into a serious relationship.

Overall, many singles said they care about looking good for their partners, but not everyone is willing to put that much effort into it.

3. Talking Politics With a Date Isn’t All That Divisive

Many dating advice articles warn singles to never ever bring up politics because it could incite an argument or insult a date. However, American singles don’t see it as such an unequivocal calamity. In fact, 72% of singles in Match’s survey said they’re willing to date across party lines.

If the subject of politics were to come up on a first date and they disagreed on something, 45% of respondents said they would try to understand their date’s perspective on the issue. An additional 19% said they wouldn’t say anything to provoke an argument or prolong the discussion. 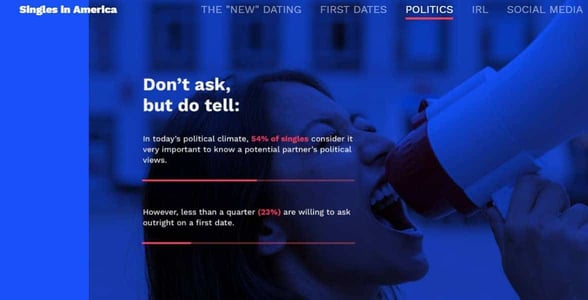 Even though over half of daters say politics is important, only 23% of singles are willing to ask about it on a first date.

Only 11% of American singles said they would argue with their date, and only 5% said they feel strongly enough about politics to get up and leave if their date disagreed with them.

While it’s certainly a tricky subject, most American singles seem to be willing to listen to the other side and make allowances for differences in opinion.

4. Half of Singles Have Been in a Friends-With-Benefits Relationship at Some Point

Over half the singles in Match.com’s survey (55%) said they had been in a friends-with-benefits relationship. And they’re not ashamed. In fact, 86% of respondents said they don’t regret their FWB relationships.

This factor trumped exclusivity and personal boundaries in the survey. That is, more singles expressed a need for birth control than control over their partners. While these singles may be open to sexual relationships with no strings attached, they make sure those fancy-free nights don’t come with unwanted commitments or repercussions.

5. Nearly One-Third of Couples Hanging Out Wound Up in Serious Relationships

In its annual survey, Match found a growing segment of today’s singles aren’t necessarily looking for commitment in their lives. When asked if they have had a “hanging out relationship,” 40% of singles answered yes. However, those connections aren’t necessarily going nowhere — 45% of surveyed singles said they had been in a friends-with-benefits relationship that had evolved into a real relationship. 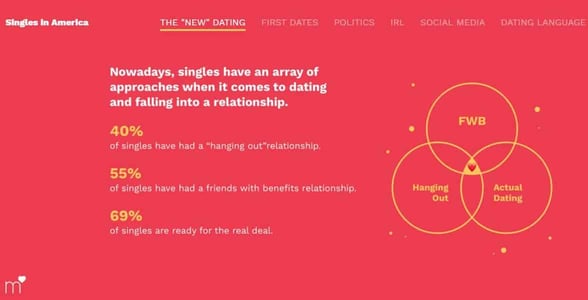 Survey results revealed that sometimes a hanging-out relationship looks rather similar to the traditional dating relationship. For instance, 48% of singles in the survey said they split the bill when just hanging out, and 58% said that it’s A-OK to pick a just-friend up from his or her house to hang out.

While some singles expressed a reluctance to put labels on a relationship or rush into commitment, that doesn’t mean they aren’t interested in strolling into the sunset with that special someone. Many just prefer to keep things light at the outset.

According to the site, “Casual dating, or ‘hanging out,’ has become a popular, non-committal way for singles to find companionship.”

Online dating brands cannot observe the in-real-life (IRL) part of dating, but they can ask singles about what goes on during those all-important in-person dates. Match inquired into common offline activities like what’s in your queue when your date comes over.

About 82% of surveyed singles said they like to play a movie, while 69% said they rely on Netflix or Hulu to entertain a date. Half of the singles surveyed answered they watch YouTube videos or sports games with their dates.

Match’s survey results identified Austin, Texas, as home to “the worst behaved men.” According to the survey, singles in this city are 549% more likely to ghost and 400% more likely to breadcrumb (sporadically contact a love interest to keep him or her on the hook). Additionally, Austin singles are 247% more likely to constantly check their phones on a first date. 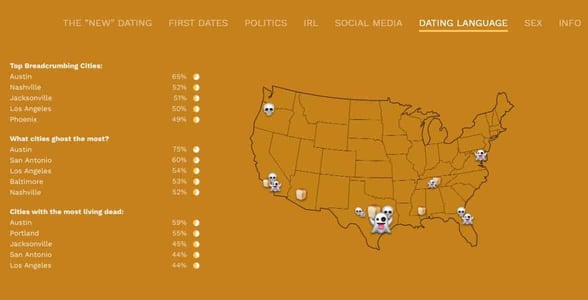 Men in Texas’ big cities showed the highest propensity for bad dating behavior such as ghosting.

Meanwhile, only 44% of Los Angeles singles said they’d had a zombie encounter, which means an ex initiates contact out of the blue, 59% of Austin singles said someone they’d dated had tried to revive a dead relationship. Overall, the Austin dating scene didn’t come off very well in the Match survey of American singles.

8. Singles Who’ve Been Ghosted are 125% More Likely to Go on a Date

There’s a silver lining for singles who have been ghosted by someone they met online. According to Match, American singles who experience a rejection have a good chance (64% higher than average) of having sex in the same year.

These spurned singles are also 125% more likely to go on a date than are singles who have never been left hanging by a date. This apparent correlation between ghosting and dating success is heartening for singles who may feel discouraged after a rejection. It’s important to know that being ghosted is a temporary setback that happens to pretty much every modern dater at one time or another.

Overall, those singles who are out there actively dating and leaving everything on the field are the ones who are ultimately going to have success. These singles want to make something happen, and they aren’t deterred by the occasional ghost, zombie, or breadcrumb. That just comes with the territory.

9. About 82% of Single Women Prefer Their Dates Not to Have a Roommate

Singles expressed surprisingly strong opinions — some strong enough to be deal breakers — regarding a date’s living arrangements. About 82% of single women in the survey said they find it a turnoff if their date has a roommate. Overall, 69% of dates (both men and women) said having a roommate was a major turnoff for them. Women are more likely than men to prefer to date someone living alone. Perhaps single women are more sensitive to the roommate issue because comfort is a high priority for them. In the survey, 79% of single women said the one thing they want to feel on a first date is comfortable, and having a roommate interrupting a makeout session is definitely uncomfortable. 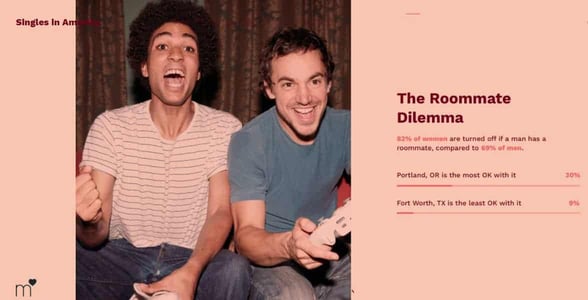 Women were more likely than men to feel bothered if their date lives with a roommate.

Nevertheless, singles do seem to make allowances for some aspects of the relationship as 52% said bad sex wouldn’t be a dealbreaker until after it had happened a few times, and 16% said it’s never a dealbreaker. When asked to grade their sex lives, 55% of respondents gave it a B or C. Both men and women ranked “too much talking” as the worst bad behavior of consensual sex. About 75% of men and 88% of women said talking a lot during sex was a turnoff, and yet 78% of respondents put good communication among the top five ingredients of satisfying consensual sex.

When it comes to dealbreakers, everyone has their own opinions and tolerance levels, but some things, like living with a roommate, show up consistently as a no-no among today’s American singles.

Singles in America: The Year’s Most Comprehensive Study of Dating Life

Match.com became a giant in the dating industry by listening to the needs and desires of singles and pioneering ways to help them connect online.

The leadership team understands that the single population is constantly changing, so they make an effort to keep up with what singles are thinking by conducting an annual survey.

The Singles in America survey delves into the details of what goes on outside the dating platform to identify the factors that make relationships succeed or fail. With this information, the team can devise ways to guide, serve, and satisfy singles of all walks of life. You can read a lot into this information-dense study about today’s dating scene.