The Scoop: Partners who didn’t grow up speaking the same language may have trouble communicating at times. Timekettle can help those couples who want to understand each other while improving their language skills. The in-ear device offers real-time translation capabilities that allow users to understand other people quickly. Partners can wear earbuds and talk at an efficient, natural pace, increasing the speed of conversations by up to 50%.

People often find themselves in situations where they don’t understand the language someone else is speaking. Sometimes, they may have an intermediary who can translate for them, but that luxury isn’t always available. That’s especially true if someone lives in a place where they don’t speak the language or if they have a language barrier with a partner.

Timekettle solves those dilemmas with its wearable devices that translate languages in real time, and two users can wear Timekettle earbuds so they can converse naturally and understand each other clearly.

Kazaf Ye, Timekettle’s Marketing and Public Relations Manager, told us about one situation in which Timekettle was instrumental in helping people communicate.

One Timekettle customer, a man from the Philippines, married a woman from the United States. Though he spoke some English, he still struggled to communicate with his American in-laws. But Timekettle devices allowed him to have a fluid conversation with them.

Kazaf also shared the story of an English-speaking priest assigned to work in a Spanish-speaking community.

“He was excited about our product and how it could help him immerse himself in the community and help him understand the people,” Kazaf said.

Timekettle earbuds can also help couples in intercultural relationships. Though partners may understand a common language, it can be tiresome to continually think in one language and speak in another. Timekettle technology and its advanced translation system can help couples mitigate cultural misunderstandings, too.

The Timekettle team aims to make products as immersive as possible. That means speeding up conversations by translating into a user’s earpiece in real time.

For example, when two partners are having a conversation, one says something in one language and waits for another person to hear it in their earbud. Then that person responds in his or her preferred language.

The system speeds up traditional translation by 50% because the real-time aspect means it flows more like a real conversation.

Timekettle also differentiates by focusing on daily, natural conversations people have, rather than on formal communication.

Timekettle can make it easier for intercultural couples to communicate.

“We are more focused on real interactions in live scenarios,” Kazaf said.

That means the device is more attuned to casual conversations than other translation systems, and Timekettle can understand and translate more than 40 languages — spoken by more than 95% of the world.

The device also features 93 different accents to help discussions feel more natural. For example, if a user is from the United Kingdom, he or she may choose a British accent for the English translations, rather than an American one.

That natural, seamless integration into people’s lives has helped Timekettle attract many user demographics, including partners and families.

“An interesting demographic we didn’t expect was cross-cultural families where husbands and wives come from different language backgrounds. Our products provide them with natural conversations just like they were speaking and listening in their native language,” Kazaf told us.

A Range of Products and Unique Functions

Timekettle offers three products that help users, depending on their situations and budgets.

The company’s flagship products are the WT2 Plus Translator Earbuds. These earbuds offer accuracy and fluency in conversations where two people need help with translation.

For those only looking to record conversations and translate them, the ZERO Translator is an effective solution.

Kazaf said he recommends the M2 Translator Earbuds for most couples. The company designed the product especially for the general public, with versatility and affordability in mind. 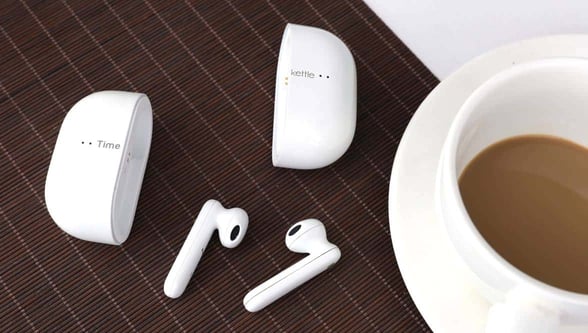 The in-ear Timekettle devices are small, portable, and have a long battery life.

Traditional translation systems offered just one device that users would hand back and forth, as well as a button to press before they spoke. But Timekettle technology picks up voices in the earbuds and begins translation simultaneously.

“We’re proud of our designs and how we encourage people to communicate and connect,” Kazaf said.

Timekettle devices also include three settings that adjust to the user’s environment. The first is Simul Mode, designed for quiet environments in which one person is speaking without stopping. Both users will wear the earbuds, and Timekettle translates in real time.

Touch Mode is designed for louder places and only translates a spoken sentence if a user presses a button.

The last setting is speaker mode. In this case, the user is the only one speaking, and Timekettle picks up what he or she is saying and records it.

Couples frequently use Timekettle products in informal situations where they need to understand each other, and the accuracy of these translations is about 93%.

Those using the product with a partner often have educational goals in mind. After a while, they may start learning the language and practice speaking and listening without translation help. Those who are learning a new language, but just want to take a break from practicing and relax with a partner, can also benefit from Timekettle.

Though Timekettle has only operated for three years, its team has already made significant strides to disrupt the translation industry. For instance, Timekettle was the first company to offer offline translation earbuds that don’t require wifi. 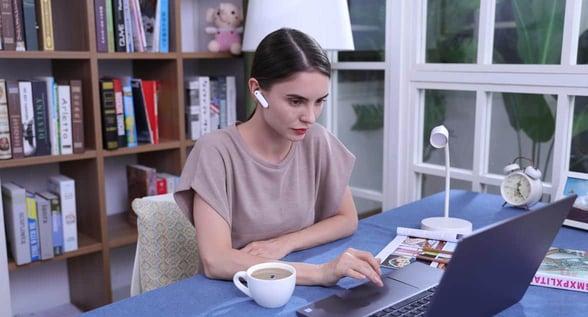 People can also use Timekettle to become more proficient in speaking new languages.

But the 30-person international team has goals to improve intercultural communication between people who don’t speak the same language. The team is currently planning to launch a newer version of its WT2 Plus system to the public.

Timekettle also aims to improve communication between people who aren’t from the same cultural backgrounds. Even if two people speak the same language, they may still find themselves misunderstanding body language or the connotations of words or phrases.

“Timekettle envisions itself as a global brand specializing in communication products — not only translators. One day, we hope that, with our products, barriers will seem like they were never there and that we are all speaking the same language,” Kazaf said.