The Scoop: Feathered Pipe Ranch has been a popular destination for individuals and couples for nearly 45 years. The ranch specializes in hosting yoga retreats, and it often attracts couples who want to strengthen their practice in a serene environment. Guests from around the world travel to Feathered Pipe Ranch, located in Montana, to disconnect from their hectic lives and reconnect with themselves and others. For its atmosphere that fosters togetherness, Feathered Pipe Ranch has earned our Editors’ Choice Award™ as a romantic getaway for mindful couples.

Feathered Pipe Ranch strives to help guests disconnect from the outside world and reconnect with themselves and others. Situated in the picturesque mountains near Helena, Montana, its retreat center has hosted meditation and yoga wellness activities since well before they were trendy.

Couples often travel to Feathered Pipe Ranch for romantic getaways, where they can devote their time to practicing yoga and spending time together in nature.

“We find that many couples come to our programs to develop practices that help them focus on themselves, and each other,” said Eric Myers, Feathered Pipe Foundation IT and Networking Director.

Couples who want to attend a yoga retreat at Feathered Pipe Ranch will have plenty of time to spend together, as the shortest packages it offers are a week long.

“It takes five to seven days for someone to settle in, decompress, and be open to what is surrounding them. A weekend trip isn’t long enough,” Eric said.

Feathered Pipe Ranch offers week-long getaways through which couples can connect to nature and each other.

Feathered Pipe Ranch isn’t a retreat that requires a hefty fee to book. Instead, the retreat center offers affordable packages and options that make it accessible to more people. Couples can choose their desired accommodations, which range from a yurt or a glamping tent with a queen size bed to a more upscale chalet.

Once at Feathered Pipe Ranch, guests can attend daily yoga/meditation sessions, which take place for a few hours each morning and another few hours later in the afternoon. In the meantime, guests are free to explore on their own.

“You get to experience nature in the Rocky Mountains and the surrounding National Forests. People can wander and be with themselves, and not have to worry about noise and the hustle and bustle of everyday urban life,” Eric said.

Feathered Pipe Ranch wasn’t always designed to be a yoga center. In the 1960s, Founder India Supera traveled to Asia, where she lived for a number of years in an ashram in South India with her spiritual guide, Sathya Sai Baba. There, she learned meditation and yoga practices, but most importantly the value of service to others that really shaped the mission that she would follow for the rest of her life. 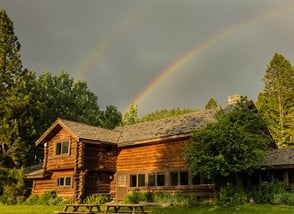 In the early 1970s, India returned to help Jermain Duncan, a dear friend dying of cancer, through her final months. Before she died, Jermain gifted her ranch to India. At first, India wasn’t sure what to do with the property.

She returned to India intending to give the ranch to her guru, but surprisingly was instructed to return to America and turn the ranch into a place where people could deepen their spirituality.

“She was interested in facilitating people to learn to live together, in nature, and with themselves in a new way,” Eric said.

India received the ranch in 1972, and three years later, she hosted the center’s first yoga retreat. That was before yoga began to gain popularity. Montana’s pristine nature turned out to be a serene, if not unlikely place for the retreat center that aimed to make holistic wellness more commonplace in the U.S.

“An intentional community evolved from her idea, and we’re three generations in now. India’s children are all either staff or involved with the foundation, and their children are now getting involved, as well,” Eric said.

Reconnect with Your Partner in Nature

Over Feathered Pipe’s 45 years in business, it has developed a reputation as a friendly place that welcomes guests with open arms.

That kind, communal spirit draws guests of all ages and backgrounds to rural Montana. Feathered Pipe Ranch has hosted yoga lovers from around the world, including the Middle East, India, Southeast Asia, Europe, and South America.

Many of those guests come back year after year, and these alumni often check in with India, who still owns the ranch, and the many animals that roam the property. Even if they’ve never come to the retreat, guests are treated warmly by the staff and other participants.

“People are really struck with that feeling of family that doesn’t take years to develop. They feel it on the first day,” Eric said.

Perhaps the reason Feathered Pipe Ranch has such a diverse array of guests is because it doesn’t prescribe to any particular religious practices or lifestyles. For example, while the ranch can accommodate vegetarian and other special diets, it still serves meat dishes for non-vegetarians.

“We don’t identify with any particular spirituality or way of being,” said Eric.

The ranch also offers more serious yoga practice and hosts participants who are often intensely focused on wellness and peace of mind. Because of that commitment to tradition and accessibility, Feathered Pipe Ranch maintains a strong reputation within the community.

“’Yoga Journal’ ranked us the number one retreat in the world — even over luxury spas,” Eric said.

Feathered Pipe Ranch’s biggest draw for couples is that it helps them get off the grid and focus on each other. Though internet is available in all of the main buildings, couples may have to walk to the parking lot to connect to cell service which is spotty that far back in the mountains. This ability to easily disconnect from the outside world encourages couples to unplug and let their guard down.

“It’s tough for couples to get the static out of their lives and remind themselves why they’re together. The ranch offers that opportunity, and that’s of great value in today’s society,” Eric said.

If couples want to take that mission to heart, they can sign up for the retreat center’s annual Mindful Unplug, a weeklong digital detox that helps participants disconnect from modern life. Instead of using their mobile devices or watching TV, they can practice West African hand drumming or participatory sound and movement activities. 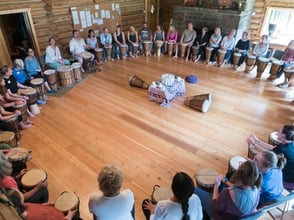 “It’s so hard to de-stress and get back to who you are and what your relationships are about. We’ve seen this program attract a lot of couples who want to unplug and reconnect with each other,” Eric said.

In addition, 2020 will mark the 45th anniversary of the first yoga retreat, an occasion that Feathered Pipe Ranch plans to celebrate. Several yoga teachers who first taught at the center all those years ago will return. The ranch has also invited big names in the wellness world to lead week-long programs.

As Feathered Pipe Ranch continues through its fourth decade in operation, it still strives to offer serious, affordable retreats for people who want to relax in nature. That mission is likely what has kept it so relevant with three generations of yoga lovers.

“We believe in what we’re doing and in offering a unique experience in the world of yoga travel vacations,” Eric said. “And we’re already booking into 2021.”