The Scoop: Saving money on airfare while visiting more cities may be the ultimate travel hack. Airwander, an intelligent flight search engine, has developed a way for travelers to plan those adventurous stopovers on the way to their destinations. Stopovers often reduce the overall cost of a ticket while providing individuals, couples, and families more time to explore new cities during a trip. Airwander Founders Ela Bader and Douglas Deming started the website after realizing how hard it was to plan stopovers along the way. Now, they — and many other people — use the platform’s technology to make traveling even more fun.

Ela Bader and Douglas Deming met in 2014 at Burning Man, an annual festival held in the Nevada desert. After spending some time together, they decided that an epic travel adventure was a natural next step, and they began planning an eight-month backpacking trip to South America.

However, instead of flying directly to their destination, Ela and Douglas wanted to include several stopovers so they could see as much of the region as possible. When it took days to prepare an itinerary and purchase the tickets, they realized they could develop a better way.

After their trip, Douglas and Ela designed an innovative website not only for themselves but also for individuals, couples, and families who wanted to explore more locations on their getaways.

“It was mainly out of our own need because we’re a traveling couple ourselves,” Douglas said. “We were manually combining flights, trying to price out stopovers on our routes, and we knew we were missing out on some efficient predicted routes. So we decided to build a predictive software called Airwander. It finds that perfect option for any destination.” 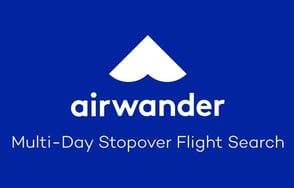 Airwander allows couples to plan stopovers during their trips and even save money in the process.

They began developing the app in 2014, with the first version of the technology released the following year. The venture rebranded as Airwander in 2016 and made further enhancements to the platform. The current version launched in July 2018 and has been growing in popularity ever since.

Part of the reason why Airwander makes so much sense is that it’s more than just a way for travelers to add a destination along their route. It can also find cheaper flights by mixing and matching an itinerary.

“Airwander is a flight search engine that allows you to stretch your travels and reduce your cost, so it’s a win-win,” Douglas told us.

That means couples can use that extra money for romantic meals or accommodations and spend time together in new and exciting places.

Less Cost, More Fun: Appealing to Travelers of All Ages

Douglas and Ela primarily run Airwander, and the couple has lived in California, Spain, Hawaii, and Thailand. Currently, they live in Poland, where they work remotely with a programmer who helps them with the site.

“We work remotely because we really like to take advantage of this time and age where we can work virtually,” Douglas said.

That’s part of the reason why they understand their target demographic so well. The majority of Airwander users are between the ages of 24 and 36 and include plenty of couples planning honeymoons, city-hopping trips, or romantic adventures. The platform also caters to younger users planning backpacking trips, as well as retirees who are finally living their dreams of seeing the world.

“We find that Airwander users are very adventurous and avid travelers, so they see this as an opportunity,” Douglas said. “Maybe they were planning a stopover themselves, and then they discover Airwander as a valuable tool. It requires a lot of confidence to be a traveler, and to travel anywhere.”

Douglas was excited when he met a woman who had used the site while he was in Thailand. She had been traveling the world with her boyfriend when a friend recommended Airwander. As a result, she saved money while seeing another city that she otherwise would have flown right over.

“We’re making that impact,” he said. “It takes a drive and excitement for wandering to travel to multiple destinations.”

An Intuitive Interface Means Trip Planning is a Win-Win

Airwander is so popular because it makes it simple for travelers to include what Douglas called a “bonus city” in their vacation.

“You get a bonus city, and you get to reduce the cost of your flight. We believe it is the most optimal way to fly,” Douglas said. “When you enter the site, you use it like any other flight search engine. You input your origin, destination, dates, and then your trip type.”

But that’s when the site starts to differentiate itself. Once users select an origin and destination, the site gives them the option to add a stopover city. They can also choose the number of days they’d like to spend there. 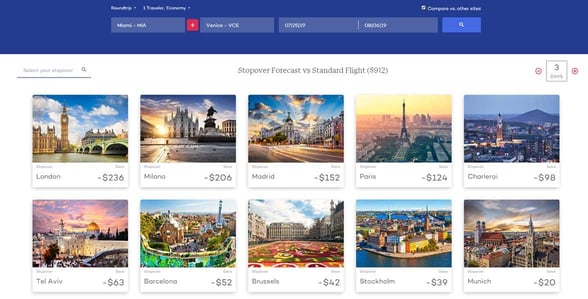 Booking a stopover flight from Airwander can provide travelers with a new city to explore.

What’s more impressive is that the site shows users the original price of the flight and compares it with how much money they can save by spending a day or two in another amazing city. For example, if a couple was planning a trip from London to Mumbai, India, they could save almost $100 if they made a stop in Dubai for a few days. Wandering around Barcelona on their way would save $12, while it would cost only an extra $4 to stopover for a holiday in Paris.

And, if travelers need a little inspiration, the Airwander blog provides plenty of ideas and informative articles on experiences around the world.

For those who aren’t sure where they want to go, they can input their origin airport and click “Let me go anywhere!” Airwander will generate a list of destinations and starting prices. Couples may be surprised at how affordable a trip around the world can be.

Airwander is on a Mission to Help People Make Memories

Adding a destination to a trip while saving money can inject a little more adventure to a journey, and Douglas said the stopover method of travel is perfect for anyone who wants to explore the unknown.

“I believe that travel has gotten to the point where you don’t have to do a lot of planning to get to a destination. It’s become so easy to book your accommodation on Airbnb, to grab a SIM card and get data and use Uber to get around,” he told us. “You can use travel blogs and use Google Maps and Google Trips when you’re there, so we think that it’s so easy to travel to a new destination. The benefits of having that stopover and reducing your cost are so great that there’s no reason not to.”

Ela and Douglas continue improving the site to make it easier to use for travelers planning their trips. The site is continually learning, as well, making it easier to find less expensive flights.

“It opens up the door because it’s not just about controlling your final destination once you get there,” Douglas said. “You get to control your flights and add destinations. It’s an exciting thing.”

“We believe travel gives a lot to the world because it allows people to see past the politics of their own country and judgments they may have,” he told us. “It breaks down the barriers and makes people more compassionate and understanding.”