The Scoop: Since 1999, Linden Lab has developed virtual reality software to inspire creativity, entertainment, and romance in both the virtual and physical space. In 2003, the team brought Second Life online, and it quickly gained a massive following. Today, tens of thousands of active members log into Second Life to connect with friends and love interests around the world, living out their fantasies in a safe virtual space.

American entrepreneur Philip Rosedale saw great potential in virtual reality in the mid-1990s, and he began dreaming of ways to put VR technology into every household. He founded Linden Lab in 1999 to develop VR hardware that would immerse people in a virtual experience. He worked alongside a team of engineers to create a prototype that was called The Rig.

The heavy steel contraption was designed to allow the wearer to interact with a virtual world with more than just their eyes. Once rigged up in the machine, perhaps users could hold a virtual object in their hands or manipulate the virtual space using specific body movements. That was the idea, anyway. The Rig never quite worked as a reality because the user was surrounded by screens and weighed down by various devices.

However, The Rig’s hardware inspired Linden Lab to build virtual reality software that sparked interest among people seeking an escape from the everyday. 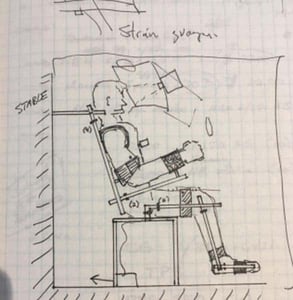 In the 1990s, Philip Rosedale sketched an idea for immersive virtual reality hardware called The Rig.

Over the next few years, Linden Lab shifted its focus to develop the virtual world that has become Second Life, one of the largest user-created virtual reality spaces on the web. This online community frees its members to be creative, be themselves, and try something new in a safe and controlled environment.

Since Second Life debuted in 2003, it has attracted tens of thousands of people from all over the world. Second Life can be downloaded and installed on any desktop computer, including Windows, Mac, and Linux platforms. Anyone over 13 can create an avatar and explore the virtual world. Only individuals over 18, however, have access to Second Life’s adult-friendly spaces where things can get a little steamy.

It’s not uncommon to have Second Life users flirting with one another via voice or text chat and making friends they would never have met otherwise. Linden Lab CEO Ebbe Altberg told us the Second Life community has led to countless online and offline relationships between imaginative individuals who are searching for a place to call their own.

“Funnily enough, we didn’t create Second Life specifically as a dating platform, but it has all the ingredients that make it possible to meet your soul mate — if that’s what you are looking for,” he said.

With headquarters in San Francisco, Linden Lab’s offices have the fun, startup vibe you’d expect from a tech company that builds and maintains virtual worlds. The company pairs technology with artistry, so it employs a diverse mix of tech whizzes and creative types.

The coders and engineers work side by side with artists, writers, and musicians to get every detail of the virtual world just right. Team members are encouraged to show appreciation for each other’s work by submitting a positive comment to The Love Machine, a peer-to-peer appreciation tool that rewards helpful and collaborative team members.

“Our company and its culture benefit from having people who are truly passionate about what they do,” Ebbe told us. “Linden Lab fosters a fun, collaborative work environment that truly rewards supportive teamwork.” 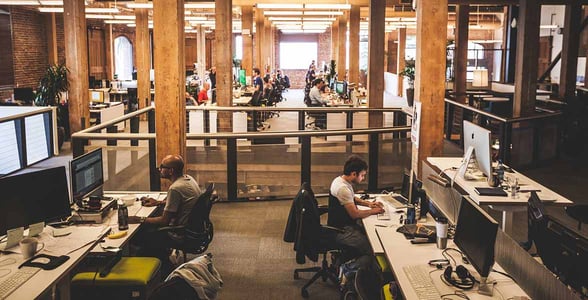 Linden Lab employs a tight-knit team of creatives and techies.

Linden Lab has been at the forefront of virtual reality experiences since 1999, and the team continues to push boundaries and develop new ways to bring people together.

In 2017, Linden Lab unveiled a new social virtual world platform called Sansar. Ebbe said Sansar is a beginners-friendly space where even someone who has never tried virtual reality should have no trouble navigating the world. Sansar emphasizes the social aspect of the virtual world, giving users an opportunity to travel to different places and meet new people from the comfort of their headsets.

“In Sansar, you really feel completely immersed in these 3D spaces in a way that feels like you are actually in that environment,” he said. “Imagine being transported to a futuristic sci-fi city of the future or a romantic hideaway — all without leaving the house.”

Sansar works on both PC computers and on VR headsets — including Oculus Rift and HTC Vive! — and it includes tons of alluring environments from mountain mazes to subterranean night clubs where anything could happen.

The Second Life Community Unites People Around the World

Second Life is a virtual world, but the relationships formed within it are very real. Thousands of 3D spaces exist to give visitors a thrill and introduce them to new people, places, and ideas. The Second Life community is full of adventurous individuals on a quest to find excitement and romance.

“The Second Life community is unlike any other,” Ebbe said. “The residents of Second Life truly inhabit this virtual world in ways that are both similar and very different than they might in the physical world.”

Many residents create their own virtual home or space where they can relax with friends or by themselves. Others choose to live in themed communities built around a shared interest or lifestyle.

Some virtual worlds encourage users to assume a persona, but Second Life’s culture is about being yourself — just in a different world. Many residents choose avatars that look similar to themselves or reflect their individuality in carefully considered ways. In a world where you can be anything, most SL members choose to be authentic. 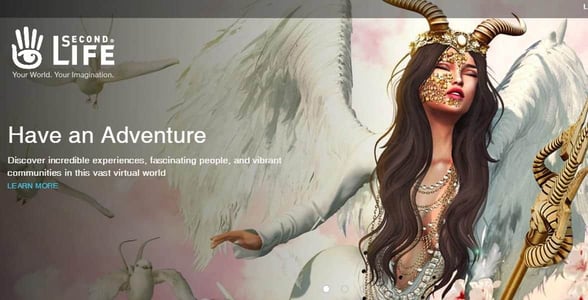 Second Life has a reputation as the largest user-created virtual space online.

“Second Life enables people to establish a really strong foundation in their relationship,” Ebbe said. “In Second Life, you really do get to know the essence and heart of a person in ways that might not be immediately apparent in the physical world.”

The Second Life platform fosters social connection and real-time creative collaboration. Individual members have the power to work together to make the virtual world into whatever they want it to be, and many friend groups enjoy sharing their creations, brainstorming new ideas, and taking on large projects together.

“This is a world created by our residents — so you can build and create or just explore and admire the works of others. And, of course, socialize within any of these spaces,” Ebbe said. “It’s very creative, and that’s what many people find attractive about the experience.”

Second Life gives individuals the freedom to express themselves and live out their fantasies, whatever they may be, and the virtual space has led to some unique experiences, and even love stories, online. 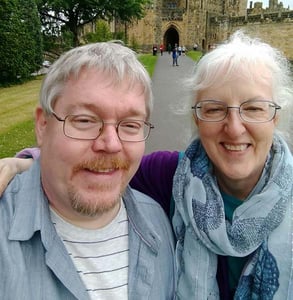 Pictured above, Teal and Wolf met on Second Life and formed a close relationship despite the age gap and distance between them.

A 70-year-old American woman under the username Teal fell for the wolfish good looks of a British user on Second Life, and their relationship soon became very real. Eventually, Teal closed her business, sold her house, and traveled across the Atlantic to be with her online love, who goes by the name Wolf. “Both of us enjoy each other’s company more than anyone we’ve ever met,” Teal said.

“I think virtual worlds have that ability to just let people see whether their souls match,” Wolf added.

This is just one of many touching love stories formed on Second Life.

Many other Second Life users have found a match on the platform and gotten into relationships that sometimes extend into the real world. The virtual world means so much to these couples that some choose to hold two wedding ceremonies — one IRL and one on Second Life where their global network of friends can attend.

“It’s pretty incredible to think that there are so many families that have been formed based on the connections made inside Second Life,” Ebbe said. “On our Facebook channel, we’ve had about 40 people share their wedding photos and, in some cases, images of their families. None of that would have happened had they not met in the virtual world.”

Of course, not everyone on Second Life is looking for a long-term relationship or pen pal. Some just want a discreet and safe place to flirt and have fun. Members can let go of their inhibitions and live out their fantasies in certain romantic and mature environments in the virtual world.

Over the years, Linden Lab has facilitated real-life connections by also organizing live events in collaboration with Smithsonian and Intel, Roddenberry Entertainment, Fnatic, OpTic Gaming, and professional comedians. These events capitalize on the community spirit that makes Second Life so popular among singles and couples worldwide.

The Rig didn’t make it into the real world, but it did give birth to the virtual reality phenomenon known as Second Life. Now the Linden Lab team seeks to expand its influence as a vibrant social network and online community. With the release of Sansar, Linden Lab offers users a chance to enrich their relationships and get to know people around the world. There’s no telling how many friendships and relationships will blossom as a result. 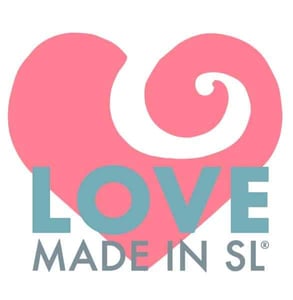 The Second Life virtual world has laid the groundwork for countless social connections and romances.

Second Life began as an entertaining what-if, and it has become a global community where people can pursue their passions and unleash their imaginations. The virtual reality space offers singles a doorway into a new world where they have the power to explore, build, connect, and maybe even fall in love.

“Second Life was not specifically conceptualized as a dating app, but it is certainly a social platform where you have the potential to connect with romantic interests,” Ebbe said. “We are always looking at ways to help connect people together who share the same interests and passions.”

Match vs. eharmony: Which is the Best Dating Site?