Editors’ Choice Award: Chicago’s Southport Grocery and Cafe is a Great Place for Local Food and a Low-Key Date

The Scoop: Chicago’s Southport Grocery and Cafe has become a popular date spot because it focuses on fresh food from local farms. The cafe, which serves breakfast and lunch, is committed to creating elevated comfort foods that appeal to a variety of diners, and couples can find the same products in the grocery section that they just enjoyed at the cafe. Thanks to its commitment to providing an artisanal experience that benefits local farmers, Southport Grocery and Cafe has earned our Editor’s Choice Award as a great place for a casual date.

Owner and Chef Lisa Santos wants Southport Grocery and Cafe to be a warm, welcoming place that becomes a part of her customers’ daily lives, and that desire is perfectly illustrated by a love story that blossomed at the cafe between a diner and a waiter.

A server waited on a mother and daughter, Lisa said, and after the meal, both women agreed that he had been especially nice. After they’d paid, the daughter returned and wrote down her phone number on a piece of butcher paper for the waiter. Soon after, he called, and the rest is history.

“Seven years later, they’re married with a baby,” Lisa said. “There are a lot of connections made here.” 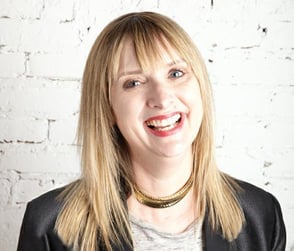 Owner and Chef Lisa Santos spoke with us about Southport Grocery and Cafe’s laid-back atmosphere.

The qualities that make Southport Grocery and Cafe the kind of place that inspires love also make it a low-pressure spot for a first date. The eatery’s bright, colorful space is inviting, and its casual atmosphere makes it a fun place to get to know someone.

“If you’re nervous about your date, the cafe is never going to be too quiet. There’s a lot of energy and a lot of people-watching, so it’s a good first step,” Lisa told us.

Lisa and her staff have even noticed one woman who brings a date to the cafe every other week or so. They’ve concluded that she tests out possible romantic connections at one of her favorite eateries. That’s exactly what Lisa wants: for the restaurant to become part of her customers’ routines.

“We’re often a tried-and-true place for one person in a relationship who wants to share it with another person,” Lisa said.

Serving Up Comfort Food With a Twist

A chef by training, Lisa created Southport Grocery and Cafe 16 years ago to share her culinary creations with others. Her goal was to open a place where people could meet up with friends or family and share a favorite dish.

“I like serving a great product and a great experience,” she said.

Over more than a decade, Southport Grocery and Cafe has become a popular spot to grab an elevated breakfast, brunch, or lunch. Most of the recipes on the cafe menu are made from scratch using products from local farmers.

That focus on homemade, local products makes it popular with many different groups in its location near Chicago’s famous Wrigley Field.

“Sometimes I’ll run down, and the whole place will be full of people in their 20s and 30s. Then I’ll come down again, and it will be all families with children,” Lisa said. 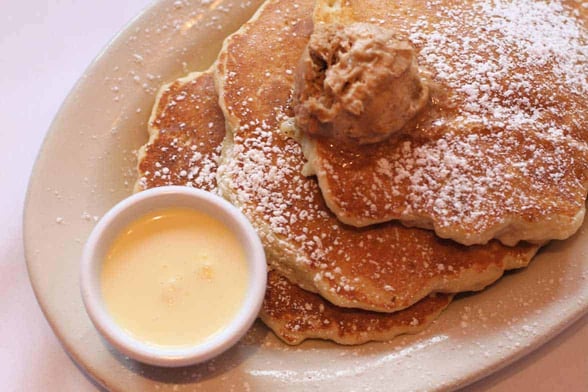 The bread pudding pancakes are one of Southport Grocery and Cafe’s most popular menu items.

Brunch at Southport is a smart first or second date idea because, according to Lisa, Chicagoans love this hybrid meal, especially on the weekends. At the cafe, diners can order brunch all day, instead of needing to make it in before the menu switches over. Lisa recommends the cafe’s signature bread pudding pancakes, with their unique texture and side of vanilla Anglaise sauce with cinnamon-sugar butter. Other standouts include the chicken and grits, made with chicken thighs, local grits, and eggs, and served with ancho-maple hot sauce.

Lisa describes the cafe’s fare as “comfort food with a twist.” Though the breakfast part of the menu is the most popular, the restaurant also serves salads and sandwiches for lunch, too. These aren’t your average lunch items, either. For example, the grilled cheese is made with taleggio and white cheddar cheeses on Tuscan bread with pickled green tomatoes, apples, and arugula.

Order To-Go Meals or Gift Baskets for That Special Someone

After your brunch date ends, couples can pick up the bread pudding pancake mix at the grocery store that’s right next to the cafe. They can also buy the same grits used to create the dish on the cafe’s breakfast menu. The grocery store is a continuation of the cafe, selling many of the same ingredients used in the restaurant.

The grocery is so committed to local producers that it employs a full-time preservationist who makes pickles, jams, drink starters, and more using local produce. Though the Midwestern growing season often ends in October, the cafe’s preserved foods help diners enjoy that produce throughout the year.

For example, diners can pick up canned dilly beans to use in Bloody Marys or chopped salads. Or they could purchase the same green tomato relish that they were served in the cafe to put onto homemade sandwiches. 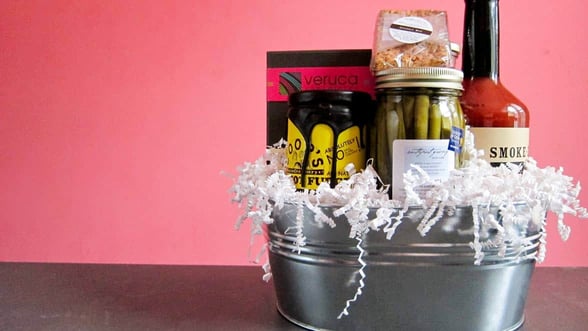 “We give a big voice to artisanal food products from around Chicago,” said Lisa.

Southport Grocery and Cafe is also known for its gift baskets. Some popular options include the Chicago Favorites basket, filled with products made by small producers in the city. Some of the offerings in the box include a smoked onion marmalade and a fruit preserve from Southport, Gary Poppins gourmet popcorn, Metric Coffee’s beans, and La-Dee-Dahs candy.

Lisa shared an example of one customer who wanted to order a gift basket for a friend who had just moved into the neighborhood. They wanted the basket filled with the local products, as well as with a gift card that would allow the new resident to continue shopping there.

Southport Grocery and Cafe: An Integral Part of the Wrigleyville Community

Part of the reason Southport Grocery and Cafe has built such a reputation as a date spot is because of its lively staff. Many of its workers have been there for years and contribute to the family atmosphere.

“There’s a real family feel because of that longevity,” Lisa said.

“I know now why there’s a line out the door on Saturdays and Sundays!” one reviewer noted. 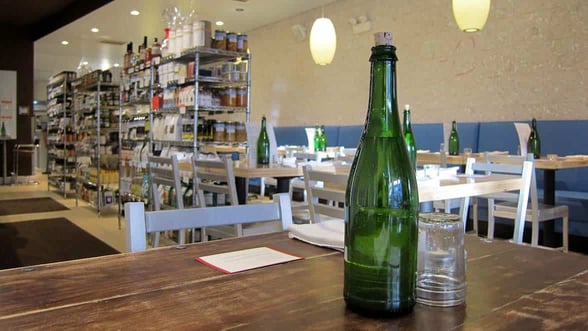 Southport Grocery and Cafe is a relaxed place for daters.

Another added: “I was looking for a casual but GOOD brunch spot. Southport Grocery and Cafe was right on the mark. We were big fans of the laid-back vibe and, of course, the food.”

As those reviews suggest, Southport Grocery and Cafe has become a part of the Chicago community. Lisa finds that connection to her community the most rewarding part of her 16 years operating the business.

“Being in the food business is a lot of manual labor, but, when you become part of their routine, part of the fabric of how they eat, that’s what really warms your heart,” she told us.