The Scoop: Ulele is a Tampa, Florida, restaurant that highlights the cooking styles of tribes indigenous to the area. Pronounced you-lay-lee, it’s named after the daughter of one of the chieftains from the region. Couples from Florida and beyond visit Ulele for an intimate, inspired culinary experience that includes fresh seafood and an in-house brewery. The team aims to make each dining experience memorable and unique, whether guests are celebrating anniversaries, birthdays, or just a romantic evening.

Though Florida is a well-known national supplier of produce and seafood, the state also has a rich culinary history that doesn’t get as much attention as its oranges or fresh fish. Richard Gonzmart, a restaurateur who owns several establishments in the Tampa area, including Columbia Restaurant, wanted to highlight his home state’s natural resources and traditional fare.

Local diners in the Tampa area had begun flocking to farm-to-table restaurants, which use locally sourced ingredients in their dishes and were popping up around the city. However, unlike many other regions around the country, the term “farm” in Tampa can also mean oysters, shrimp, sea scallops, pompano, snapper, alligator, and even wild boar.

“The connections were being made between local growers and restaurants, and Richard wanted to be a part of it,” said Jeff Houck, Marketing and Public Relationships Manager at Columbia Restaurant Group.

Richard wanted to go a step further, so he decided to focus on indigenous cuisine, specifically the foods that Native American tribes in the Tampa Bay area would have eaten.

From that vision, Ulele was born. The restaurant, named after the daughter of a Native-American chief from the Tampa Bay area, serves native-inspired meals with a modern twist. 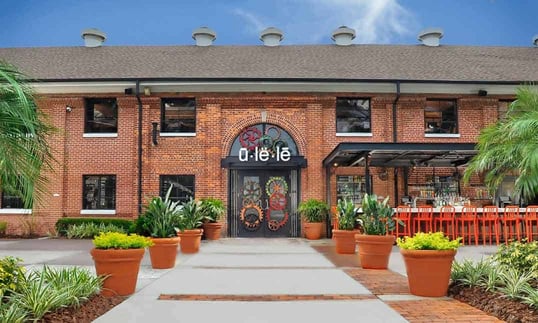 “He was particularly excited about using pork since it came to the U.S. through Tampa Bay,” Jeff said. “And we also have an abundance of seafood and shellfish.”

Couples can enjoy a romantic date night, and unique dining experience, at the restaurant, which is located on Tampa’s Riverwalk. A sculpture of Ulele — pronounced you-lay-lee — stands over a fire and welcomes guests into the restaurant.

It took years of commitment from Richard and his team to make Ulele a reality. They went well over budget to ensure everything matched his vision, but, in the end, the team created the restaurant they dreamed of.

When couples visit Ulele, it’s hard to remember that Tampa Heights, the restaurant’s neighborhood, once sat unused. Now, the district has been revitalized, and includes many other establishments that have followed Ulele’s lead.

“Ulele was a catalyst for the neighborhood,” Jeff said.

The restaurant is housed in the restored 1903 Tampa Heights Water Works building. Though the building has been renovated, many of the classic touches remain, including floor-to-ceiling windows and the red brick exterior. The table tops, bases, and front door were all created by local artists.

Richard also imbued the restaurant with an artistic flair. In addition to the sculpture of Ulele, the restaurant houses 1789 French stained glass acquired by Richard’s parents. A large horse sculpture also enhances the dining room decor. 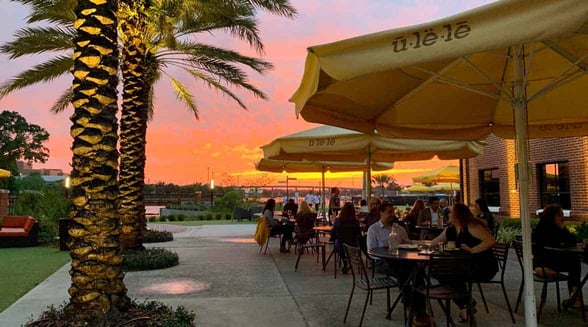 Jeff Houck, of the Columbia Restaurant Group, recommends watching the sunset at Ulele.

Another dramatic feature that makes an evening at Ulele special is its 10-foot barbacoa grill, a cooking method that mimics one that the Native Americans used.

“The kitchen is designed to replicate the fires that indigenous peoples cooked around,” Jeff said. “And guests see fire cooking their food.”

Perhaps the restaurant’s most notable visual features are its views of the palm trees, the river, and lagoon. Diners can enjoy those relaxing and memorable views whether they eat inside or outside.

Jeff also suggests that couples visit the restaurant when they can see sunsets from the west, as the restaurant is among the only ones in Tampa with a west-facing view.

“Ulele is the perfect place for a sunset dinner for two people who love each other, and the sunsets are so powerful coming in from the west,” he said.

The Unique Venue is Great for Celebrating Wedding Anniversaries and Birthdays

Ulele’s primary goal is to provide patrons with a dining experience that can’t be replicated elsewhere. Though that can be the case any night of the week, the restaurant is particularly committed to those who are celebrating special occasions.

“When someone comes for an anniversary or birthday, our staff all signs a birthday card for the person to thank them for coming,” Jeff said.

They’re also given a custom box with housemade truffles to commemorate the occasion.

Couples celebrating anything from first dates to wedding anniversaries can choose from Ulele’s many interesting appetizers and entrees. Some of these knockout appetizers include charbroiled oysters cooked in the half shell with butter, parmesan, and romano cheese.

“This is a place for people who don’t like oysters to try them again,” Jeff said. 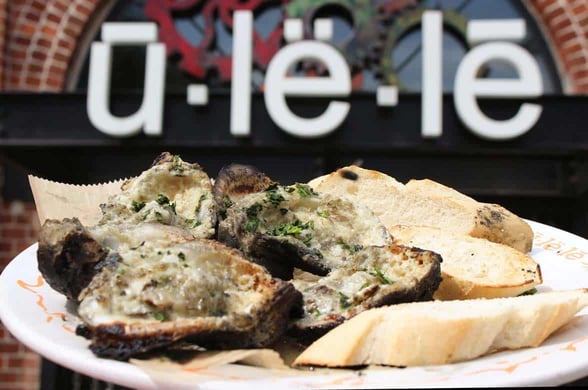 The charbroiled oysters are a popular appetizer.

Okra fries, which are cut into strips, dunked in the fryer, and finished with salt and lime, are another favorite menu item.

As for entrees, diners can choose meals that are either historically accurate or ones that incorporate modern techniques. Traditional meals include the Native Chili, made with alligator, wild boar, venison, duck, beef, beans, and spices. A more modern offering is the crab mac and cheese, with four kinds of cheese, beer sauce, a panko crust, and lump crab meat.

Diners can also celebrate occasions by adding a beer from the in-house brewery. The restaurant creates beers that are designed to pair with items on its menu. Some favorites include Buckhorn Stout and Magbee’s Honey Lager.

The Ulele team ensures that all these dining decisions coalesce into unforgettable evenings.

“It’s Florida at its finest. We’re just so pleased people have taken Ulele into their hearts to make special memories,” Jeff said.

Ulele lives up to Richard’s vision of a restaurant that celebrates the culinary history of Florida, and it has resonated with diners throughout the state and country. One reason for its widespread popularity is that Ulele provides a welcoming atmosphere and offers both casual and fine dining, making it a fitting choice for a weekly date night or a once-a-year occasion.

The restaurant finds this balance thanks to its dedicated staff, who are knowledgeable and attentive. Staff members enjoy working at the restaurant, where they can share an original dining experience with guests. 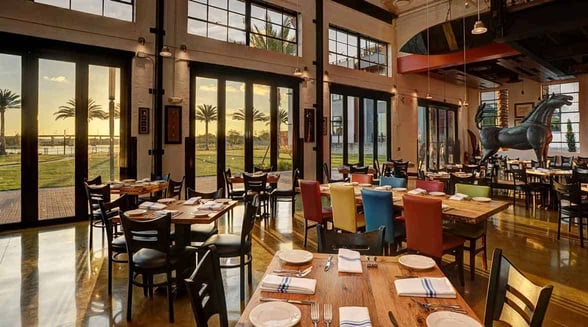 A vibrant and art-filled atmosphere awaits couples at Ulele.

Staff members also have in-depth knowledge of all of the restaurant’s food and beer offerings, so they can explain the menu items and make recommendations for pairings.

The passion that Jeff and the team feel for Ulele is palpable, and the restaurant’s high standards and unique concept keep them motivated to provide a sophisticated dining experience well into the future.

“We’re proud because Ulele celebrates the past, but it’s where local people take guests from out to town to show them what our food is becoming,” he told us.