The Scoop: Based in Australia, RedHotPie is an adult dating platform that has stood the test of time by delivering a variety of networking opportunities to its community members. The platform promotes a photo gallery, chat room, travel blog, events calendar, and other resources for networking and sex-seeking behavior. RedHotPie users range from single virgins to swinging couples, yet they all share a common desire to let go of their inhibitions and hook up with local hotties.

The early days of the internet were similar to the Wild West period in the United States. Everyday people had the opportunity to explore new frontiers and make their mark in an emerging part of the world. It was an exciting time when adventurers and visionaries flourished.

Most of the early settlers of the internet died off or moved on over the years, but some of the hardiest have stood their ground. An Australian brand called RedHotPie is one of the longest running platforms in the adult dating niche.

RedHotPie burst onto the online scene in 2002 as the what-if project of two tech entrepreneurs. Max McGuire and Mark Semaan saw the romantic possibilities of an online chat room and developed content to help swingers get to know one another and find an appropriate match.

The niche swingers platform exploded in popularity and eventually expanded to offer mobile dating resources to digital citizens of all backgrounds and sexual preferences.

RedHotPie currently represents one of the largest and most inclusive adult dating communities in Australia and abroad. The platform’s networking tools have inspired friendships, romances, and sexual encounters between people from all walks of life. It has even released a companion dating app for users looking for hookups while on the go.

Throughout its history, RedHotPie has adapted to changes in the online dating market by relying on the skills of its tech-savvy team. The developers can work fast to solve problems or add new features as needed, and their adaptability has been one of the platform’s greatest strengths. This adult dating ecosystem thrives on speed and spontaneity, so keeping it operating efficiently is no mean feat.

“RedHotPie has always been a David to the industry’s Goliaths,” said Mark Semaan. “We are continually out-performing and out-innovating much larger multinational operations.”

In the beginning, RedHotPie aimed to normalize polyamorous love and couples dating by allowing swingers to mingle freely. Its niche interest attracted a crowd of sexually curious and outgoing people, and that led to a growing demand to make room for other kinks and fetishes.

Over the years, this swingers lifestyle platform has expanded into a full-fledged adult dating community, complete with events, chat rooms, and matchmaking games.

RedHotPie has now opened its virtual doors to sex seekers of all stripes. It has straight users, gay users, bisexual users, and experimental or questioning users, and they all navigate the online dating waters at their own pace. The platform boasts having over 3 million member listings in 47 countries.

“The RedHotPie community is extremely diverse, but generally we find it to be a liberal, genuine and supportive one,” Mark told us. “We now attract singles, couples, thruples, groups and more; we believe in a ‘by the people for the people approach’, meaning there’s something for everyone on RedHotPie.”

Under the leadership of its original founders, RedHotPie has flourished and earned a trustworthy reputation within the industry. This is not a faceless company or corporate dating conglomerate. The team engages with the community and uses a wealth of technical knowledge to improve the experience of hunting for hookups and dates online.

The company headquarters are in Subiaco, which is the tech hub of Western Australia. It also has offices in the U.K. and the Netherlands.

The RedHotPie philosophy is rooted in sexual positivity and free sexual expression. Its community guidelines emphasize an acceptance of all kinks and preferences. This nonjudgmental space can offer a nice change of pace for people who are tired of playing coy and want to meet like-minded sex partners.

“RedHotPie has continued to be a leader in the market for almost 20 years, growing from strength to strength and successfully evolving with industry trends and technology,” Mark said.

RedHotPie is not a typical dating site or swiping app. It is a virtual hangout and niche community where people can explore event advertisements, review travel listings, chat in a public forum, as well as form one-on-one connections with members. The platform provides a variety of tools to stimulate interests and engage users in conversations about their likes and turn-ons.

Thousands of testimonials have poured in from people who had a good experience on the platform. Some of them even reported meeting a significant other or spouse in the adult forum. Whether it’s inspiring a friendship or a life-long love, the social network encourages individuals to be real with each other and see what happens.

“On RedHotPie, not only can you find your person, but you can also find your people,” Mark said. “We get feedback about RedHotPie weddings, RedHotPie social groups and events, really all manner of positive spin-offs from those initial RedHotPie connections.” 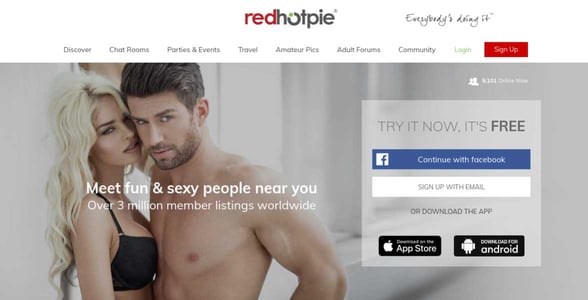 RedHotPie is a company that is always looking to grow and innovate. The team pays careful attention to user feedback and global dating trends to figure out the best way to serve the market. For example, as mobile technology became more mainstream, many community members clamored for a dating app to keep in touch with their sexy chats and matches from any smart device. A few years ago, the RedHotPie app answered this need.

The team has upgraded its desktop site to be more mobile-friendly while also launching a free RedHotPie app in the App Store. These developments have helped the platform stay competitive with modern swiping apps, and the company has reported record traffic numbers over the last two years.

The RedHotPie team is on a mission to maintain a world-class adult dating platform that gives users everything they need to make an instant connection and spice up their sex lives.

“Being open and supported means our members find better matches that result in better connections and better relationships,” Mark explained. “That approach — combined with our massive database and well-established infrastructure — has RedHotPie poised for its most successful chapter yet.”

RedHotPie Supports People in Search of a Wild Adventure

RedHotPie has been a pioneer in technology and sex positivity for nearly two decades. This small Australian company can trace its history back before Facebook, Twitter, Tinder, and many other corporate Goliaths in the social networking space. Its continued popularity is a testament to the effective and fun resources at the user’s disposal.

From the events list to the nude pics, RedHotPie has upgraded the typical online dating experience to foster more intimate connections between sexually liberal individuals, couples, and groups.

Anyone over 18 can join the RedHotPie network and see for themselves what it’s all about. The free registration process is quick and easy, and it gives people the space to bare their sexual desires without censure or embarrassment.

“RedHotPie is one of the few platforms anywhere in the world where you can be completely transparent and proactive in your search for quality matches,” Mark told us. “There’s no waiting or feeling out conversations to slip in your likes and dislikes. On RedHotPie, you’re encouraged to put it all out there.”