The Scoop: Happy Couple is a relationship-building app for couples seeking to understand each other on another level. The app poses thought-provoking questions to committed couples and reveals how aligned they are based on their answers. Couples can accurately assess their attitudes on communication, sex, recreation, responsibilities, and other emotionally weighty topics by asking and answering thousands of personal questions. From start to finish, Happy Couple is an informational resource and engaging tool for couples of all orientations and at any stage in the relationship. Over 70,000 people already use the app every month, and their conversations and successes have given the Happy Couple team insights into what makes a relationship successful.

I had two close friends in college, and the three of us had vastly different views on what we wanted from a relationship. One of my friends said she wanted to commit to someone who challenged her to be worthy of his devotion. She said you should feel as lucky to be with that person as he or she is to be with you.

I always said I wanted a partner who had my back — someone I could rely on in a crisis. If I’m stranded on the side of the road, he should be the first one I think to call.

Our other friend claimed the perfect partner is someone you look forward to seeing when you come home because spending time with him would turn any bad day into a good day.

All of these qualities are worth seeking in a relationship, but what are the traits of a real, lasting love? As starry-eyed college students, we could only make an educated guess and daydream about that ideal person. But some forward-thinking companies have endeavored to tackle this question more scientifically and nail down, once and for all, what makes a relationship truly great.

Happy Couple is a revolutionary app designed to gather information about relationships and help couples strengthen their bonds at the same time. The app offers a free quiz-style game that encourages couples to connect on a deeper level. The app is available for free on iTunes and Google Play.

A user named Kat Deans gave Happy Couple a five-star rating, saying, “Great way to better communicate and get to know small things about each other that might have never come up in natural conversation before.”

Learning to Love by Asking the Right Questions

Founder and CEO of Happy Couple Julien Robert said his mission is to understand and improve relationships on a fundamental level. This French entrepreneur and engineer met his match on a Tinder date, of all things. He had an instant rapport with Erin, a Google designer from San Francisco, and they became partners in life and in business.

The couple, who are now married, put their heads together in 2015 to launch Happy Couple, a one-of-a-kind relationship app. The idea was to prompt couples to examine their relationships, engage in important conversations, and keep the love and connection alive. They were then joined by Lonnie, a board-certified couple therapist and relationship expert to build the first models of interactions.

“It’s emotionally fulfilling work,” Julien said. “We’re taking care of users and developing ways Happy Couple can help them progress in their relationships. It’s not luck; it’s iterate, iterate, iterate, until you get it right.”

Today, tens of thousands of couples have contributed to the app’s question-and-answer format and helped anonymously inform its content for future users. 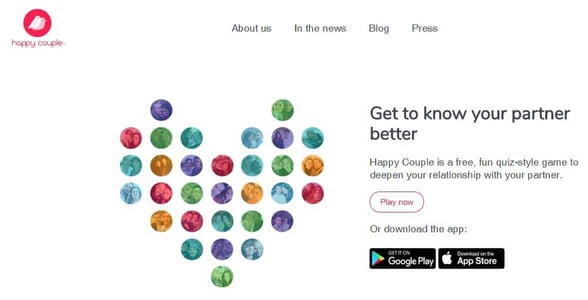 The Happy Couple app has sparked over 4.3 million conversations between couples.

Julien and Erin make a concerted effort to listen to what their users want and need, so they can make the app more effective and enjoyable with future updates. Recently, many users have begun asking for a way to engage in conversations with other couples on the app. Couples who have fruitful relationships want to share the secrets of their success, while couples struggling to connect want advice from people who have been in similar situations.

According to internal polling, 70% of Happy Couple users are interested in taking part in the app’s global community. One of the ways they can do so is by generating their own multi-choice questions and submitting them to the app’s growing list. It took the Founders three years to generate over 3,000 questions for Happy Couple, and it took the users less than a week to double that amount. Julien said Happy Couple users currently generate about 500 new questions each day.

“We’re trying to reinvent couples therapy,” he said. “Asking questions is the best way for couples to help us grow the app and give the right experience to our users.”

70,000 Individuals Stay Active on the App

Happy Couple has seen tremendous organic growth in the last three years. It has been downloaded by 750,000 users, about half of whom live in the US. A majority of the app’s users reside in countries with a significant English-speaking population, including France, Canada, the UK, and India. Around 5% of users identify as LGBT.

Couples can use Happy Couple to ask and answer many thought-provoking questions.

Julien said he’s proud of the diversity of his users and their enthusiasm for the app. Happy Couple sees over 70,000 active users per month and has facilitated over 4.3 million conversations. Some registered users log on every day or every week looking for insights into their relationships.

Couples on the app range in age, but millennials make up a bulk of the user base. These couples also vary in terms of how long they’ve been together — some have been dating for two weeks while others have been married 20 years. Happy Couple relationship-building tools help couples in all stages of their relationship.

According to the app’s internal stats, most couples on the app are in committed, long-term relationships. About a third of users describe themselves as being in long-distance relationships. Some are living together, some are raising kids, and some are still in the honeymoon phase, but they all share a common desire to understand their partners and improve their emotional connections to one another.

“We give users an authentic and safe environment to get to know each other better through dating quizzes,” Julien said. “It brings a new dimension to the relationship.”

Happy Couple has helped countless couples reconnect with one another by exploring each other’s similarities and differences. They can see how well their opinions align and try to anticipate each other’s attitudes in daily quizzes that build empathy and understanding one question at a time.

The Happy Couple team is a leading authority on healthy relationships.

Its educational setup has informed and enriched many couples in serious relationships. One person even got in touch with the team to ask if she could submit a very special question (Will you marry me?) on the app to surprise her partner.

“That was the first time we’ve gotten a request like that so it was really special for us,” Julien said. “We feel like we’re changing people’s lives, which is why we started Happy Couple in the first place.”

“It’s really about focusing on the product and making sure we provide a safe, romantic place for users,” he said. “Giving users the opportunity to ask each other original, authentic questions has added a new dimension to the app.”

Happy Couple Listens to Its Users

Everyone approaches relationships from a slightly different perspective. There isn’t a universally accepted guideline for how to build strong romantic connections and attract a balanced, loving, and long-lasting partnership — but Happy Couple is on its way to establishing itself as a go-to authority on what couples want and need from their relationships. This app puts relationship knowledge at your fingertips.

By asking the right questions, Happy Couple has generated insightful answers to relationship quandaries and helped couples better understand one another. Looking to the future, Julien said he expects this groundbreaking app to continue growing its membership base and knowledgebase so it can positively influence couples around the world.

“We’re trying to educate couples as early as possible,” he said. “We detect their struggles and propose easy and fun solutions.”