The Scoop: Some singles have particular standards or sensibilities in mind when seeking a partner, and niche dating sites, like SuperTova.com, allow them to be clear about what they want and pursue partners who want the same thing. SuperTova is a free dating site for Jewish singles who want to marry someone who shares their culture and religion. Justin Corsa founded the dating site as a free networking resource, and it has grown to include over 50,000 members in just a few years. Today, Justin hopes to build on that growth by asking members to donate, not subscribe, and support his efforts to keep Jewish traditions and culture alive.

Justin Corsa recalls having had a good experience on a particular Jewish dating site while living in New York City. But, when he signed up in a less populous area in North Carolina, he found the experience fell short of his expectations. He was disappointed to find many of the date options he’d seen as a free member turned out to be fake or inactive profiles.

Justin had paid a subscription on faith, thinking it would help him connect with Jewish women in the area, but he soon discovered the dating platform was more interested in taking his money than helping him find love.

Justin knew he wasn’t the only single Jew looking for a bashert and frustrated by online dating, so he decided to create a free dating site specifically for Jewish singles interested in falling in love and getting married. Today, SuperTova has more than 30,000 active users in dozens of countries throughout the world.

SuperTova’s name comes from the Hebrew word for “good deed,” and that just about sums up Justin’s motivation for creating the online dating community. He’s doing a good deed.

By giving Jewish singles a trustworthy, effective, and free dating resource, Justin aims to bring like-minded people together and increase the number of Jewish marriages in the world.

The website offers a targeted and transparent dating environment where Jewish singles can mingle freely and date within the faith. Taken as a whole, SuperTova strengthens and prolongs Jewish traditions by connecting members of the community.

“I want to create a very simple platform for dating, meeting, and marriage within a niche group of people,” he said. “My mission is to improve the probability of Jewish marriage within a fun, creative environment.”

Justin developed SuperTova with the needs of the Jewish community in mind. He has worked hard to preserve the integrity of the dating site and offer a highly effective and affordable dating solution for marriage-minded men and women who share similar values, culture, and background. One of his central tenets is that such singles shouldn’t have to pay for the opportunity to meet one another. He therefore doesn’t have any subscription plans or paid features on the site.

SuperTova has always been a free dating site, and Justin plans on keeping it that way. However, he has to generate revenue somehow, and so he’s had to get creative to cover the site’s operation costs and keep the lights on, so to speak.

“I have to keep the site competitive with paid sites,” he said, “while I continue to proceed with no member fees ever.”

Fortunately, Justin recently came up with a way to bring in some extra cash and still keep his site free for all. He has added a Donate button at the top of SuperTova’s homepage to encourage members to contribute what they can, if they can.

SuperTova seeks to generate additional revenue through donations from its members.

The Donate button will allow Justin to crowdfund his dating site. Over the years, he has invested a lot of his time, energy, and finances into strengthening the Jewish community, and now he has given the community a chance to return the favor and help him help them.

The option to donate is just that — an option. Members are, of course, under no obligation to give to the dating site. They can continue to use it for free for as long as they want to. Justin said he has already seen a few donations come in, even though he has yet to tell his followers about the Donate button or encourage them to use it. He plans to mention it in his next newsletter to SuperTova members.

“This will obviously be voluntary,” he said. “Those members who can afford to throw in a few dollars, we encourage them to help out; if someone cannot help out, no worries. They can still use the site, and access all functionality.”

Many Exciting, Community-Oriented Plans in the Works

SuperTova adds new members every day. Justin said he’s happy with the dating site’s steady organic growth and hopes to continue supporting the love stories of so many Jewish singles for years to come.

Word-of-mouth is primarily responsible for the dating site’s continued success because Justin hasn’t put any money into ads in five years. That could soon change, though, if all goes according to plan. He said he plans on using member’s donations to first pay the server’s costs and then look into marketing and advertising SuperTova.

“This could be lethal relative to our subscription competitor,” he said. “We’ve made it this far without a $0.00 marketing/advertising budget; I’m curious to see what happens when there is an actual marketing budget.” 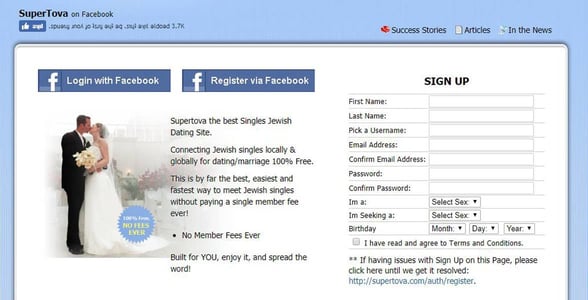 SuperTova upholds Jewish values and culture in a safe, friendly, and authentic environment.

In the coming months, SuperTova members can also expect to see more newsletters and notifications to keep them informed and connected to the community. Justin said he wants to engage with the people signed up and ensure they find the relationship they’re looking for.

Even while he develops savvy marketing tactics and user-friendly tools, Justin remains focused on the central purpose of the dating site — which is simply to connect Jewish singles. He’s not in the dating industry to make money; he’s in it to change lives for the better.

“Many people have been married via SuperTova,” he said. “Jewish children have been born, and Jewish families are developing. When I think about it, it makes me smile.”

Years ago, Justin wasn’t satisfied with the online dating tools available to marriage-minded Jewish singles. So he built something better. He established SuperTova as an always-free, community-oriented, and values-driven dating site, and today that community includes over 50,000 members — 30,000 of whom are active on the site.

SuperTova’s growth can only be good news for the Jewish community as the niche site leads to more dates, relationships, and marriages within the faith. Its free tools give Jewish singles the opportunity to connect with one another and preserve Jewish culture for generations to come.

Justin has worked long hours, including weekends, on this passion project, and he has high hopes for its future. By devising ways to bring in more money, he has set SuperTova on track to grow its member base, expand its reach, and compete with some of the biggest names in the Jewish dating niche.

“I’m very satisfied with the efforts I put forth,” he told us. “The mission continues, and we will see continued growth and expansion. Let’s see how far we can go!”