The Scoop: Since its launch in 2007, SaucyDates has been a friendly wingman for singles who want to flirt and fool around in the local dating scene. This adult dating site has a reputation for introducing genuine people and facilitating real dates that lead to sultry conversations and intimate encounters. Privacy and discretion is a top priority for the SaucyDates team, and its user-friendly and responsive features have sped up the dating process and made a difference in many people’s love lives.

Surfing on a hookup site or app can be nerve-wracking because you never quite know who’s on the other side of that dating profile. It could be the dream date the bio and picture describe, or it could be a catfisher, bot, or scammer hoping to deceive online users. 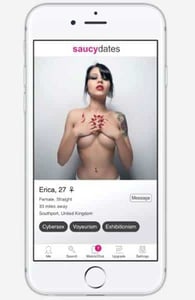 Many singles have encountered people who aren’t what they seem on dating sites and apps. An online survey found that 43% of male and 28% of female respondents have been catfished by someone they met online, and 13% of catfishing victims said they sent over $1,000 to their supposed love interest.

It can be difficult to build trust with someone who’s hiding behind a dating profile, and that’s why it helps to have a reputable dating site and app to back you throughout the dating process.

SaucyDates.com has proven itself to be an ally to daters who want to make a match and hook up with someone who’s the real deal. This independently owned dating site began as the passion project of David Minns, a mechanical engineer and expert coder. He built SaucyDates from the ground up and expanded its adult dating network from the U.K. to the U.S. and beyond.

Today, SaucyDates has served over 1 million members around the world, and it has pioneered security measures that are among the best in the field.

SaucyDates is the go-to site for genuine folks seeking hot dates and sexually explicit content, and you don’t have to worry about running into fakes here.

The team promises, “No swiping, no games, no delays. If you’re attracted to someone, then hit the message button. There are no barriers.”

A Secure Meeting Ground for People of All Backgrounds

SaucyDates promotes a sex-positive and above-board dating scene for adults who want to skip the small talk and get to the good stuff.

The site welcomes men, women, and transgender daters in a nonjudgmental atmosphere, and it provides highly efficient search and matching tools to help them get something going and land hot dates any time of the day or night.

As an adult dating site, SaucyDates allows users to post risque, dirty, naughty, revealing, and naked photos of themselves, and they can even hide or blur their faces in the photo if they wish to maintain their anonymity. The only major rule is that your profile picture has to be of you — any photos that fail to meet this requirement will be removed from SaucyDates.

Password security is another area where SaucyDates earns top marks. “It’s totally encrypted,” David assured us. “It’d take about 300 years for anyone to decrypt a password.” 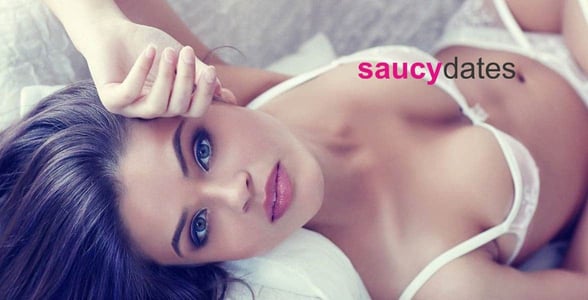 SaucyDates has created privacy features that allow singles to anonymously browse the site.

Security is important to the SaucyDates team because singles need to feel safe and comfortable if they’re going to put their hearts on the line.

“I’ve done everything to the best of my ability to keep things very safe for members,” David said. “Behind the scenes, every piece of data has a natural expiry date, so you don’t have data sitting there for 10 years.”

The SaucyDates site regularly deletes old chats and inactive profiles, so singles don’t have to worry about losing control over their data.

When the E.U. passed the General Data Protection and Regulation in 2016, the SaucyDates team had to act quickly to make sure it was playing by the rules and offering top-notch privacy features to its customers.

SaucyDates doesn’t collect sensitive information or personal details from users. It will never ask for salaries, job titles, or your exact location. You don’t even have to provide your real name. The SaucyDates site lets users choose a first name from a list of the most popular first names in the world — and that’s a good opportunity to take on a sexy alter ego.

When creating a SaucyDates profile, you’ll be asked to disclose your age, not your birthdate, and the site will use your device’s GPS data to estimate your location within about five miles. The only piece of personal data required by SaucyDates is an email address, but users can always create a secondary email account to make sure their SaucyDates account isn’t tied to their offline identity in any way.

SaucyDates is a fast-moving and fast-working dating platform that has just gotten a mobile upgrade. The team recently released a new dating app to complement its award-winning dating site. The app includes all the same features as the site — just with a more mobile-friendly interface.

The SaucyDates app is currently available for free in the App Store, and David said he plans to release an app for Android users within the coming year.

So far, the SaucyDates app has earned a 4.4-star rating from users, and it is active in the U.K., the U.S., Canada, Australia, South Africa, New Zealand, Ireland, India, and Europe.

Throughout the years, David has relied on user feedback to direct his future projects, developments, and upgrades to the SaucyDates network. Mobile usage on SaucyDates has been steadily increasing over the last few years, so David decided to make it even more accessible and mobile-friendly to everyone. 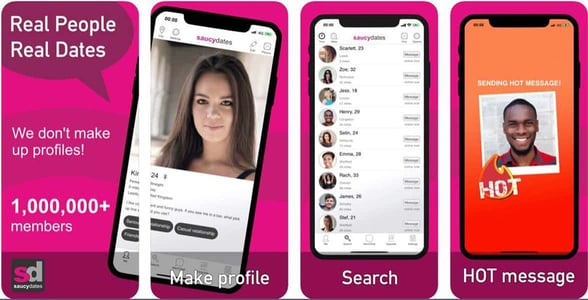 The SaucyDates team keeps the users in mind and codes like someone’s love life depends on it.

David said one of the benefits of being an independent dating company is that he can quickly make changes to the base code and implement site-wide improvements within a short period of time.

“It’s making a difference,” he said. “It’s hard to see when you’re at your computer coding away, but I’ve gotten feedback that it is working and changing people’s lives. So that’s been wonderful.”

SaucyDates’ unprecedented success as an independent company has gotten the attention of many media outlets and reviews sites, and it has even won awards in the industry. The SaucyDates team is proud to have been an iDate finalist in 2013, 2014, 2015, and 2016.

SaucyDates is a quality-driven dating site where you don’t have to dodge a horde of fakes and scammers to find casual sex. The site’s intriguing atmosphere and beguiling profiles have won over thousands of daters around the world.

Today, SaucyDates is one of the top-recommended adult dating sites for singles in a hurry to meet someone special, and it also has a fully functional dating app so you can take this singles network with you on the go.

SaucyDates has distinguished itself from its competitors by maintaining a transparent, friendly, and effective dating service that only highlights authentic and active profiles created by real people.