Matchmakers In The City™: The Conti Sisters and Their Team of Matchmakers are Committed to Helping Clients Find Long-Term Romance

The Scoop: Matchmakers In The City is flipping the script to help big-city singles find love. The service — founded by sisters Alessandra Conti and Cristina Conti Pineda — teaches clients in Los Angeles, New York City, San Francisco, and Washington D.C., how to develop real connections in a dating landscape saturated with apps. Matchmakers In The City believes reliance on technology — and the perfect glow of social media — can make it difficult for singles to establish lasting relationships. The team even works with other agencies to pair clients with compatible matches in other cities.

Legendary “Millionaire Matchmaker” Patti Stanger has high praise for the Beverly Hills-based Matchmakers In The City. She calls the young co-founders  — sisters Cristina Conti Pineda and her sister Alessandra Conti — the “new generation of matchmakers.”

Patti’s endorsement rings true, as the Conti sisters are developing a unique brand of matchmaking services for their clients. The practice includes one-on-one meetings, but the sisters also share their insights through podcasting, blogging, and TV appearances. Alessandra was even chosen as the matchmaker for seasons seven and eight of MTV’s romance-oriented reality show “Are You the One?” 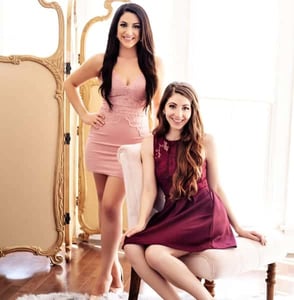 “She interviewed and helped to choose all the matches for the show; 2018 has been a year of immense growth,” Cristina said.

The team of matchmakers offer their services to singles in Los Angeles, New York, San Francisco, and Washington D.C., but even those who don’t live in these cities can receive advice through their online content. Their podcast, Dating in the City, is updated monthly and answers questions, including “What does it mean if someone is on social media too much?” and “Are astrological matches useful?” The sisters’ blog is also filled with down-to-earth tips.

Matchmakers In The City has seen monumental success since the sisters combined their matchmaking talent, entrepreneurial spirit, and business know-how to launch it in 2011, and they now have a team of matchmakers in Los Angeles, New York, San Francisco, and Washington D.C., who are working with individual clients across the country — and a few throughout the world.

Cristina attributes the business’ success to the sisters doing things the right way.

“When you’re doing something well, people take notice, and it snowballs,” she said. “That’s why a matchmaking company is not something you can build overnight. It takes many years of trust, hiring the right people, and having the right company culture.”

Many of Matchmakers In The City’s clients are recovering dating app users. For many unsuccessful daters, apps can seem like a godsend because they’re convenient and hold the promise that compatibility can be just a click away. However, dating apps can force users to put in a lot of time and energy, and they often don’t see any results, Cristina said.

“There’s a backlash from dating online. People think it will be a quick fix to meet people, but it poses many other problems they’re not expecting,” she said.

“I think that now, more than ever, people are getting fed up with the apps and online dating. They crave a more authentic and genuine connection, which is why I believe matchmaking has been such a popular option in the past few years,” Alessandra added.

For example, some unhappy dating app users find matches who are only interested in hookups, not in real relationships. Others may be lying about their identities or where they live.

In contrast, Matchmakers In The City takes away that uncertainty about a person’s truthfulness. The team thoroughly reviews clients, chooses matches, and receives peer reviews about the matches they’ve created from other matchmakers on staff.

“We provide background checks for all our clients, so we know they’re being truthful about where they live and work. You don’t get that on an app or online,” Cristina said.

Further, they try to ensure that matches in the service’s database are authentically seeking relationships.

“Everyone has to be looking for love. They have to be ready to meet the right person for their lives,” Cristina said. “We’re so much above the fray, which is why clients value us.”

This kind of personalized service helps differentiate Matchmakers In The City from the crowded dating app industry by providing security and confidence. With a matchmaker’s help, clients don’t have to worry about being ghosted or used; instead, they can focus on what matters: compatibility and long-term possibilities.

While the oversaturation of dating apps has discouraged daters, so has the spread of social media-perfect photos. Though most people know there are tools to make men and women look better online than they do in real life, this phenomenon can mean that women aspire to look like these images and men seek impossibly beautiful women.

“They’re looking at Instagram photos and saying, ‘That’s what I want.’ Apps that make people look perfect are contributing to singles being less willing to connect with real people,” Cristina said.

Matchmakers In The City offers personalized coaching that encourages daters to be realistic about their expectations. One of these coaches’ most difficult tasks is ensuring clients recognize looks are not the most important part of a relationship.

The Matchmakers In The City team of matchmakers helps singles move past appearance and focus on compatibility.

“It takes time to unwind from physical perfection because singles see it everywhere,” Cristina said. “We like our clients to go through social media cleanses because it can be problematic, especially for men. It can make them antisocial and unable to have a real relationship.”

After the matchmakers coach their clients on being realistic about their expectations of another person’s appearance, they encourage clients to choose the five inner qualities they want in a long-term partner or spouse. They don’t ask clients to change themselves or their values, just to be realistic about whether their needs are even achievable.

“The matchmakers get to know our bachelors and bachelorettes and bring them back to reality,” Cristina said. “We don’t ask them to compromise on the five inner qualities they’re looking for in their future spouse. Qualities like trustworthiness and reliability are so important in future husbands and wives.”

Since Matchmakers In The City was founded in 2011, it has developed a reputation for creating high-quality matches. The combination of its careful policies, client-centered focus, and commitment to authenticity have led to many successful relationships, engagements, and marriages.

“It’s really an art to be a matchmaker. Reliability is important, and a lot of companies fail because they can’t provide that kind of consistency. People see our results, and that’s why our business has grown,” Cristina said.

Another uncommon aspect of Matchmakers In The City is that it doesn’t compete with other services. While the company is always looking to expand its clientele, the company recognizes that it can’t make matches for everyone. Instead, it works with other agencies to provide quality referrals.

“It’s all about creating a beautiful relationship that will change the world in beautiful ways.” — Cristina Conti Pineda, Co-Founder of Matchmakers In The City

“A big part of our job is revolutionizing the dating agency by changing the policies we have in place in our company,” said Cristina. “ We want to help as many people as possible, but we can’t help the entire population of singles.”

“It’s been seven years of bringing people who would have never met together, helping them become the best versions of themselves through working with our experts and matchmakers, and being a support system for them through the trials and tribulations of dating,” Alessandra said. “It is one of the most rewarding jobs in the world, and we have been honored to work with thousands of men and women who have trusted us with such an important element of their lives.”

Cristina developed this interest in helping many people find love because she herself found a happy marriage — through an introduction from her sister. Both Cristina and her sister think of their profession as more than a job, but rather a passion to help people find happy relationships. And while a real relationship may not be as perfect as depicted on social media, it can help both partners find fulfillment in themselves and their pairings.

These positive, loving unions help more than just the people in them, according to Matchmakers In The City. The Conti sisters said they believe healthy relationships have a significant impact on society.

“It’s all about creating a beautiful relationship that will change the world in beautiful ways,” Cristina said.