The Scoop: As more singles gravitate toward online dating sites and mobile dating apps, the process of proving their identity — or someone else’s — becomes more challenging. People around the world still rely on physical documents, including driver’s licenses and passports, to prove who they are, but Yoti allows them to authenticate their identity through digital IDs on their phones. The process involves converting physical IDs into a digital ID that users can easily share with other individuals or businesses. Yoti fosters a safer online experience for everyone — particularly online daters.

India has a significant problem with catfishing, which is when someone posts a fake or misleading profile on social media platforms or dating sites to deceive other people. So one dating site aimed at Indian singles, TrulyMadly, decided to start verifying the identities of its users to eliminate catfishing, the results of which can range from mild annoyance to potentially dangerous situations.

Each TrulyMadly profile has a trust score based on the willingness of the user to share and verify their personal details. These details range from their facebook or linkedin profile to ID documents such as passport or Aadhaar (India’s National ID document). TrulyMadly is working with Yoti, a UK-based digital identity company, to verify the government issued documents. This benefits the individuals as the higher a user’s trust score, the more matches he or she is likely to receive.

“If you can see that someone has a verified profile, it gives you peace of mind. It promotes safer online dating and helps people feel confident meeting face-to-face,” said Leanne Marshall, Yoti Chief Marketing Officer.

The company has worked with many dating sites and apps throughout the US, the UK, and India, such as DateID, to develop similar identity verification features. Yoti even made a commercial highlighting the problem of inauthentic information online (which has been viewed over 34 million times).

In a video titled “Little Casanova,” a young boy creates a fake profile on a dating site. He adds pictures of an adult man, and then meets several women for dates.

On one date, a woman holds up the fake profile and exclaims, “It says you’re 29 on here.”

The boy replies, “Everyone lies on those things, don’t they?”

While the video is funny and cute, it shows the necessity of better identification verification for dating sites and apps, and meeting up with someone who isn’t who they say they are is more than aggravating — it can be a serious safety issue.

Many companies haven’t kept up with digital ID verification, so they find themselves behind the curve in wanting to start verifying user identities, including ages, locations, and other factors.

Yoti helps companies — and individuals — accomplish that by ensuring users are authentic and providing peace of mind.

Yoti was founded in response to an urgent need for digital identification. Many tasks that were once accomplished in person, from banking to renewing a driver’s license, are now accomplished online. While almost everything else has been digitized, identity systems have remained in physical form.

“To prove who you are, you still have to use paper documents, while everything else is moving online. You use your phone to speak to people, look at maps, and photos, so it’s a natural step to use your phone to prove your identity,” Leanne said.

The first step in creating a digital ID through Yoti is passing a liveness test. When users download the Yoti app, they record a video of themselves saying a series of randomly-generated words. Next, they take photos of their government-issued ID.

Users first pass a liveness test before they are allowed to begin using Yoti.

From there, a combination of NIST approved biometric technology and trained ‘super recognizers’ in a clean room verifies each profile. They first look up the ID in a government database to ensure that it’s real, checking for holograms, fonts, and other specific details. And Yoti IDs include age verification; if the process thinks a user looks younger than the age on the ID, it raises a red flag.

Once they authenticate an ID, the Yoti staff determines if the recorded video matches the person on the ID.

“We’re building a verified network of people and businesses, which means that you can trust that people are who they say they are,” said Leanne.

Once all aspects are authenticated, users have a Yoti account. And they can unlock and share it using biometric data like a thumbprint or facial scan — depending on their mobile device.

Share Personal Details If and When You Want to

Once it issues a digital ID, the Yoti team no longer has access to a user’s data. That’s a significant feature of the service — no one besides the user has access to that data. Users are the only ones who can decide if they want to share some or all of their identifying information with others. 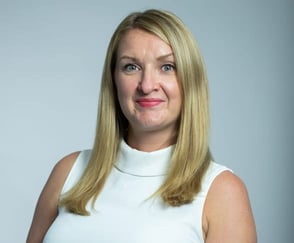 Yoti Chief Marketing Officer Leanne Marshall spoke with us about how the platform is modernizing identification.

For example, if someone wanted to enter a website that restricts users by age, he or she could use Yoti to gain access.

Users can also check the Yoti digital IDs of others to determine if they are presenting themselves truthfully. If the digital ID checks out, they can more confidently do business with that person or strike up a chat on a dating platform.

With so many data breaches in recent years, it’s clear that most people want to have more control over their personal information. Yoti provides that security with its cryptographic sharing features. And no one on the other end can access private user information because it is encoded.

That means Yoti can help keep people safe from both data breaches and online crime — including fraud and identity theft.

“The bottom line is that Yoti keeps your personal details private,” said Leanne.

The Yoti team believes that the shift to digital IDs will accomplish much more than just alleviating small hassles like pulling out your driver’s license when buying alcohol. They believe technology will make people safer in all aspects of their online lives.

Yoti is a certified B Corps, meaning it’s a company that strives to make business decisions based on good governance.

“We have a clear ethical framework and an external Guardian Council,” Leanne said.

Yoti wants to flip big data on its head. While companies have become increasingly interested in collecting and sharing data about their clients, Yoti wants to give control of that data back to the people.

“Knowing who you’re dealing with brings trust and security to everyone,” Leanne told us.

Next up for Yoti is revolutionizing the self-checkout process at the grocery store. While many stores allow shoppers to pay for goods without waiting in line for a checker, they still need to present their ID to a real person if they buy alcohol or cigarettes.

“Soon, you’ll be able to breeze through the self-checkout without waiting for anyone to look at physical documents,” Leanne said.