The Scoop: Weekend Dating makes the process of meeting interesting, attractive singles easier, even during the age of social distancing. When in-person speed dating events came to a temporary halt in 2020, the team behind Weekend Dating shifted to virtual speed dating, organized walking dates, and online social events for singles and couples. That hybrid dating model is highly popular and has been successful in helping people find love.

Speed dating started gaining popularity back in the late 1990s, and it involves many singles showing up to a venue and having a series of short conversations with potential partners. The singles take seats across from each other as they talk, and when the buzzer sounds, they say goodbye and move to the next seat.

It has been a popular way for singles to meet for decades, but during the COVID-19 pandemic, the concept needed some updating. Weekend Dating, an in-person speed dating business that operates in the New York metro area, suddenly had to stop holding events when the city went into lockdown.

That’s why Weekend Dating Founder Jay Rosensweig said he decided to modernize it.

“When the pandemic hit, my business went to zero,” he said. “I was days away from unemployment when I said, ‘I can figure this out.’”

The answer wasn’t another dating app or a traditional site where people create profiles and search for matches. Instead, Jay said he decided to take the entire idea of speed dating online and create a series of organized events for both singles and couples. Thanks to his quick thinking, Weekend Dating is now stronger than ever.

“The pandemic forced me to get creative and adapt, and go back to the way it was when I started in 2003,” he said. “I didn’t sleep more than two or three hours for about three weeks until I got things back under control.”

Weekend Dating isn’t a dating service. Instead, it organizes fun events that people can pay to join whenever they want. Before the pandemic, it offered speed dating events in Long Island and throughout New York. Now, many events are virtual and available to anyone in the U.S.

“The pandemic forced us to give other ideas a shot, and they went well,” Jay said. “Clients still want personal service and want to see a face behind the company.”

Online speed dating events are organized by age, with a specific number of seats available for men and women. Some are designed specifically for the Jewish community or Catholic community, while others remind participants that love is blind by requiring the cameras to stay off until the end. 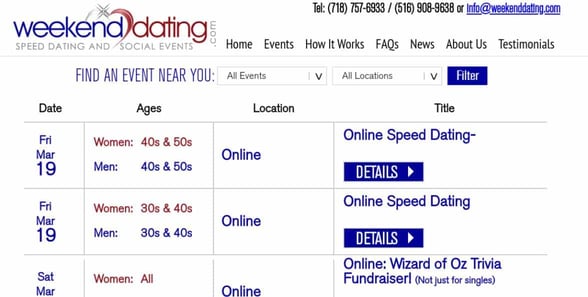 Weekend Dating is well-known for its speed dating gatherings, which it hopes to start back soon.

During the warmer months, Jay also organized in-person walking dates that complied with health and safety protocols by being held outside in parks. He said, at first, he wasn’t sure the concept would work, but the walks ended up being extremely popular.

Jay also received feedback from people who had found partners through his speed dating events and wanted to continue enjoying social activities. That’s when he expanded to organizing virtual events that weren’t just for singles.

“As clients met and could no longer come to the singles events, they were still looking for something to do,” Jay said. “A bunch of years back, I created a separate division for fun social events that anyone could attend. These were themed trivia events, speed friending, shows, walking tours, and more.”

Today, all of the events are listed on the Weekend Dating homepage.

Jay said he wants to offer something for just about anyone who wants to meet new people and have fun — especially when so many people are stuck at home. Broadway shows and sporting events may be on hold, but people can participate in plenty of other events for participants.

Weekend Dating holds the events in virtual rooms, which can be accessed through a computer and webcam or using a smartphone or tablet. Prizes range from Amazon gift cards to free entry to future events.

Singles and couples can participate in many of Weekend Dating’s virtual events.

Of course, the main focus remains on helping singles enjoy dating. Virtual speed dating events can make it easier for people to meet others they wouldn’t otherwise.

“As far as the dating events go, people can still meet others within driving distance, but perhaps a little further away than if it was an in-person event,” Jay said.

Jay said he prioritizes honesty and transparency with participants, who may have found that other companies aren’t clear about age groups or refund policies. And singles who join virtual speed dating events will know their matches within hours.

If one person expresses an interest, but the other didn’t, they’ll still know. That allows participants to change their minds.

Weekend Dating events are responsible for 80 marriages and 15 children resulting from the new families. Those stories are the ultimate motivation for Jay to continue his work connecting singles.

“I want to continue to give people the option to meet, date, and hopefully find the one and have them name their baby Jay,” he joked. “I want to contribute towards changing people’s lives.”

Even when in-person events return to the New York area, Jay said he plans to continue hosting virtual events nationwide. He said many participants have told him virtual events are more convenient and fun.

The game night events, which are open to couples, are a time for fun and reflection for Jay. For example, in late 2019, he organized a Survey Says event at the Stamford Marriott with special guests Mike and Marilyn. They had met at one of Jay’s speed dating events back in 2017, and they were married in September 2019.

“They came back to where it all happened to have some fun playing Survey Says and brought friends and family,” he wrote on the website.

Carlos, another participant in a speed dating event that took place in 2019, also said he found love.