The Scoop: Table 87 gained national fame on the TV show “Shark Tank,” but local Brooklynites have known about the by-the-slice, coal-oven pizza place for years. The concept is ideal for a date night where one person wants a meaty slice while the other prefers the classic Margherita. Table 87 offers a full dinner menu as well. For an at-home date night outside of New York, couples can find a frozen Table 87 pizza in many grocery stores around the country.

Thomas Cucco is a Brooklyn native, and he epitomizes New York with his accent and no-nonsense attitude. He brings that same personality and attitude to his pizza shop, Table 87, which he opened in 2012.

Table 87 specializes in coal-oven pizza, and Thomas confidently presented his business to the panel on the ABC TV show “Shark Tank” in 2015. It’s the “home of the coal-oven slice,” he said. He offered the Sharks 10% equity in his company in exchange for $200,000 in the “frozen pizza game.”

He knew that his company was the only one to offer a frozen version of coal-oven pizza, and Table 87 was the first shop in Brooklyn to offer hot, coal-oven pizza by the slice. Thomas’ skilled chefs use only authentic ingredients, including fresh mozzarella, fontina cheese, parmesan, San Marzano tomatoes, 100% olive oil, and fresh basil.

Table 87 makes coal-oven pizzas for daters in Brooklyn and the country.

Table 87 doesn’t serve the fold-in-half, eat-standing-up kind of slice. It coal-fires its pizzas in a 900-degree oven, which flash-cooks the pie in under two minutes for a crispy date night meal. Will couples find a better coal-oven slice in New York? As Thomas said on “Shark Tank”: “Forget about it!”

In the end, Shark Tank’s Lori Greiner inked a deal for 18.5% equity in the company. It was an offer Thomas, or Tommy as his friends call him, couldn’t refuse.

“We love to say, ‘No place in the world is more famous for great pizza than New York City.’ And, to be more specific, Brooklyn,” said Robert, a Spokesperson for Table 87.

Today, Table 87 makes for a casual and fun date spot. Along with pizza by the pie or slice, diners can order from its full dinner menu, share a bottle of wine, and enjoy an authentic taste of Italy in the Big Apple.

New to New York: Brooklyn Coal-Oven Pizza by the Slice

When Thomas opened Table 87 on Atlantic Avenue in Brooklyn Heights, it was a proud day. He said he had always dreamed of offering coal-oven pizza by the slice, because when he was growing up, it was impossible to find.

“You had to buy the entire pie. Being stuck with six slices wasn’t always the best option, and surely, not the most affordable,” Robert said. “If you walk into any of our three Brooklyn locations, our counter is filled with an assortment of coal-oven pizza. We’ve stuck to the basics, and the classic Margherita slice is our most popular item.”

Although the “Shark Tank” appearance allowed the restaurant to grow into a frozen pizza provider, Table 87 remains a family-owned and operated local business. 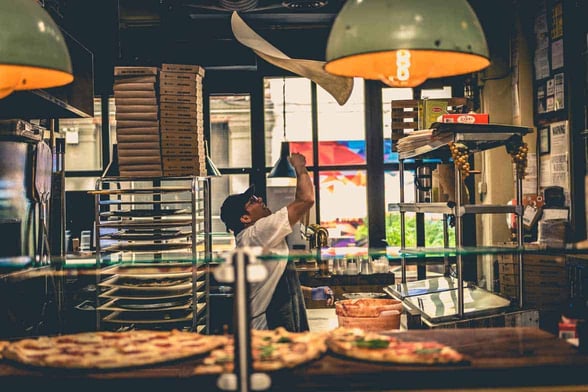 Table 87 was the first Brooklyn eatery to sell coal-oven pizza by the slice.

“Thomas is a driven professional restaurateur who has been at the helm of the business since inception,” Robert said. “With more than 20 years of restaurant business experience, Thomas is committed to making Table 87 the best destination for an authentic coal-oven slice of pizza.”

Over the years, Thomas has also carefully selected his staff members, including employing his sons Robert and Thomas. Couples on a date may even get to see one of the pizza chefs slinging a pie dough into the air. On “Shark Tank,” the chef even flung the dough behind his back.

“We take pride in what we do and take our mission seriously to provide a quality pie, every time,” Robert said. “We’re constantly working to improve the quality of our customer experience and service.”

Take a Pizza Making Class or Split a Pie

Robert said that Table 87 attracts guests from all over the city, nation, and even the world. And people who have a variety of tastes enjoy coal-oven pizza.

“We love our guests. Without them, we’re nothing,” he said. “It’s great to see the way a slice of pizza can bring all types of people together. There is something great about sharing a pizza. Table 87 is a great place for families to bring their children, for first dates, for business meetings, and gatherings.”

Table 87 has three shops, located in Brooklyn Heights, Gowanus, and Industry City. The Gowanus location is a daily stop on the Pizza Tour of NYC.

Those who live outside of the city can purchase a frozen Table 87 pizza from one of many grocery chains throughout the U.S. The frozen version is just as delicious as the pizza a customer would order at the shop, and it is quick to prepare. Diners simply preheat the oven and baking sheet to 400 degrees, cook the pizza for seven to nine minutes, and enjoy. 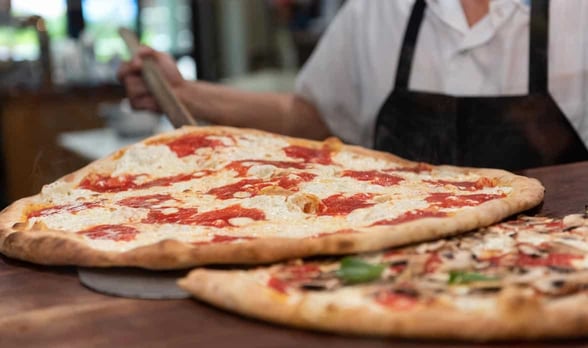 Couples around the U.S. can pick up a frozen Table 87 pizza to enjoy on date night.

Along with a delicious dinner, dates can visit a Table 87 location in Brooklyn for a pizza-making workshop. The restaurant plans to resume those workshops once the stay-at-home orders connected to the COVID-19 pandemic are lifted. The 1.5-hour class teaches couples everything about pizza making so they can duplicate some of the famous Table 87 recipes at home.

Of course, that’s challenging without the right ingredients. That’s why actor Emily Blunt told Vanity Fair that Table 87 is the best pizza she’s ever had in New York.

Table 87: Classic Tunes and a Full Dinner Menu for Couples and Families Alike

Daters can visit Table 87 for any style of classic coal-oven pizza they desire, but the restaurant also has an extensive dinner menu available. The restaurant’s atmosphere is warm and inviting, too.

“Our dining rooms are small and intimate. Each has antique accents with a true ‘home’ feeling,” Robert said. “Some of our most popular dishes include eggplant parmigiana, penne alla vodka, baked clams, and fried calamari with hot cherry peppers.”

Robert also recommends the 12″ burrata Margherita pizza. It’s got a creamy and unusually soft texture, and it’s the perfect size for two guests to share on a date.

It helps that the three locations also pipe in classic music and feature conversation-provoking decor. Table 87 offers a large selection of beer and wine chosen by curators to create nostalgic feelings.

“Our comfortability is unmatched,” Robert said. “And our open kitchen allows our guests to see everything that goes on in the kitchen.”

Couples can also purchase frozen pizza from Table 87 online through its Shopify page and have them delivered anywhere in the country. That way, anyone can enjoy the taste of a coal-oven slice — just like Thomas wanted.

“Table 87 has character,” Robert said. “Thomas’ mission to offer coal-oven pizza by the slice is finally a reality.”