The Scoop: Many people struggle with unhealthy relationships and sexual behaviors because of abuse, trauma, or a strict religious upbringing. But talking about the past and the shame they feel can also help them work through it with a smile, according to Amy Baldwin and April Lampert. As co-hosts of the Shameless Sex Podcast, the two friends use their personal experience and training within the sex toy and relationship coaching industries to help listeners overcome barriers to fantastic sexual experiences. Along with regular podcasts, they also offer an online video series and in-person workshops.

Good sex can be tricky, especially for those battling underlying emotions that often bubble up as shame. Many people create internal blocks that stop them from completely enjoying intimate touch and physically expressing their love.

The shame surrounding sex can manifest itself in the inability to become aroused or a feeling of disgust about one’s body. It can make it hard to communicate with a loved one and turn sex into a problem instead of a joy.

As Co-Hosts of the Shameless Sex Podcast, sex experts Amy Baldwin and April Lampert help people work through feelings of inadequacy, fear, confusion, and secrecy that comes from shame. Their empowering and open dialog helps their listeners replace all of those negative feelings with plenty of memorable orgasms.

“The whole premise of the podcast is not getting rid of the shame but to work through shame. We look at shame as a teacher,” Amy said. “We inspire listeners through open conversations about sexuality to help work through their shame and trauma. Then, they can reclaim who they are as sexual beings. And they can make their own rules around arousal, sex, and desire, as opposed to what society tells them they should be. That’s why they are ashamed in the first place.”

The Shameless Sex Podcast covers a range of topics, but the ideas mostly come from listeners. And Amy and April continue to focus on helping singles and couples be the best lovers they can be — both for themselves and their partners.

The Podcast Began as a Conversation Among Friends

Amy and April have been friends for more than 14 years, and they both have a background in the sex industry. When Amy opened a sex toy store with her mother in Santa Cruz, California, they hired April as their manager.

Amy became a sex educator and relationship coach, and she and April were invited as guests on the “Sex With Emily” podcast. Amy said she was going through a breakup at the time, and April had recently divorced. As it turned out, they had a lot to talk about.

“April and I just had so much fun, and we loved our dynamic,” she said. “After that, we decided we would start a podcast. It was just a passion project, just for fun. We never intended it to be a business or be as big as it is now. It just turned out that way.”

Amy and April have cultivated a large following of faithful listeners who are often in long-term relationships or marriages and are experiencing a rough patch. Singles also tune in, often to become more empowered and proactive in the bedroom.

Slightly more women than men listen, and most are in their early to mid-30s and live in the United States, Australia, and the United Kingdom. But, according to Amy, anyone looking for “a way to up their sexual and relationship game” could benefit from tuning in.

Episodes Are Playful Yet Grounded

April and Amy gear their topics toward the concept of sexual mastery. They said they seek to educate listeners by mixing in personal stories along with the research that supports their advice. It’s playful yet grounded, Amy told us. 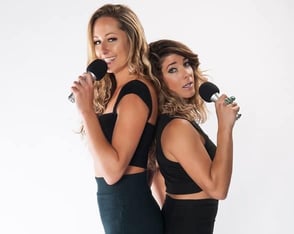 Amy Baldwin, left,  and April Lampert talk about their own experiences and those of their listeners on the Shameless Sex Podcast.

No topic is taboo, which the podcast name underscores. They’ve talked about how to better give oral sex and how to have bigger, stronger orgasms. The most popular podcast episode is titled, “How to Eat Pussy Like a Champ.”

For listeners, it’s kind of like sharing a glass of wine with two friends. For example, during “The Breakup Episode,” Amy was going through a breakup — although they’re back together now. She talked about what it felt like to grieve and cry for hours. Amy and April also gave tips for how to work through the tough times of heartbreak that come with being newly single.

“We received around 12 or 15 comments or emails from listeners who said they were going through something similar. They were so grateful to know that they were not alone,” Amy said. “They say, ‘Thank you for sharing a personal experience,’ but it lets them know they’re not broken, they’re normal.”

Shameless Sex Podcast’s Future: A Book and an Educational Program are in the Works

Even though the podcast is filled with helpful advice, Amy is quick to add that their advice isn’t the only way to deal with sexual challenges. In fact, that’s part of the whole point of the experience. Everyone can choose what is right when it comes to finding sexual pleasure — either by themselves or with others.

To that end, the sex podcasters said they were interested in writing a book to help people address some of the more common issues that bring shame into the bedroom.

Since they both also have an extensive background in the sex toy industry, Amy and April are working on creating a sexual education program for workers in retail stores. Often, people who are selling sex toys don’t have a lot of training that could help singles or couples have better sex lives.

“Salespeople are not sex educators, but we can bring education into those places so they can help their customers,” Amy said.

Of course, Amy and April also plan to move forward with plenty of new podcast episodes. They said it’s motivating to hear that they are helping people as they work through whatever makes them feel bad about sex. Frequently, they receive emails from singles who say they’ve had intense sexual trauma that caused their bodies to shut down or have been in relationships where they didn’t feel safe.

“We hear a lot of gratitude to know that they’re not doing it wrong,” she said. “Our podcast helps them break down that wall and finally reach out and find a therapist or start speaking up for what they want in touch and relationships. It’s so rewarding to hear.”