The Scoop: Jeff Taylor, a Northwest transplant living in Topeka, Kansas, started missing the tasty brews from his former home. So, in 1993 he decided to launch PT’s Coffee to provide people in Kansas with a taste of what they were missing. Over nearly three decades, Jeff and his team have worked to create the best cup of coffee by roasting beans in-house and developing direct trade partnerships with local farmers in Guatemala and other regions. And PT’s Coffee products have become so popular with individuals and couples that it now has four coffee shop locations in Topeka and Kansas City. PT’s Coffee also sells its flavorful beans online to both local businesses and coffee aficionados nationwide.

For a first or second date, meeting at a coffee shop is an excellent way to get to know someone in a low-pressure setting. Daters and couples in Topeka and Kansas City, Missouri, often choose PT’s Coffee as their meeting spot, not only for its low-key vibe but also its high-quality roasts that bring richness and warmth to their conversations.

PT’s Coffee locations are calm, welcoming spaces with warm lighting and inviting tables. And once people find the perfect table, they have plenty of drink options — from standard brews to original concoctions. 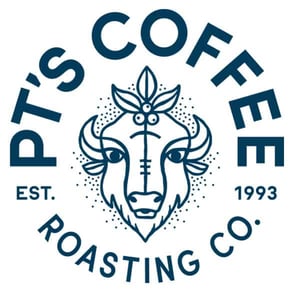 Coffee aficionados can opt for the pour-over bar, where a barista makes cups of direct trade coffee to order.

Jeff Taylor, Co-Founder of PT’s Coffee, recommends the nitro cold brew — a cold-brewed coffee charged with nitrogen and then infused with vanilla flavor. He also suggests the honey vanilla latte and the matcha latte.

“We also have delicious seasonal flavorings. One of them is called Sweater Weather, and it has that warm campfire flavor to it,” Jeff said.

The coffee shops also offer breakfast until noon and lunch until 4 p.m., and the menus have something for everyone. For a breakfast date, the establishment has a decadent buttermilk biscuit sandwich, made with egg, tomato, and hollandaise sauce.

But PT’s Coffee is mainly known for its delicious roasts, which Jeff himself yearned for after moving to Topeka from the Northwest in 1993.

“After a year of living in Topeka, I realized I was missing the lattes that I could get in the Northwest. I started looking around, but I couldn’t find anything except a coffee shop that was 30 miles away,” Jeff said.

To satisfy his craving for quality coffee, Jeff would drive those 30 miles every weekend for a latte. While driving that route, he thought about how great it would be if he could get a great cup of coffee nearby.

So, Jeff decided to start brewing his own in Topeka — and PT’s Coffee was born.

A Mainstay on the Kansas Coffee Scene Since 1993

In the late 1980s, Jeff was living in the Northwest, where Starbucks popularized coffee carts and Italian-style coffee — including lattes and mochas — in the Pacific Northwest. But when he moved to Topeka, Kansas, in the early 1990s, he couldn’t find coffee shops serving anything similar.

“I opened up my shop, mostly because I wanted a good cup of coffee,” he said.

It turned out that Topeka was more than ready for a new coffee option. From the beginning, PT’s Coffee had a line that extended out the door. And soon after the first location opened, the shop already had enough business to open another.

Because of that early success, Jeff thought the coffee he brewed was fantastic. But one day, a customer approached him on the street and told Jeff that he’d visited PT’s Coffee.

“Things were going well for us, so I was waiting for him to give me a compliment,” Jeff said.

Instead, the customer told Jeff how terrible he thought the coffee was. Humbled, Jeff went back and sampled some of his own coffee — and realized that it wasn’t as good as he thought it was.

He knew that the buzz surrounding his business wouldn’t keep it popular without better coffee quality. So he made it his mission to make a better brew, and Jeff set out to find coffees that were as tasty as those he remembered from the Northwest.

He ordered coffees from roasters around the country, but once he brewed them, none met his high standards. Then he had an epiphany — shipping the roasted beans was what ruined their natural flavor.

After Jeff’s aha moment, PT’s Coffee began roasting its beans in-house in 1997. Eventually, the company hired a Head Coffee Roaster who would be in charge of the burgeoning roasting operation.

“I realized the thing that would keep us in business would be quality roasts and products,” Jeff said.

In 1999, Jeff and his team made their first trip to Guatemala to establish direct coffee trading relationships with local farmers. In the 1990s, most coffee shops weren’t directly  trading with farmers for their beans. But Jeff realized that contracting directly with coffee producers — and then roasting their high-quality beans in-house — was the only way to ensure tasty brews. 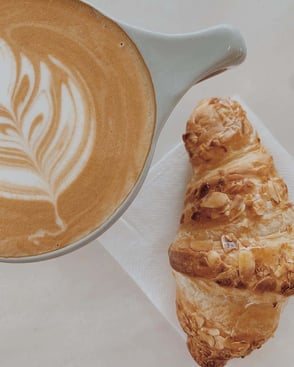 Since then, Jeff has expanded his coffee-buying team to four people, including his wife — who was born in Colombia.

“She moved from a city of 11 million people to Topeka, Kansas, to help me in the coffee business. Now, there are four of us who buy the beans and our head roaster,” Jeff told us.

Today, Jeff is confident in his coffee product and sells it not only in four Kansas PT’s Coffee locations but also to wholesalers, restaurants, businesses, and online customers. And his buying-and-roasting formula was so successful that the company was named the Roaster of the Year by Roast Magazine in 2009.

With such a commitment to great-tasting coffee, it’s no surprise that PT’s Coffee has maintained such a devoted clientele throughout the decades. According to Jeff, the PT’s Coffee crowd was mostly the “cool” kids looking for the next hip thing back in 1993.

“The demographics have changed over the years, and they’re still evolving. Now, it’s many people in their mid-20s to mid-50s,” Jeff said.

“We had one older couple who’d come in every day and share coffee at our place. Mark passed away 10 years ago, but his wife Phyllis still sends me Christmas cards every year. They were an important part of our business,” he said.

He also said that even some employees have found their spouses at the coffee shop. And he’s even seen three or four of those relationships lead to marriages.

Out of Jeff’s own need for a good cup of coffee, one of Kansas’ longest-running coffee houses was born. And 27 years later, PT’s Coffee is certainly no longer the new shop on the block, but it’s still attracting a devoted group of coffee fans. The company’s commitment to direct-trading for 80% of its beans and in-house roasting have helped add to that legacy.

Now, daters and couples in Kansas have somewhere to turn for a delicious cup of coffee inspired by the Northwest.