The Scoop: Richard Porter is such a big Beatles fan that he’s devoted his life to learning all he can about the supergroup. For the last 30 years, he has shared his knowledge with hundreds of thousands of tourists on his London Beatles Walks. Richard offers the two-hour tours nearly every day, and takes Beatles-loving individuals, couples, and families to notable sites around London, including Abbey Road and locations where the group filmed “A Hard Day’s Night.” Tour participants will leave London Beatles Walks with a wealth of tidbits, some of which only Richard can tell them.

Many couples who count themselves among the millions of Beatles fans around the world may seek to immerse themselves in some of the band’s history by taking a trip to London. But for those who really want to walk a mile in the band’s shoes, there’s no better tour guide than Richard Porter, who has taken guests on London Beatles Walks for the past 30 years. 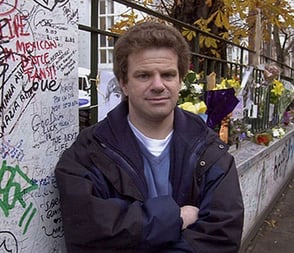 Richard Porter has been leading couples on Beatles Walks throughout London for more than 30 years.

Richard estimates that he guides about 7,000 people on his tours each year. Over the past 30 years, he’s helped more than 200,000 Beatles fans learn new things about the supergroup. He’s also had plenty of repeat visitors.

“One guy has come on the tour 40 times over the years. A lot of the people have been on tours 20 years ago and come with their kids. I’ve even seen Paul McCartney on the tour a few times,” he said.

Richard is a student of all things The Beatles, and he never tires of learning more about his favorite band. He adds what he’s learned to his tours, offering clarifications of debunked stories or adding newly relevant stops.

“I’m always meeting new people and hearing stories, so there’s always new stuff to learn and incorporate. I like doing things on anniversaries, so that keeps it fresh for me — and my guests,” he said.

He enjoys sharing those stories — new and old — with individuals, couples, and families on the historic streets of London that The Beatles once called home.

Couples Learn Plenty About the Group on the Walking Tour

Depending on their interest level, couples can choose between Richard’s two most popular Beatles tours, both of which take participants to many noteworthy sites in two hours.

The first, the Magical Mystery Tour, meets in the West End of London, where the Beatles had several performances and recorded some of their best music. Some of the major stops on this tour include Paul McCartney’s office, the studio where the band recorded “Hey, Jude!”, the theater where Beatlemania began, the rooftop concert location for “Let It Be,” and the place where John Lennon met Yoko Ono.

The tour ends at Abbey Road, the famous recording studio where the Beatles recorded the album of the same name. And, yes, most tour attendees stop to take pictures at the crosswalk made famous by the Abbey Road album cover.

“We’ve had a few marriage proposals on the Abbey Road Crossing. But it could be the shortest engagement of all time if you get run over!” he said with a laugh.

On Tuesday and Saturday mornings, Richard takes guests on the “In My Life Walk” to visit noteworthy residential stops in London’s Marylebone district. Some of the stops on this tour include filming locations for “A Hard Day’s Night,” an apartment where Paul McCartney lived with his longtime girlfriend in the 1960s, and an apartment where Ringo, John and Yoko, and Jimi Hendrix lived at separate times.

That tour ends at the famous Abbey Road.

“You can’t do a Beatles tour and not go to Abbey Road. It’s like doing a royal London tour and not going to Buckingham Palace. It can’t be done,” said Richard.

How did Richard become what The Age, an Australian news site, called “the smartest man in Britain — at least when it comes to The Beatles”?

When he was 13 years old in 1976, his interest in the group skyrocketed when the band’s record label re-released its greatest hits. Those songs quickly shot back to the top of the charts.

“At first, I was very isolated in my Beatle fandom. My interest coincided with the punk rock boom and all the other boys in school were into the Sex Pistols and the Clash. Being a Beatles fan was not regarded as hip,” he wrote. 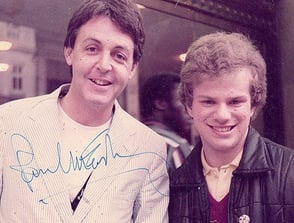 Richard became a Beatles fan at age 13 and has even met Paul McCartney a handful of times.

Richard said he became such a huge fan that he was devastated by John Lennon’s tragic death in 1980. He said he put an ad for Beatles penpals into a magazine and received an enormous response. Eventually, he met so many other fans of The Beatles that he started the London Beatles Fanclub in 1988.

When he was a little older, Richard said he began researching the well-known spots in Beatles history and put together a tour for his friends, family, and other members of his fan club.

That became so popular that he eventually started offering the tour to the public.

“About 28 years ago, I started doing it full time,” Richard said.

Now, Beatles fans are anything but rare, and Richard said he sees young and old fans of all nationalities on his tour.

“We get older people who were fans of the Beatles from the 1960s, but we also get people of all ages. Sometimes, I get kids dragging their parents along. If you’re interested in music and The Beatles, then come on the tour,” he said.

Richard is not currently offering his tours due to the global COVID-19 pandemic. But he is still optimistic about the future and plans to start operating again right when London opens back up.

Private tours are available for couples who love The Beatles and want a more intimate experience away from the crowds. The more private setting allows guests to ask Richard questions that they may not have a chance to on his other tours.

“I give private tours eight days a week,” he joked. “And I’ve had people on their honeymoons come on the tour.”

Guests can also take the Die-Hard tour, designed for Beatles fans who have already taken the other two tours. Participants on the Die-Hard tour see the only apartment where the Beatles lived together, the record shop where, according to Richard, “a chance meeting led to The Beatles getting their first recording contract,” and the Les Ambassadeurs Club, where two scenes of “A Hard Day’s Night” were filmed.

Richard also has big plans for creating a new tour that will take fans to other parts of the city. He wants to take fans on what Richard calls “a psychedelic mini-bus” tour of more locations than they could see on footAs on all his tours, Richard offers tidbits about the Fab Four that guests may not otherwise know.

For instance, did you know that the album “Abbey Road” was originally going to be called Everest? Or that the iconic crosswalk photo was supposed to be taken at the mountain’s summit?

Richard especially enjoys that the Beatles are as popular in 2020 as they were in the 1960s.

“The 1960s were all about love and peace, an attitude that still resonates today. I get people from all over the world on the tour who appreciate that message,” he said.