The Scoop: Music can be a natural accompaniment to at-home date nights because it sets the mood and gives couples something they can enjoy together. If you want to upgrade your romantic playlist, you can download the Incredibox app (or visit the free demo on the website) and create unique musical mixes full of fun and personality. A colorful crew of beatboxing avatars sets the beat, and you can personalize the tune. Since its launch in 2009, over 50 million users have hit play on Incredibox and wowed people with their musical creations.

In 2009, three friends decided to combine their talents for coding, music, and graphic design by creating an online game that revolved around beatboxing. Allan Durand, Romain Delambily, and Paul Maulburet had completed graduate school and were working as freelancers in France when they started building the Incredibox flash game in their spare time.

“In the beginning, there was no strategy to the project,” said Allan, the coder behind Incredibox. “This project was only for fun — because above all we love to experiment and create something by mixing our skills and ideas.”

Incredibox can rock your world with its engaging and visually striking beatboxing game.

After many late nights, the Incredibox website went live in 2009 and was a huge success. The three friends capitalized on the beatboxing game’s popularity and expanded it year after year. In 2011, they founded a graphic design company called So Far So Good and turned their fun side project into a full-blown business.

To date, the Incredibox website has seen over 50 million hits, and the app has more than 400,000 downloads and is currently ranked #2 in the music app category on the App Store, where it boasts a 4.9-star rating.

If you want to break the ice on a date, you can play around with Incredibox and create an upbeat music playlist that expresses your creativity and sets the right tone for your evening.

“We wanted to create a web interface on which anybody could create music,” Allan said. “It’s more than a game — it’s an original visual and sound experience. It was just a fun friends project at first, but now it’s become our real job.”

Over 50 Million Users Have Joined the Fun

Incredibox’s unique and creative game catches people’s attention right away. You can select your own band of blinged-out beatboxing characters — couples probably want to choose The Love group — and then start playing around with the musical styling until you’ve created a composition worth sharing.

Music lovers create a new mix on Incredibox every 30 seconds. The website offers a free demo, while the app costs $3.99 to download on any mobile device.

Over 50% of Incredibox users hail from the U.S., and about 60% are men. A majority of users are younger than 20, and 20% are between 25 and 35. However, the app has no age limits or restrictions. It has an age rating of 3+ years old in every app store, so anyone with basic hand-eye coordination and an ear for music can join the fun.

Since its launch nearly a decade ago, Incredibox has picked up an international following. The website has seen over 50 million views, and the brand currently has over 400,000 fans on various social media platforms.

Couples can make music together on Incredibox by using the same interface to add and remove sounds until they wind up with something that’s a little bit of both of them. It’s a great way to share your ideas and inspiration with a partner. The playful spirit of Incredibox keeps people talking and listening as they create something wonderful.

“Incredibox helps people to cooperate with one another,” Allan said. “We have seen parents, kids, friends, and couples creating music together and being entertained by it.”

Incredibox empowers music lovers to experiment with different sound combinations and visuals. You set the stage, you choose the characters, and you end up with great mixes that can be shared with those you love.

If you enjoy the free demo on the Incredibox website, you can download its app to enjoy more entertaining and interactive features. You can find the Incredibox app on the App Store and Google Play, but it’s also available in the Amazon Store, the Mac App Store, and the Microsoft store.

“This game is amazing,” said Jaiden M. in a Google Play review. “You can even make music offline and use different characters that make different sounds.”

The Incredibox app lets users choose from six musical atmospheres — Alpha, Little Miss, Sunrise, The Love Brazil, or Alive — and then drag and drop clothing icons onto the avatars to make them sing and beatbox. If you find the right sound combinations, you could unlock animated choruses (short video clips) that’ll enhance the mix.

After playing around with the sounds, you can record and share your favorite tunes, and you can add lyrics or a dedication to let that special someone know you care. 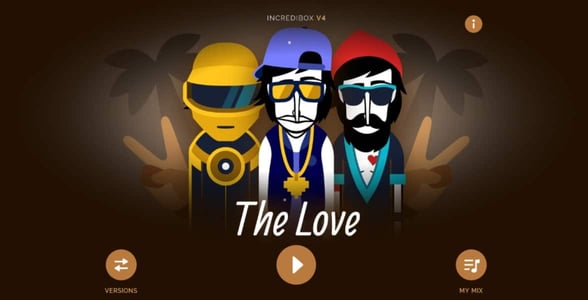 In total, users have recorded over 6 million mixes on Incredibox.

Every time you record a mix, it becomes part of your Mixlist. You can manage tracks in your Mixlist by reviewing, sharing, downloading, or deleting them. The app lets you download your mixes as MP3 files, so you can listen to your tracks anytime you like.

Once you make your mix public, users can vote for it, and those with the most votes go down in Incredibox history by ranking in the Top 50 Chart.

Incredibox is a music app that lets you create your own music with the help of a merry crew of beatboxers. Part game, part tool, Incredibox is above all an audio and visual experience that has quickly become a hit with people of all ages.

Powered by a Tight-Knit Team

Incredibox was built on three pillars: code, art, and music. Allan takes care of the coding, Romain handles the app’s overall design, and Paul oversees the musical creation. These three music enthusiasts met in graduate school and became friends because they shared a similar creative spirit.

Allan taught himself how to code so he could pursue a career as a web developer. He is the tech whiz behind the game’s fun features and streamlined interface. He’s in charge of handling all the technical aspects of the Incredibox website and app.

“As a manager, my first mission is to globally take care of the project and team,” he said. “Then, as a coder, the main part of my job is to bring together musical and graphic content in an interactive interface by typing thousands lines of codes. The code is the binder letting the Incredibox app to work. I’m also in charge of the 2D character animations.” 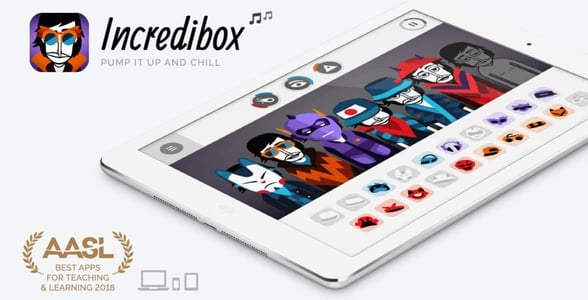 Incredibox is a fun game designed by three creative Frenchmen.

Romain draws every character, costume, and video clip you see in Incredibox. His artistic eye is behind every graphic that makes the game look so good. He uses his imagination to dream up funky and fresh designs to delight people of all styles.

Finally, Paul brings the beats and is the musical talent behind Incredibox. He is behind all the sounds you hear during the game. Every click, pop, and scratch in the mix comes from Paul’s mouth. When not tweaking the sound design on Incredibox, Paul pursues his own musical career as the Incredible Polo.

These three talented Frenchmen have pooled their skill sets to make Incredibox the wonderful game it is. Now, they are hard at work creating a more colorful and rhythmic version of the app (this will be version 7), so users should keep an eye out for updates on Facebook or Twitter.

Incredibox: A Beatboxing App You Didn’t Know You Needed

Incredibox is the brainchild of a programmer, a graphic designer, and a musician, who also happen to be best friends. This beatboxing game offers a dynamic way to make music with friends, dates, or on your own. You don’t need to have any musical experience to create an awesome tune on the platform.

Instead of making a mixed tape, daters can make a beatboxing mix that’ll blow their significant others away and provide the perfect background music for a romantic evening.

Since 2009, Incredibox has earned many positive reviews and accolades in the media, but Allan said it’s the testimonials, reviews, and thank-you messages sent by users that mean the most to the team.

“When we receive nice comments from users, we feel that we have brightened up their day for a few minutes, and that motivates us to continue to improve our project,” Allan said. “That’s why we have created it: to allow anyone to have fun and entertain themselves while engaging in the process of musical creation.”