The Scoop: Deepfakes are a relatively new phenomenon in which people use artificial intelligence and digital technology to doctor videos and photos. The troubling practice can even manifest itself in dating profiles and presents an increasingly viable technique for people to catfish unsuspecting singles. Deeptrace is developing a set of products that help companies identify deepfakes and reduce user exposure to blackmail or other malicious acts. Deeptrace seeks to not only spread the word about deepfakes but also innovate technology to stop people from exploiting others.

Many online daters may not be familiar with deepfakes, which are a relatively new phenomenon but a growing cyber threat. The trend involves creating videos and photos using artificial intelligence and digital technology to alter the appearance of someone. Deepfakes — from a fake video of Kim Kardashian rapping to a doctored interview of President Barack Obama insulting a political rival — can be entertaining, but they also have the potential to hurt people.

As technology becomes more refined, it can become more difficult for people to tell what is real and what is manipulated content, and that could affect people in everyday life, according to Henry Ajder, the Head of Threat Intelligence with Deeptrace, a software that can identify deepfakes.

Deeptrace Head of Threat Intelligence Henry Ajder talked about how he identifies deepfakes.

“If someone wanted to make deepfakes for a dating profile impersonating you, they just need access to your Instagram or your Facebook photos. They could insert your face into videos by face swapping or changing body movements,” he said. “As the technologies for creating deepfakes continue to improve and require less data, you could easily see someone being catfished by a person impersonating someone else.”

It’s also possible for a malicious actor to cause serious harm to someone’s reputation or threaten embarrassment if they don’t pay a ransom. With that technology looming, singles may want to think twice before completely trusting an online dating profile.

When you can’t trust what you see and hear, online dating can become a challenge. Deeptrace developed technology that identifies those deepfakes, and companies, including social media channels and online dating sites, can leverage Deeptrace to ensure users stay safe while connecting with authentic people.

Deeptrace began in 2018 when professionals from a variety of different backgrounds came together over concerns about deepfake technology. Henry is one of three co-founders, who include Giorgio Patrini and Francesco Cavalli. Henry had an academic background in philosophy and had researched the topic for NGOs, while Giorgio and Francesco had tech backgrounds and a shared passion for social causes.

“They realized that the speed of the technology was advancing, and there was going to be a need for countermeasures,” Henry said. “We’re not under any illusion that tech is the only thing that can solve the problem, but we think it will play an important part.” 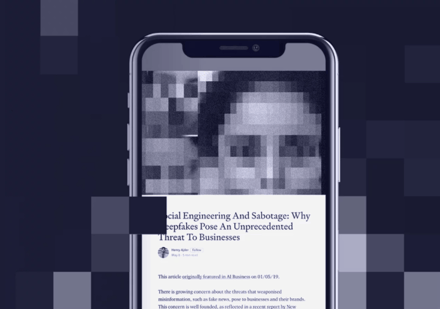 Deeptrace’s founders studied the emerging impact of deepfakes on the lives of internet users.

The company launched in January 2019, and some of its top leaders are based in Amsterdam, while Henry lives in the United Kingdom. They combine their tech and business expertise to fight the threat.

The vision is to create and disseminate tools that will stop people from being scammed, defamed, or harassed. Unfortunately, the problem may only get worse before it gets better. But the young company is determined to help.

“Everyone is friendly and excited by the progress. We’re a young startup with open-minded people who want to make a positive impact in the world,” he said.

The team not only develops new technology that can recognize deepfakes, but also invests in threat research to better understand and share accurate information about the problem. Deeptrace also seeks to educate key stakeholders who are concerned about deepfakes, including governments, NGOs, and charities working in intelligence and human rights cases on the issue.

The company’s flagship product is a detection tool that it likens to antivirus protection against deepfakes. Just as antivirus software alerts users to a suspicious attachment in an email, Deeptrace’s tool will let you know when a photo or a video has been altered.

It’s surprisingly hard for the average person to tell when digital content isn’t real. That’s why the technology uses a dynamic deep-learning network to recognize slight clues in visual artifacts. The company has created an algorithm that identifies irregularities in lighting or facial profiles that may be impossible to detect with the human eye.

The tool zooms in on features and, perhaps most importantly, learns from new content. Henry said it’s becoming increasingly common for bad actors to attempt to reverse-engineer detection systems to figure out ways to bypass them. That’s why research and dynamic improvements are part of the company’s strategy for success.

The Deeptrace algorithm can detect deepfakes in everything from pornography to online dating profiles.

“As deepfakes continue to develop and become more realistic, if you see an image or video of someone you don’t know, how can you trust that?” he said. “The monitoring capabilities help people understand where and how these things can spread.”

If someone is using a synthetic image, the detection tool automatically alerts users that it has been altered or manipulated.

Deepfakes could become a significant problem on the internet, and online dating sites may be a prime target for malicious actors. Online daters could waste time — or worse, fall victim to a scam — by pursuing someone who isn’t even a real person.

“We frequently see people ask malicious actors on forums, ‘I saw this girl on Instagram. Can you make a deepfake of her?'” Henry said. “There are a lot of different threats and ways that deepfakes and synthetic media could impact the dating app scene.”

Of course, some apps are using verification techniques like taking selfies or sending in a copy of an ID. But having a technology tool like Deeptrace is easier for end users, and can improve the integrity of the platforms, too.

Henry said the team is passionate about helping people avoid the serious problems that deepfakes can spawn. By using the latest technology, everyday people can trust that the people with whom they interact on the internet are real. It can also help people learn about the world around them — while protecting them from fraud or cyber attacks.

“We’re driven by the desire to help people with this problem,” he said. “Victims from marginalized backgrounds and so many women are being targeted by this. It could be your wife, daughter, or girlfriend. No one is immune, and it doesn’t have to be completely realistic to be embarrassing and mentally distressing.”