The Scoop: Since its launch in 2014, Stremio has become a hub of video entertainment with over 6 million users worldwide. The video streaming and aggregation platform offers movies, TV shows, and video content sourced from third-party services around the world. You can use Stremio’s simple browsing and calendar features to select the right movie and set the mood for your evenings at home with someone special.

Some of my best dates have been movie dates. I enjoy being able to share the thrills, laughs, and sappy moments alongside someone else, maybe whispering the occasional joke or prediction along the way. Watching a film together gives you a chance to unwind, and it can lead to stimulating conversations about the plot, characters, or message. 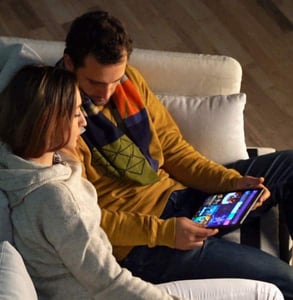 Stremio allows daters to discover movies to watch during those romantic nights in.

However, going out on movie dates week after week can get pretty pricey. Especially if you’re like me and can’t resist the tempting salty smell of popcorn or the rows of candy on display. If you love the movies but are running low on cash, you can always start planning a movie date at home. You can pop your own popcorn and find a popular flick on Stremio, a streaming app that features a well-organized and comprehensive video catalog.

Stremio helps viewers find, favorite, and watch video content available on major streaming services, including Netflix, HBO, Amazon, iTunes, and YouTube. The app facilitates the viewing experience. Whether you want to binge-watch a television series or pop in a beloved rom-com, you can search the platform to discover great titles available to watch instantly.

Stremio is available for download on both desktop and mobile devices, and couples can use Chromecast to watch romantic videos on their televisions at home. This technology is incredibly useful for couples looking to “Netflix and chill” without subscribing to Netflix.

“The user can access everything they’re interested in in one place,” said Dimo Stoyanov, who co-founded Stremio in 2014. “It’s an aggregation tool.”

Find Films or TV Shows for an Upcoming Date Night

Stremio is a one-stop shop for video content pulled from streaming services across the web. Stremio users can watch thousands of shows, movies, and videos sourced from third-party websites. Its ever-growing list has a little something for everyone. Whether you want to snuggle up during a horror film or take a trip down memory lane with a ’90s show, you can find just about anything on the app. 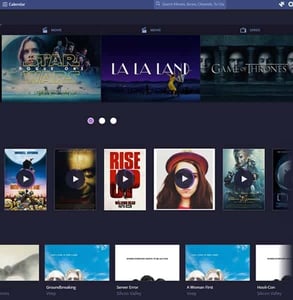 Stremio makes it easy to organize your video library, set up a curated playlist, and start watching.

The company makes videos easily accessible. No more searching through multiple platforms and signing up for multiple subscriptions. Stremio puts a world of content into your hands. “What we do best is bring people together for a movie night,” Dimo said.

The Discover section helps users pinpoint popular titles in no time. Couples can scroll through this shortlist to pick the perfect date-night movie together. The Calendar feature on Stremio can help daters keep track of upcoming shows and videos to watch and plan a date night centered around their favorite content.

Users can also sort video content by channels, genres, and titles. Adding a favorite title to your Library allows you to quickly access it again and receive notifications when new episodes or similar content is available. Stremio uses your selections on the platform to recommend similar titles to you.

This hub of entertainment can help couples find a movie or TV show they both love. There’s no need to limit yourself to one subscription and one movie list — you can see titles available on Amazon, YouTube, and numerous other sources on Stremio.

“You can scroll forever,” Dimo said. “It’s content. Tons of it. And people can find almost anything they want to watch on it.”

Over 6 Million Downloads & a Growing Community

Stremio is a useful tool in the pocket of movie lovers around the world. Over 6 million people have downloaded Stremio, and that community is growing larger every day. A 24/7 customer support desk ensures customers are satisfied with their experience and understand how to use the app to make movie nights a breeze.

Stremio gives its users the ability to keep track of their favorite shows.

As word spreads about Stremio, hundreds of new members sign up every day. Stremio’s early adopters are primarily young movie lovers with an eye for the next big thing. They are open-minded and looking for an aggregate video service that can cut through the noise and deliver on the goods.

A growing list of testimonials speaks to the effectiveness and utility of Stremio’s organized dashboard and streaming service. “Stremio has become a part of my life as much as the internet itself,” said Alex, a graphic designer who regularly watches shows and movies on Stremio.

“Keep up the great work,” said a Stremio user named Arthur in a note to the team. “You’ve made my journey in video entertainment much easier. Love you guys.”

Many couples have used Stremio to make their date nights run a little more smoothly. On the app, couples can watch blockbusters from the intimate setting of their own homes. It offers an opportunity to stay in, save money, and still have a wonderful time together.

In 2014, Dimo recognized that the way people sought entertainment was changing. Theaters were out, and video streaming was in. The modern consumer desired the freedom to watch movies and shows on their schedules, and many companies rushed to fill that need.

Netflix, Hulu, Amazon, and an array of other online services began competing for your attention and offering ever-changing playlists of new, classic, and original titles. It became increasingly difficult to keep up with which outlet had which movies and shows, so movie buffs could waste their valuable time searching for a particular title.

“We felt the average user would get overwhelmed,” Dimo said. “There’s an awful lot of content on different platforms, and people needed one platform where you can access everything. That’s where Stremio began.” 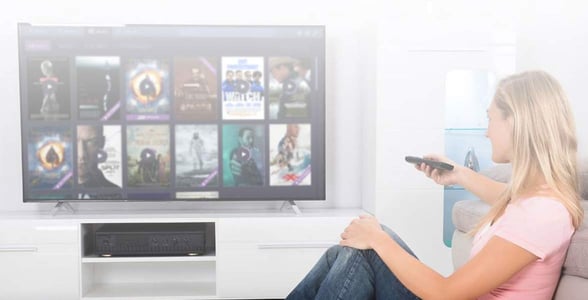 By drawing from third-party sources, Stremio can offer a comprehensive list of movie and show titles.

Stremio’s launch disrupted the entertainment industry by offering an alternative to maintaining multiple memberships and subscriptions across verticals. Just download one app to collect and view it all.

Today, a handful of smart and creative developers work hard to build a consumer-friendly app for movie lovers around the world. Dimo said this international team takes pride in creating a great product that they regularly use to organize their own movie marathons.

“We started Stremio as a hobby,” Dimo explained, “and it turned out to be very useful. Once you have good software, opportunities come to you.”

Stremio: One Platform to Rule Them All

You can skip the lines and crowds at the theater by downloading Stremio and planning a movie date at home. Stremio delivers world-class entertainment options to you by drawing from today’s most popular third-party streaming sources. Now you can watch anything your heart desires without spending hours searching the web.

The comprehensive playlist on Stremio gives you a lot of video content to spice up your date nights. It doesn’t matter if you’re in the mood for a comedy, a documentary, a fantasy, or a good old-fashioned romance, you can find all kinds of movies and TV shows available at a moment’s notice.

“We have everything you like to watch in one app,” Dimo said proudly. “In the future, we’d like to see Stremio growing as a video entertainment tool with a larger scope and more content for our users.”