The Scoop: The Bro App launched in 2015 to recognize that bromances come in all shapes and sizes — and they don’t have to involve the bedroom to be exciting and fulfilling. The Bro App is a wingman for single men seeking friendships, relationships, and casual sex. The social networking and dating app allows users to state their intentions and choose their type, and then it will recommend like-minded bros in the swiping list.

Maybe some single men enjoy diving into the deep end of the gay dating pool as soon as they’re out of the closet. But others would prefer to dip their toes in first and get comfortable chatting with another man before exchanging phone numbers or pics.

Singles who are looking for friendships or platonic relationships can be put off by the highly sexualized profiles and messages on swiping apps. Such fast-paced and sex-positive environments can be overwhelming for newcomers, particularly if they’re still questioning or exploring their sexuality.

The Bro App offers a judgment-free and low-pressure place to mingle with guys.

Scott Kutler, the CEO and Founder of the Bro App, is well aware of this issue because he experienced it for himself when he entered the online dating scene as a bisexual man in 2014. He went looking to make connections with friendly bros, but he found few opportunities to slow down and have a deep conversation on the gay hookup apps that dominated the market.

Scott launched the Bro App in 2015 to help single men who want to bro down without talking about hookups right away. The Bro App supports bromances as well as romances, and it doesn’t pressure guys to define their sexuality.

“I wanted to make a safe space for people who were recently out or not sure of their sexuality,” Scott said in an interview. “Just men looking for other guys.”

The Bro app lets guys run the show in their personal lives and decide what type of bromance they want. Whether they’re looking for a guy friendship, a life-long partner, or casual sex, the Bro App has men’s backs and encourages them to find like-minded dudes in the modern dating world.

Socializing With Men Who Are Gay, Bi & Questioning

The Bro App supports an all-male community where guys are intentional and open-minded. The app asks members to choose what they’re looking for — friends, dates, friends with benefits, chat, and more — and it pairs dudes who are on the same page.

New users must authenticate their profiles by providing a phone number or linking to a social media account. This verification step allows the Bro App to screen out fake profiles.

Single men can select their Bro Type in the app. It offers categories that range from preppy bro to hipster bro. This is a fun way to get to know LGBT guys with a certain look or attitude. 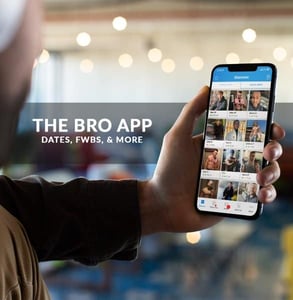 Guys can download the Bro App for free and explore the gay social scene.

Another way the Bro App targets potential matches is by location. The app automatically suggests dating profiles within the user’s region, but it can broaden its scope if the user opts into Travel Mode. This mode can open the door to international romances or travel experiences.

“It’s simple to find a bro,” the Bro App team said. “It’s all about detailed preferences: If you know what you’re looking for, then the Bro App will help you find it.”

Single men can swipe through lists of compatible bros and send a thumbs up or a heart to the guys they like best. When two bros show interest in each other, they create a virtual fist bump and unlock a private chat window where they can talk about their interests, experiences, and goals.

The Bro App doesn’t pressure men to arrange a date or rush into a gay romance. Its casual and friendly atmosphere suits guys who are curious about the gay lifestyle and want to experiment in private.

One thing the Bro App doesn’t not ask men to do is label themselves as a particular sexual orientation. The app leaves this open-ended, so men who are questioning, fluid, or bi-curious aren’t put on the spot. All users on the Bro App are interested in pursuing friendships and relationships with men. And sometimes labels just get in the way.

The App Has Seen Over 1 Million Downloads Since 2015

The Bro App has only been on the market for a few years, but the team has already gotten word about new relationships, engagements, and marriages taking place because of its matchmaking tools. The app has also supported some touching coming-out stories.

Matt K. from Canada said he was bi-curious and looking for friends when he downloaded the Bro App. He didn’t identify has a member of the LGBT community, so he felt more comfortable in this laid-back social atmosphere than on dating apps or gay bars. He found a good friend on the app, and their connection grew into an FWB situation.

As time went on, Matt said he began to experience confusing emotions and realized he was falling in love. That experience led him to date guys more openly and come out of the closet as a bisexual man.

“I needed a space that was more ambiguous, where it didn’t matter what my orientation was,” Matt said. “I needed a place for guys to just connect with other guys and see what happens to find out who I really was inside.” 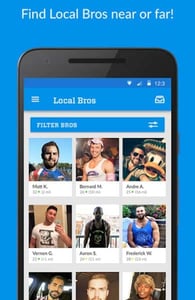 The app has built a global network for men only.

An Iowan single named Tom joined the Bro App in hopes of meeting LGBTQ+ guys without visiting gay bars and clubs. He said he appreciated the app’s Travel Mode because it allowed him to expand his search for a gay friend or date outside his rural state.

“I don’t have to be in a bar with people spilling drinks on me and having music so loud I can’t hear or talk,” Tom said. “I love that now I have opportunities I wouldn’t otherwise have without this app.”

To date, the Bro App has seen over 1 million downloads, and it boasts a 4.7-star rating in the App Store.

“The Bro App is amazing,” Dylan T. said. “This app is clean and organised and has great features. Great app. Five Stars.”

The Bro App has grown primarily through word of mouth as guys see the potential benefits and tell their friends about this new social outlet. Its loyal fans understand the membership base is still growing, and they leave positive reviews to help spread the word.

A Google user called the app “better than Grindr” and gave it an A+ in terms of its features and ease of use. “Will recommend this to all my other Bros,” he said.

“Cool addition to the social networking space,” said Cameron C. in a review. “Will only get better with more users!”

An American military man said he downloaded the Bro App in early 2016 and immediately took to its friendly vibes. He looked for outdoor adventure partners to go on hiking trips, visit distilleries, and explore local sights with him, and then he met a travel buddy who captured his heart.

“We are engaged and couldn’t be happier,” the former Bro App user said. “I wish I could give this more stars. Kudos to the concept, and I hope more start to use it!”

Mainstream gay dating apps tend to encourage casual sexting and no-strings-attached hookups. However, not all bros talk about that life. Some guys are questioning their sexuality or are curious about gay relationships, and they shy away from the gay sex scene.

The Bro App has created an all-male social space where sex doesn’t have to be part of the conversation. Guys can get to know each other in private chats and establish new friendships and relationships according to their comfort level.

“In our fast-paced world, you need a reliable tool to help find friends with benefits, dates, or a long-term bromance with other guys,” the Bro app team said. “Go beyond the hookup apps and let us help you find your perfect guy.”