Bumble revolutionized the mobile dating space when it launched in 2014. Considered the first female-friendly dating app (partly because, for heterosexual matching, only women can initiate messaging), Bumble was founded by American entrepreneur Whitney Wolfe Herd after she left Tinder, which she’s a Co-Founder of. Today, Bumble is known as “the feminist Tinder,” has 22 million users, and is valued at more than $1 billion.

The app does more than find you dates. In 2016, the company launched Bumble BFF, an app for making new friends, and then Bumble Bizz in 2017, which centers on making professional connections. Bumble continues to innovate in 2018 with its project Bumble Hive. For a limited time in major cities across the world, Bumble will open a pop-up where its users can network, meet people, or attend a workshop or panel, among other activities.

At night, the Hive is meant more for socializing. Often there’s food, cocktails, makeover stations, and brand activations, to name a few activities.

Bumble Hive events are free, and you don’t need to make a reservation. However, it is first come, first served, and you need to be over 21 and show your Bumble, Bumble BFF, or Bumble Bizz profile at the door. You can find Bumble Hive program schedules online (here’s an example of the LA one). 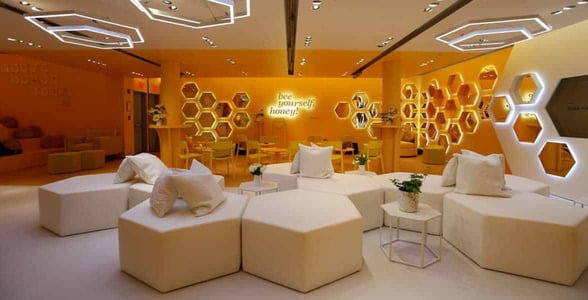 During the day, Bumble Hive is a space where people can network and take classes. At night, people can socialize and go one dates.

Sara and Erin Foster, sisters and Creative Directors of Bumble BFF and Bumble Bizz, said the inspiration behind the Hive comes from Whitney and the team, who wanted new ways to get users interacting.

“Whitney wants to give back to her users who are so loyal, and I think it’s a really interesting way to give back and try to keep them excited and engaged,” Sara said in a WWD article. “We’re going to be constantly looking for ways to bring the Bumble user in. We want people to come to this app, even if they’re not looking for a best friend or a job.”

“I think that Bumble, in general, is just rounding out to be a full 360 app for women covering their professional lives, social lives, and dating lives,” Erin said.

As Whitney told Entrepreneur, “Opportunity starts with a connection,” and Bumble is always coming up with more ways to bring people together — no matter what the reason.

As for the future, we see Bumble becoming not just a leading dating app, but a leading social networking business, with others in the dating industry following in its footsteps. According to the WWD article, a possible next step could be a talk show.

“We’re at a company where it’s just limitless,” Sara said. “Everyone’s really open to everything.”