The Scoop: A 2016 study found that more than 1.4 million people in the U.S. (or about 0.6% of the population) identify as transgender, and it can be hard for singles in that community to find one another and connect. That’s where MyTransgenderCupid.com comes in. The dating site caters to men who are looking to date or find long-term relationships with trans women. MyTransgenderCupid offers transgender people and their admirers a space without judgment, and the team understands the sensitivity behind dating within this growing community.

Those who identify as transgender live through many challenges, which may include feeling uncomfortable in their own bodies and difficulty finding romantic partners. Discrimination is also pervasive, which can force transgender individuals to keep their true selves a secret.

However, societal attitudes are changing. One report found that younger Americans are becoming much more comfortable with alternative gender identification. A government survey showed that 0.6% of the U.S. population, or approximately 1.4 million people, consider themselves transgender.

Even with those numbers — which may be vastly undercounted — it can be hard for members of the transgender community to find romantic partners. Many dating sites and apps can make trans singles feel uncomfortable or unwanted. Not MyTransgenderCupid.com, though.

This dating site has been a popular option for transgender singles since 2015 and is more than just a haven for finding love. MyTransgenderCupid is a place of understanding, fun, and education.

MyTransgenderCupid describes itself as decent and classy, with a focus on helping people connect for long-term relationships. That serves to weed out those who are just curious about transgender dating or who are approaching this dating scene without the best intentions.

For those who are genuinely interested in meeting that special someone, MyTransgenderCupid.com offers an intuitive experience and a safe space for dating in the modern age.

Singles can quickly sign up for an account on MyTransgenderCupid.com for free by answering a few basic questions. The site breaks up users into two categories: trans women and men searching for trans women. The site also has language categories for those living who speak English, Thai, Dutch, French, Spanish, Portuguese, and German.

Once registered, users can upload a photo of themselves and verify their personal information through an email. Then they can browse the profiles of other singles on the site. Every day, more singles — especially transgender women — sign up.

MyTransgenderCupid is also broken up into regions, making it easier to find someone near you. The site includes dating regions for Australia, Canada, the United Kingdom, Europe, and the United States. The transgender dating platform also has a growing following in Asian countries, particularly the Philippines and Thailand.

There is also a special section for people who are looking for “ladyboys,” which is a specific kind of transgender woman who typically lives in — or is from — Thailand.

Visitors can find other daters and plenty of information on MyTransgenderCupid.com.

The site offers a premium tier, too. Free memberships allow users to browse all profiles, send “likes” to members, and add members to your favorites or as friends. They can also play games and read messages from other singles. However, with a paid membership, users can add many more photos, send messages, and also be shown first in the search list. For transgender women, however, the site is always completely free.

“We position ourselves as a high-quality, caring forum for both trans women and men wishing to date them,” reads a post on the site. “We work hard to ensure that your dating experience is straightforward but also pleasurable and successful. Our goal is for you to have the best possible transgender dating experience you can have.”

In many ways, transgender dating is very similar to any other kind of dating. Singles are looking for like-minded people who share the same interests and values, with whom they can have an enjoyable time. Just because a transgender person may not fit into the social norms of gender identity doesn’t mean that they aren’t also looking for romance just like everyone else.

As the transgender community grows and develops with time, so may dating norms. That’s why MyTransgenderCupid.com offers educational resources for visitors. First, they’ll see the faces of many of the site’s members, which can give them an idea of just how attractive transgender women are.

The site also shares plenty of information about how to address people in the transgender community. For one, many prefer the plural pronoun “they,” rather than “he” or “she.” And the site’s members generally prefer to be called transgender women, although sometimes they are referred to as a “T-girl.” These days, the terms “transsexual” and “tranny” have a negative connotation and should be avoided. 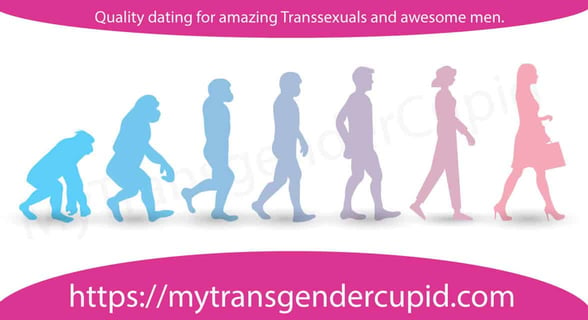 MyTransgenderCupid.com connects users who may feel uncomfortable on other sites.

Along with the “ladyboys” of Thailand, the “transpinay” in the Philippines are also common to the culture. These beautiful trans women have gained fame throughout the world for their soft, kind nature and lovely looks.

Of course, many transgender women have an emotional, gentle way about them — and the site ensures users understand that.

Just because the site caters to certain regions doesn’t mean that it’s not possible to find love from anywhere in the world. Part of the joy of online dating in today’s society is that geographic boundaries are becoming less relevant. If a user finds a potential trans partner from the other side of the globe, they can easily build a long-distance relationship and eventually decide to meet.

MyTransgenderCupid.com: Focused on Safety and Respect

While transgender dating may be growing more common, that doesn’t mean singles can find trans partners on ordinary dating sites. That’s why MyTransgenderCupid.com caters to those daters around the world who know what type of trans relationship they desire.

Its customer service team is always available to help with any concerns, ensuring that safety and respect are important parts of the online dating experience.

The MyTransgenderCupid team also checks profiles manually to ensure that each person is real and not a spammer or scammer. If users encounter a problem on the site, it’s easy to block or report other members for inappropriate behavior.

Additionally, the site’s blog is an an informative resource for finding like-minded singles and is full of first-person accounts of transgender people who found love through the website. The blog covers topics including the best ways to date a trans woman around the holidays and other tricky times. But the writers include conversations about medical journeys and other issues specific to the transgender community.

For example, one blog shares a story from a trans woman who recently went out on a date with a man they met on the site.

“Bill genuinely knew how to empathize with the predicament of any transgender person. He had been a covert supporter of LGBTQI issues and rights for many years,” the author wrote. “During his time as a volunteer advocate for trans rights, Bill came to realize that he was attracted to T-girls but had never quite met the right trans woman.”

The blog ends with the writer in love and finding newfound confidence in her body, and that’s what the team at MyTransgenderCupid.com sets out to accomplish for all of its users.