Editors’ Choice Award: I Love Your Accent™ is a Fast-Growing Dating Site That Appeals to Singles Seeking an International Romance

The Scoop: I Love Your Accent (ILYA) is a borderless dating site where singles can explore a world of romantic possibilities. The site currently has over 55,000 members, all of whom have been verified as authentic, and its organic growth is all thanks to the undeniable appeal of a foreign accent and an international romance. Singles from the U.S., the U.K., Australia, and other nations have created dating profiles on I Love Your Accent to expand their horizons and see if love is waiting for them on a distant shore.

Prince Harry was one of the most eligible bachelors in the world before American actress Meghan Markle snapped him up. A mutual friend introduced them in July 2016, and Harry says he knew Meghan was the one for him on their very first date.

In November 2017, Harry proposed to Meghan, and she said yes. Over the years, Megan and Harry’s whirlwind romance and cross-cultural relationship have made headlines for many reasons, and they have inspired people around the world to go after their own happily-ever-after love stories. 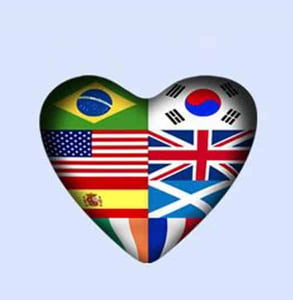 I Love Your Accent brings online daters from the U.S. and the U.K. together.

When Meghan and Harry’s engagement was announced, I Love Your Accent (ILYA) saw a huge spike in its membership. This independent dating site was designed to introduce American singles to British singles, and it now welcomes anyone seeking an international relationship or a date with an accent.

Rochelle Peachey founded I Love Your Accent in 2012 because she said she realized many Americans have an affinity for British people — and vice versa. Rochelle is British, but she lives and works in the U.S. She told us she still hears people say “I love your accent” all the time.

No matter how you pronounce it, I Love Your Accent can help you expand your search for love by introducing you to date prospects who may never have crossed your path otherwise.

Over 55,000 Genuine Members Have Signed Up

Registering an account on I Love Your Accent is free and takes less than five minutes. The dating site sticks to the basics and doesn’t overcomplicate online dating with a lot of unnecessary features. Just choose a username and password, and then fill in your name, location, date of birth, sex, and email, and you’re good to go.

ILYA has optional profile fields, including marital status, education, income, and accent, but these aren’t necessary to complete the signup process.

Once the profile is approved, singles can use the search filters, view profiles, and send flirts online. Only paid subscribers can read and send messages on I Love Your Accent, thus ensuring a safe and respectful environment for all involved.

“You can be a standard member on my site forever, but you’re not going to get very far because you can’t send messages,” Rochelle said. “If you see someone you like, it’s worth taking that step to get in touch.” 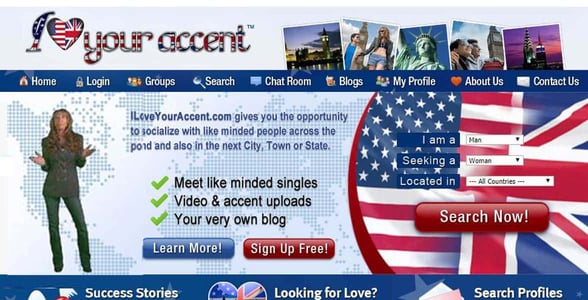 I Love Your Accent is a straightforward dating site with social chat rooms, groups, and blogs.

As an international dating site, ILYA supports singles who hail from nations big and small. Its members may come from different cultures, but they share a worldly outlook on love. A good chunk of ILYA members live in the U.K. — but they’re willing to relocate for the right person.

Rochelle said the couples who make it on I Love Your Accent often do so because they’re open to moving to another country and turning the long-distance relationship into something real.

Over the years, I Love Your Accent has grown primarily through word of mouth. Rochelle is proud to maintain a dating site where every dating profile is genuine. The dating site currently has over 55,000 members, and it’s still growing. In the coming months, Rochelle plans to unveil an ILYA app for iOS and Android users.

“I want I Love Your Accent to grow,” Rochelle said. “I want more and more people to hear about it, but, at the same time, because we’re small I can be more active and helpful on the site.”

The Team Takes a Hands-On Approach to Love

As a dating site owner, Rochelle is hands-on. Anyone can contact her via email and get her honest advice, recommendations, and assistance. She has written testimonials for couples dealing with immigration red tape, and she has sent flowers to couples getting married.

Rochelle acts as a pseudo matchmaker and dating coach on I Love Your Accent by helping members through the process in any way she can. She has edited dating profiles, given online dating tips, and even intervened on behalf of a member and encouraged someone not to let a good match slip away.

Rochelle has been researching, observing, and writing about online dating for years, and she has a lot of good advice for newcomers to the scene.

“ILoveYourAccent.com can act as your new foreign friend. Join the forums and talk about life, love, hopes, and dreams.” — Rochelle Peachey, ILYA Founder

ILYA’s relatively small size also means Rochelle and her team can easily spot fake profiles and unsavory characters online. The moderators don’t hesitate to remove suspicious members from the database. Authenticity is important to I Love Your Accent because so many people come here seeking long-term relationships and love.

Success Stories From Couples Who Made It Work

I Love Your Accent is on a mission to inspire relationships between people who come from two different worlds. Its happy couples overcome these differences to create a future together. This may sound like something you’d see in a romantic comedy movie, but it’s the real-life love story for many couples who took a chance on this international dating site. 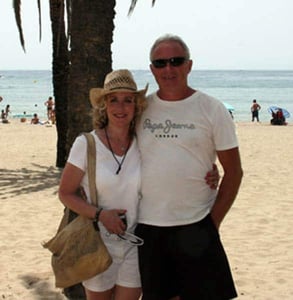 Rick lives in Spain, and Leslie lives in New York. But that didn’t stop them from meeting on ILYA.

Many couples have written to Rochelle to give her updates about their relationships and families. One couple even said they named their daughter Ilya, in honor of the dating site where her parents met.

“I just love it,” Rochelle said. “I’ve been to some weddings, and I get invited to more than I can attend. It’s just wonderful.”

Rochelle told us one of her favorite success stories involved an American photographer and a British writer. The American woman joined I Love Your Accent on a whim and met a single man who was in the States on business. They hit it off immediately. He was only supposed to stay for a month, but he extended his trip to six weeks, and then she went back to England with him and has been there ever since.

Their love story is one of many success stories highlighted on I Love Your Accent. Since launching, the dating site has helped countless couples bridge distances of thousands of miles and find common ground in their love for one another.

“My husband and I thank you from the bottom of our hearts,” said Cheryl and Martin in a testimonial. “Without you and your site, we would never have found each other.”

“This site has been a Godsend for me,” said Kelly, who lives in Orlando, Florida. “I met a wonderful man from England, and we are now married.”

I Love Your Accent™ is a Place for Happily Ever Afters

Looking for the Meghan to your Harry (or vice versa)? I Love Your Accent could bring you one step closer to an international romance and fairy-tale wedding. As a far-reaching and fast-growing dating site, I Love Your Accent can match people across borders and help them overcome vast distances in the name of love.

While an accent may spark an initial attraction, singles often find a lot more to love in this quality-driven membership base. ILYA gives people the chance to broaden their horizons and expand their dating pool to include dates from around the world.

An online dating membership isn’t a sure thing, but Rochelle encourages ILYA members to stay positive, be courteous, and take action on the dating site if they want to make something happen.

“It’s a numbers game, isn’t it? You have to keep trying,” she said. “You’ll never win the lottery if you never buy a ticket. So, why not send a little flirt out and test the waters. You’ve really got nothing to lose.”