The Scoop: The Mei app has been called “the anti-dating app” because it uses a wealth of data to go a step beyond dating and strengthen text relationships. The Crushh features within the Mei app analyzes texting habits and delivers actionable insights to users around the world. If you’re single and wondering how to interpret your crush’s texts, you can rely on the Crushh and Mei team to provide in-depth analysis that brings clarity to personal conversations.

Sometimes it’s hard to get a read on another person via text. Does she use smiley emojis to flirt — or is she just being polite? Is he normally slow to respond to his texts — or is he not that into you? These types of subtle miscommunications happen all the time in the dating scene, and they can cause a lot of heartache and confusion. 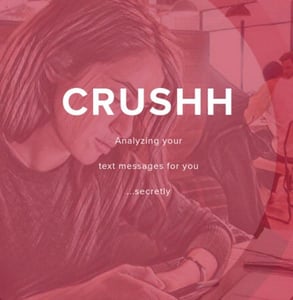 Crushh features within the Mei app provides insights on how people communicate via text.

Es Lee is a tech entrepreneur who saw his friends struggling to interpret text signals and decided to develop a solution. The Crushh app launched in 2017 to bring clarity to the texting world through analyzing texts and measuring people’s engagement and interest in conversation. Its technology was later incorporated into the Mei app which made its debut in the Google Play Store in 2018.

The Crushh algorithms crunch the numbers to find answers to the most pressing questions in text conversations. Its ratings can tell users if someone is crushing on them or if they’re on their way to being ghosted. Crushh studies conversational patterns to draw sound conclusions on text relationships.

“We look at how quickly someone responds, how often they initiate, how often they send pictures or emojis, and other data points,” said Es. “All these things are kind of like the body language of text messages. You can learn a lot about your text relationship by observing them.”

The AI Can Help You Read Between the Lines

Texting is a new medium for relationship building, and it doesn’t always lend itself to clear communication. Everyone has different texting styles, and sometimes even good friends have trouble deciphering the mood and meaning behind a text message or emoji.

That’s where Mei comes in. The AI creates personality profiles based on your contacts’ texting habits and offers valuable information about how the conversation is going.

Mei can analyze two types of relationships — romantic and professional — to let users know where they stand with one another and what they can do to send the right message. For instance, if the other person initiates conversation more than you do, the AI may suggest you say hello or ask a question more frequently.

“With enough data, we can get smarter about how we text,” Es said. “We’ve shifted from Crushh to Mei to focus more on personality differences in texting. Crushh is a counting tool, while Mei uses AI to figure things out.”

Mei on Android is a complete messaging app that offers SMS (texting) and encrypted rich communication services as well as advice insights about text conversations based on custom data analysis. The Mei iPhone application is a slimmed down app that can only analyze Whatsapp chats. It has a four-star rating with many users saying they learned a lot about themselves and their texting buddies from the app.

“It gives you a percentage of likelihood of a crush, and one sentence describing that person,” said one Mei user. “I only tested on one conversation, but it would be interesting to try on different people.”

“Very intelligent,” another user commented. “This app really does know what you’re thinking.”

Mei’s AI function is optional, so users don’t have to turn it on when using the app to text their friends, family members, or online crushes. The messaging app’s analysis is an add-on feature that can offer greater insights when it comes to communications, but it isn’t forced on any user.

Es said the team takes user privacy seriously and doesn’t even ask for a person’s name when they sign up. Mei is a discreet AI service that only collects data with the user’s permission, and it doesn’t share or sell that information with any third-party company.

Due to changes in Play Store policies, Google removed the Crushh app from its store in 2019, so the algorithms could only live on Mei. Another set of policy revisions now threatens all the AI services in Mei’s Play Store app. Es commented, “We understand the need for platforms to protect users from unwanted use of their data, but it should be the choice of the user. When users download apps to access technology, give their explicit consent, yet are still barred from it — there is a very real potential stifle innovation.”

Crushh and Mei have used a learning algorithm to put valuable information in the hands of everyday texters and empower them to take action based on personal insights. It can tell a single person if a romantic chat is going well, and it can help them identify the signs of mutual attractions

“Having Mei is generally good for text relationships,” Es said. “It’s particularly useful for people who maybe aren’t familiar with this form of communication.”

While many Mei users are tech natives in their 20s and 30s, Es said he’s noticed the app has earned a strong following among people in their 40s and older. These individuals may not understand new texting norms or the subtle meanings of emojis, so it helps them to have Mei cut through the noise and deliver data-driven interpretations of what people are saying. 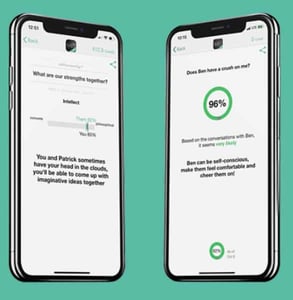 Mei can estimate which texter likes the other one more based on conversation response times and message lengths.

“Our models are based on personality factors, including age, extroversion, and agreeableness,” Es explained. “Just from studying the emojis you use, the AI can have a good understanding of how old you are.”

The team has pursued this technology with hopes that it’ll become the default for online conversations everywhere. Its white-label service can upgrade the chat features of a dating app by providing romantic interest ratings, and it can also increase engagement on social platforms.

“My teenage self thinks this app is a godsend,” said Olivia Solon in The Guardian. “Finally, I can know with scientific accuracy how much my crush is into me.”

Es said he sees a lot of potential in the Mei algorithm, and he continually solicits feedback from users to get a better idea of how it can improve or what questions it can answer.

“We’re a small team from a range of backgrounds, and I think we move faster because we have the benefit of not knowing better,” Es said. “We put together the first set of AI functions and then threw it to our users to tell us what they would like.”

Early on, users asked the team for more tools geared toward self-analysis, so Mei now has a self-reporting tool that an individual can use to describe his or her mood and make a note about what’s going on that day. This feature has proven to be a good way to check in with people and foster good mental health.

Mei observes user behavior and offers guidance to help them better understand their social patterns and communication habits. The app can even intervene if a user shows signs of being depressed or in crisis, and it can prompt people to connect with their loved ones in more meaningful ways. Through its personality profiling, the AI is able to find a contact who exhibits traits like sympathy and altruism that would make them a good person for the user to reach out to for help.

Mainstream dating apps and sites put a lot of effort into introducing singles to one another, but that’s often where the assistance ends. The Crushh and Mei team has created an AI wingman to help people who want to up their texting game and form closer relationships one message at a time.

Mei uses texting data to calculate the odds that another person has a crush on you and provide recommendations to increase engagement. Its insights empower singles to make informed decisions about which conversations to pursue and which love interests have real-life potential.

“Our app works on the quality of the relationship,” Es told us. “Daters will be able to get the information they need to act, saving themselves a bunch of time if they’re talking to someone who’s not looking for the same things.”