Since it launched in 2014, Bumble has set a high standard for online daters. Whitney Wolfe Herd left Tinder to found a dating app that empowered women to take control of their love lives. She famously decided to make female users the only ones who can make the first move (that is, send a first message) in heterosexual matches on the app.

Many singles wonder if Bumble is a dating app, a friendship app, a hookup app, and the truth is that online daters use it for all types of meaningful connections — where women take the lead.

Now Bumble has picked up steam and earned a reputation as a female-friendly dating app. In fact, the groundbreaking dating company recently released a survey highlighting the quality of its users, who identify as more interested in finding long-term relationships than casual sex.

“Female Bumble users are empowered and ready to make the first move,” said Jess Carbino, Bumble’s in-house sociologist. “These women have established careers, experienced love, had families, and know what they want in their next relationship.”

Over 100 million people have joined Bumble to see what its innovative matching and communication tools can do. To put that in perspective, that’s four times larger than the population of Australia. What’s more, over 10% of its users pay for Bumble’s monthly subscription, which costs $9.99, and only 5% of users pay for the Tinder app. Bumble prides itself on the quality of its membership base, and it has some impressive numbers to back them up.

Bumble conducted an internal survey to check in with its users and see where their heads are at. The results have validated the online dating app’s underlying theory that putting women in control of the dating experience leads to more meaningful interactions.

Around 85% of users said they’re on the app because they’re “looking for marriage or a boyfriend/girlfriend.” That’s a huge chunk of the membership. Granted, the survey is reliant on them honestly reporting their goals, but Bumble is nonetheless thrilled to serve a predominantly relationship-minded audience. 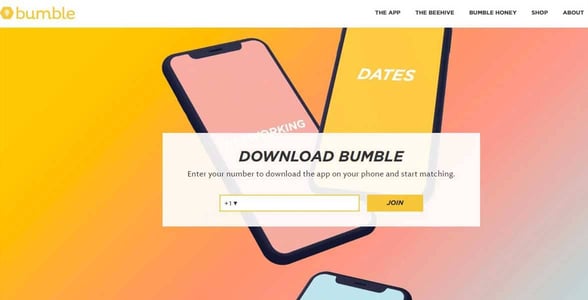 A survey of Bumble users showed a majority of people use the app to find a serious relationship.

Bumble has touted its recent study as proof that quality will attract quality. Less than 4% of men and less than 1% of women on the app said they’re just looking for a hookup. That paints a pretty clear picture about the intent of users on Bumble. It has cornered the market in the relationship-oriented dating scene, at least when it comes to mobile dating.

Bumble also found encouraging evidence that the app is successfully leading singles to meet in real life. In its survey, over 25% of users said they had gone on a first date with someone they met on Bumble in the last month.

The Dating App That Puts Women in the Driver’s Seat

Bumble may boast about the quality of its users, but it’s important to look at what the users themselves say, too. Over 160,000 users have reviewed Bumble on Google Play, and it has a 3.9 rating overall. Some people rave about the dating app, while others give it one star and say they were disappointed by their Bumble swiping experience.

However, if you look at Bumble’s success stories page, it’s nothing but positive reviews and happy users. Sirish and Kunal matched with one another in November 2015, and, after a few admittedly awkward exchanges, they went out on a date at Wicker Park’s Pub Royale in Chicago and fell for one another.

“The date went above and beyond my expectations,” said Sirisha. “It was like spending the night with one of my best friends.” They’re now happily married.

Kerry and Randy also found love on Bumble. Kerry said her niece pushed her to join the app two years ago, and she soon went on a coffee date with the guy for her. “Easy, great conversation,” she said. “We really enjoy each other’s company. We laughed a lot.”

“When I first saw Christina on Bumble, I thought it was too good to be true! Her smile and eyes drew me in.” — Amanda, a user who met her girlfriend on Bumble

Beta Peki said Bumble is “one of the best apps because ladies are the ones [who] go first for messaging.” She added that the unique messaging system puts single women in the driver’s seat when it comes to choosing romantic partners.

“Women can feel safe, and men [do] not have to worry about initiating every convo,” said another user on Google Play. “This is the only dating app I use.”

Because of its feminist mission, Bumble has attracted a user base of high-quality singles — and effectively deterred the playboys and sex seekers who are looking for an easy lay. The Bumble app survey speaks to its popularity among relationship-minded daters. Bumble has made a name for itself by countering conventional notions about dating, and now it’s pushing back against the perception that location-based dating apps are only good for hookups.

Bumble has positioned itself in the online dating market as a friendly place where real people can find true companionship based on mutual interests and shared values. According to Bumble’s website, “We prioritize kindness and respect, providing a safe online community for users to build new relationships.”

In the past year, Bumble has doubled down on its mission to build lasting connections by launching Bumble Bizz and Bumble BFF which use the swiping technology of traditional dating apps to help adults form business relationships and make new friends. From the dating world to the social scene, Bumble empowers quality individuals to build connections — one swipe at a time.