The Scoop: Being vegan or vegetarian is often about more than dietary preferences and can reflect a person’s core beliefs, and many may not find themselves romantically attracted to those who don’t share their lifestyle. FindVegLove caters to those singles through its regular speed dating events throughout the United States and Canada. The company’s owner Karine Charbonneau has also recently started a matchmaking service exclusively for vegan and vegetarian singles. When her clients already know that they’re meeting someone who shares a common bond, they can start getting to know one another with less pressure and more peace of mind.

Think about your ideal date. It may start at a restaurant that you and your partner enjoy, where you order an entrée, a glass of wine, and finish the meal with dessert to share.

Many dates revolve around food, and people spend plenty of time each day thinking about what they’re going to eat. For those who adhere to specific diets, they may prefer to share a meal with someone who has similar tastes and beliefs. 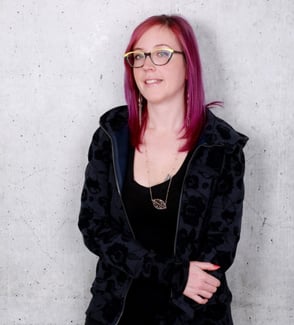 Find VegLove Founder Karine Charbonneau understands the importance of finding a partner who shares a vegan or vegetarian lifestyle.

Being a vegan or vegetarian is typically about more than what you eat. Many vegans and vegetarians not only choose their diets because they disagree with killing animals, but also because they believe that the diet is better for their health and the planet.

That was a need that Karine Charbonneau, owner of FindVegLove, understood. As a vegan herself, she knew how eating practices can become cornerstones of our life.

“Veganism and vegetarianism are whole lifestyles,” she said. “Dating a meat-eater can be a deal-breaker for many people.”

That’s why Karine began hosting speed dating events specifically for vegans and vegetarians. The profile of those events grew so quickly that she now hosts them all over the United States and Canada.

After a few prosperous years of speed dating events, Karine decided to start a matchmaking service for the same demographic.

Now, she focuses on pairing vegans and vegetarians who have compatible lifestyles, but who also share other common interests.

An Extensive Database of Vegan and Vegetarian Clients

She’d already accumulated information from vegans and vegetarians from around the country through her events, so Karine agreed. She consulted her database to find compatible matches, spoke with a few singles, and made recommendations for dates.

Karine’s client was so happy with her services that she decided to expand her business into matchmaking. She officially launched the new service in May 2019 and said she is the only vegan matchmaker in North America.

“People are going crazy over it. There’s been a great response,” she said.

If singles are interested in Karine’s matchmaking services, they first reach out to her to determine if they work well together.

Once Karine takes on a client, she guarantees at least six matches in a year. She interviews potential partners before setting up a date; she’ll never pair people without first determining their compatibility.

“I will get to know the person first to see if they’re a good match for my clients before presenting them,” she adds.

Often, Karine doesn’t show photos of a person’s potential matches. This way, they can connect on a different level, rather than just physically.

If a client meets a partner, they can freeze their account for up to six months.

Most clients are either previous event attendees or those who sought Karine’s help because they heard about her success. She welcomes all interested clients to join her database if they would like to be matched.

And Karine’s clientele runs the gamut. She works with vegans and vegetarians who live in the United States and Canada, and even those interested in meeting partners who live outside of their home cities. Those singles typically range in age from 32 to 64.

Karine said she understands why so many vegans and vegetarians are excited about her new matchmaking service.

“They like that they’re introduced to someone who they may never have come in contact with,” she told us.

One happy client said: “Karine is the best! After nearly two decades of dating and being frustrated at how hard it was to meet veg men, I was thrilled when I came across Karine’s matchmaking services. She listens well to understand my needs, and every match she has found for me is a good human being who shares my values and interests. I wish I had found Karine sooner — it would have saved me so much time and stress.”

Understanding the Importance of Finding a Partner With Similar Beliefs

According to a recent survey, one of the biggest reasons why married adults think their relationships are successful is that they have shared interests. Other significant indicators include shared religious beliefs and agreement on politics.

While veganism isn’t a religious or political belief system, there may be a correlation between a vegan lifestyle and other beliefs.

Karine sees the importance of connecting people with a shared commitment to vegan and vegetarian lifestyles. She continues to coordinate speed dating events in major cities to build up the community in North America.

The events take place approximately every three months in many North American cities, and most two-hour events attract between 14 and 30 vegans and vegetarians.

Karine’s first event was in 2011, and, after the December events in 2019, she’s hitting “pause” so she can focus all her time and energy into Veg Matchmaking.

“I’m not saying I’ll never do another event again. I’m not closing any doors,” Karine said. “I will still continue my passion of helping veg singles find each other, but via my matchmaking instead of events.”

In addition to the speed dating events and matchmaking, Karine also plans to connect with vegans and vegetarians in other ways.

“I’m working on more blogs and videos that are all veg-focused. Recently, I did something called Veg Love Week with video interviews of different experts,” she said.

Karine is also set to publish an ebook that includes advice on what else to look for in a vegan or vegetarian partner. She said she has discovered that sometimes her clients are so excited to meet another vegan or vegetarian single that they overlook other less-than-desirable qualities.

She selects topics to cover through conversations with vegans and vegetarians she meets in her daily life, on her Facebook group, or through the speed dating events.

“People tell me what they’re struggling with, and that’s where I get a lot of my inspiration. I ask them what dating has been like for them,” she told us.

In addition, Karine is putting together an eight-week dating course that will launch the first week of January 2020.

FindVegLove is Building a Niche Community of Singles

From the beginning, Karine suspected her matchmaking venture would be successful. She’d met so many people through her speed dating events that she already had a good idea of what they wanted — and an extensive contact list.

“I talk to so many vegan singles, and they tell me how much of a struggle it is to find someone,” she said.

Karine has a number of matchmaking clients under her belt, and demand is growing. Her reputation has spread by word of mouth from clients who find the process less stressful than meeting other vegans and vegetarians through normal social channels. She’s taking on a small number of clients at a time so she can give them personalized attention.

“I’m the only vegan matchmaker I know of, which is amazing. It was something I wanted to do for a long time, and I’m so glad I’m getting to live my passion,” she told us.