11 Marriage Trends by Generation & What They Mean for the Industry

Note: There are four distinct generations that we’ll focus on in this article. The Silent Generation, or traditionalists, as some people call them, are those born between 1925 and 1942. The baby boomers were born between 1943 and 1964, while Generation Xers are people born between 1965 and 1979.Finally, millennials are men and women born between 1980 and 2000.

As of 2014, 27% of millennials are married and 59% are single and never married, according to Gallup. In comparison, 36% of Gen Xers, 28% of baby boomers, and 65% of traditionalists were married when they were the age that millennials are now.

However, a majority of millennials want to get married but haven’t yet because they haven’t met the right person, are focusing on their career and/or themselves, or don’t have the money, among other reasons. When they do get married, most likely it happens when they’re older (e.g., late 30s). Gallup reports that only 20% of Americans between 18 and 30 are married vs. 32% of Gen Xers and 40% of baby boomers when they were that age.

Another fact that may go hand in hand with millennials getting married at lower rates could be that 36% of them are living in multi-adult households with three or more people (vs. 27% of Gen Xers, 29% of baby boomers, and 14% of traditionalists in that living arrangement).

2. Which Could Contribute to Declining Divorce Rates

Divorce rates have been declining for decades now, and many researchers have suggested this could be linked to 20- and 30-somethings waiting longer to get married, specifically, because of cohabitation (more on that in the next section).

“Overall our findings provide strong support for the theory that living with a partner before marriage decreases the risk of separation in more recent marriages,” said Belinda Hewitt, of the University of Queensland, and David De Vaus, of La Trobe University.

More than 22% of millennials and 21% of Gen Xers are on a dating site and/or app. On the flip side, about 13% of baby boomers and 3% of traditionalists are meeting people this way. Recent numbers show that 37% of relationships and marriages begin online, and those couples are more likely to have happier marriages and are less likely to divorce. Maybe the younger generations have got it right.

Most millennials (85%) say they would marry someone of a different race (African-Americans, Asian-Americans, Hispanic-Americans, and Caucasian). The likelihood of interracial marriage among other generations, according to the survey, revealed the following results: 73% of 30- to 49-year-olds, 55% of 50- to 64-year-olds, and 38% of those 65+ agree. 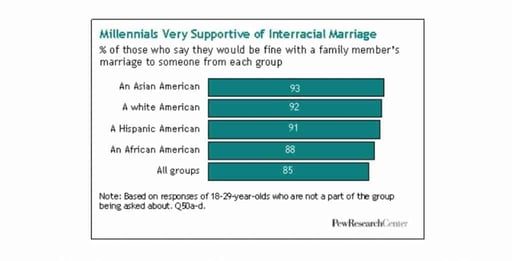 More than 80% of millennials said they would marry someone of a different race, according to the Pew Research Center.

Similar results were found when asked about interfaith marriages. Among Americans who’ve been married since 2010, 39% have a spouse of a different faith compared with 19% of Americans who married before 1960.

5. Premarital Sex Isn’t That Big of a Deal to Millennials

6. Unlike Other Generations, Millennial Couples Prefer to Live Together Before Marriage

As we mentioned above, cohabitation may play more of a role in people’s lives than it used to. According to Bowling Green State University, 64% of millennials and Gen Xers think living with someone before getting married could help prevent divorce. 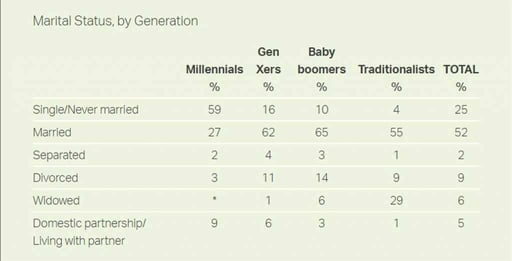 Approximately, 64% of millennials believe cohabitating with a partner before marriage could help prevent divorce later on.

That same Gallup study suggests that millennials are the biggest fans of this alternative to marriage, as 9% of them are currently in a domestic partnership or are living with a partner compared with 6% of Gen Xers, 3% of baby boomers, and 1% of traditionalists.

7. Older Generations Worry About These Trends

A Pew Social Trends survey reveals that older people have concerns about these emerging arrangements more so than younger people do. This includes couples living together before marriage, putting marriage off for a long time or for good, and raising children without being married — not to mention single women having children on their own. Pew Social Trends also found that conservatives, religious people, and Caucasians are more likely to disapprove of these behaviors.

More than half of 18- to 29-year-olds surveyed by Pew Social Trends said being a good parent is one of the most important things in life — compared with 30% of those who said the same about marriage.

About 52% of millennials say being a good parent is very important.

Millennials are also less likely to say a child needs both a father and mother to grow up happy and that single parenthood or unmarried parenthood are “bad for society.”

Not only are perceptions on relationships changing, ideas on traditional gender roles are, too. Fifty years ago, mothers were the sole or primary source of income in only one out of 10 households with children under 18. Today, it’s four in 10, according to Pew Social Trends. “Breadwinner moms” are made up of married moms (37%) and single moms (63%).

In relation to this statistic, dads are taking on more of the housework and child care. In 1965, 6.5% of fathers were helping around the house and with the care of children. In 2011, that number stood at 17%.

10. Baby Boomers are More Likely to Have Extramarital Sex

People born between 1940 and 1959 report the highest rates of extramarital sex. Alternatively, 14% of younger Americans (54 and under) have had sex with someone who isn’t their husband or wife, while 20% of older Americans (55+) have. Sociologist Nicholas Wolfinger said, “Perhaps some people do become more likely to have outside sex partners as they age, but only if they grew up during the sexual revolution of the 1960s and 1970s.”

However, Business Insider noted: “Things get tricky when you start trying to explain this phenomenon. It can’t be simply that older people are having more extramarital sex simply because they’ve been married for longer — because up until 2004, older Americans were straying less.”

11. People are Getting Remarried More Often

Thoughts for the Dating Industry: Match for Other Types of Connections & Target Seniors More

Just because millennials and later generations aren’t getting married as quickly as past generations doesn’t necessarily mean dating platforms should start marketing more for hookups. As we talked about earlier in the article, younger people are interested in marriage and parenthood — just not at this time in their lives.

We’d suggest dating platforms market themselves for other types of connections as well as the romantic kind. In fact, a lot of platforms are already helping match people for friendship and networking, including Bumble, Skout, and MeetMe. On these sites and apps, if members decide they’re interested in dating, they always have the option to search for it.

Another thing dating platforms may want to consider is marketing more toward seniors if they’re not already doing so. With only 13% of baby boomers and 3% of traditionalists currently on a dating platform, there’s a massive audience that’s worth pursuing. Plus, interest in online and mobile dating is increasing among these ages groups — 12% of 55- to 64-year-olds have used a dating site or app, but only 6% reported doing so in 2013.