The Scoop: Elect Club is a sophisticated UK matchmaking firm that uses the power of events to bring people together. Since 2005, the company has wowed singles with invitation-only dinners and parties designed to facilitate conversation. Now Elect Club’s CEO, Genevieve Zawada, has teamed up with Dr. Angela Smith, a clinical psychologist, to create events that will do even more to support and empower singles everywhere. They launched Love Retreats to transform how people view themselves and their dating prospects. Together, the dating professionals run workshops that show singles how cultivating an aura of self-love can positively influence every area of their lives.

The daily grind can be punishing on singles, slowly draining their sense of self-worth and taxing their will to date. That’s why self-care has become an area of focus for leading professionals in the dating industry. By encouraging singles to do the inner work, matchmakers and dating coaches can effectively change someone’s outlook and get them feeling ready and excited to go on dates.

Genevieve Zawada, an esteemed matchmaker in the UK, has recently taken on the issue of self-care by hosting rejuvenating retreats for single women, single men, and couples. These Love Retreats complement Elect Club’s matchmaking and coaching packages and offer singles yet another positive and impactful resource to support them on the dating journeys. 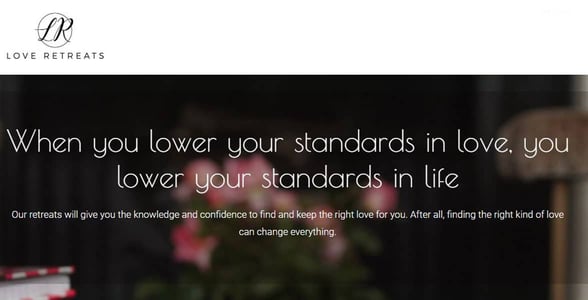 Love Retreats welcomes anyone in need of a little TLC and guidance as they make their journey to love.

The moment participants arrive at the retreat, they can drop their baggage (literal and metaphorical) and relax. Genevieve has partnered with a clinical psychologist named Dr. Angela Smith to ensure the weekend offers healing insights as well as practical guidance and support. Plus, the serene and beautiful location of the retreats takes people out of the everyday and invites them to look at life and love from an entirely new perspective.

Genevieve and Angela hosted the first retreat in the Dominican Republic alongside the Matchmaking Institute. This event catered to matchmakers who needed a little me-time to help them center themselves and become more effective mentors for others. The retreat was a resounding success, and now the Love Retreats team plans to host three or four retreats a year, depending on demand. So far, they have hosted two events in the UK and one internationally.

These dating experts have taken a comprehensive approach to dating and have taught individuals how to believe in themselves, practice self-love, and pursue their life goals with confidence and courage. By tackling a person’s past, present, and future, Genevieve and Angela have made a difference in many people’s lives.

“It’s very uplifting,” Genevieve said. “We want people to embrace the experience and focus on letting go. We’re here because we want to move forward, but you have to be ready to do the work because you can’t create your future until you’ve put your past to bed.”

Bringing Together 40 Years of Professional Expertise

Angela spent over 20 years working as a behavioral psychologist specializing in personality disorders before she began working with Genevieve. As part of her job, Angela diagnosed psychopaths and sociopaths sitting across from her week in and week out. It was grueling to work with these people, and she didn’t feel satisfied with her ability to improve lives and positively impact people.

Genevieve and Angela work together to create therapies that replenish the spirit.

So, on New Year’s Eve, she made a resolution to change careers and stop working with psychopaths. She wanted to find a way to share her knowledge with ordinary men and women in need of a little mindfulness in their lives. It turned out Angela’s timing was perfect.

A matchmaker named Paul C. Brunson introduced her to Genevieve, who also wanted to branch out from matchmaking and provide a holistic coaching program for singles. The two women put their heads together and devised a way to use their combined 40 years of professional experience to change hearts and minds around the world.

Genevieve said their combined skills complemented each other perfectly, and they soon had mapped out a powerful weekend retreat packed with therapies that addresses issues in the mind, body, and spirit. Clients can also benefit from Genevieve’s matchmaking prowess and the Elect Club network, which fast-tracks them into a loving relationship.

“We’ve put together an incredible program that just works,” she said. “The results have been phenomenal.”

The Three-Day Program Deals With the Past, Present & Future

Genevieve and Angela host all-inclusive boot camps throughout the year to inspire and motivate daters from all walks of life. The Love Retreats have seen a good mix of people, ranging in age from early 20s to late 50s. The weekend creates a sense of camraderie as people build each other up and share their experiences in teachable moments. Angela said they take care to pair up roommates who can learn from one another’s strengths. They might put a confident and talkative 50-something next to a shy and insecure 30-something, for instance, so the two of them can see dating from a new point of view.

The luxurious surroundings of the Love Retreats set the tone for the transformative event.

The first day of the Love Retreats is all about reflecting on one’s dating history. They have people write a letter about their unresolved feelings or persistent fears. They can address the letter to an ex, a family member, a friend, or even themselves. Then they take a long walk on their own to think about the experiences they haven’t quite let go of.

That night, after dinner, the group comes together in a fire ceremony to burn their letters and get closure. “There’s tears, and there’s tantrums,” Angela said, “but it’s a way forward.”

That first day puts the past to bed, and then the next day is all about maximizing the present. The retreat prompts individuals to think about who they are and what they want. Angela spends deep-diving workshops guiding participants to understand their dating patterns and emotional blockages so they can make better decisions throughout their lives.

This day also includes group feedback sessions called Looking in the Mirror. During this session, the participants talk about each other’s images and offer constructive suggestions on how to make sure they’re representing themselves in the best possible light.

Genevieve said she also spends some time discussing dating strategies and talking about how to identify red flags early on. Together, the matchmaker and participants create an action plan for attracting and cultivating healthy relationships in the future. On the last morning of the retreat, Genevieve and Angela review the weekend’s big takeaways and encourage attendees to stick with the goals they’ve set and remember everything they’ve learned together.

After the retreat, participants join a Whatsapp group so they can feel in touch and hold each other accountable. Genevieve said women will often post pictures of themselves about to go on a date, and others will give them plenty of compliments and encouragement. This support group offers retreat participants a way to hold themselves accountable to making positive changes and keep in touch with the new friends they’ve made during the retreat. Some Whatsapp groups have already begun talking about going on another retreat together.

“We get them to view dating from the inside out, so they understand their dating patterns and their family patterns and can make different choices in the future,” Angela said.

When Love Retreat participants are open to change and ready to do the work, they often see incredible results in a short period of time. Genevieve and Angela have seen it time and time again. They told us a story about one woman who was hiding her curves because she felt self-conscious about her body. The retreat’s Look in the Mirror session gave her the feedback she needed to try a more feminine and flattering look.

Another woman realized how her family strife was holding her back in the dating world because she couldn’t move forward with all that negativity above her head. The Love Retreat workshops helped her address and deal with these issues.

Genevieve said she contacted eight women after one retreat and asked for their testimonials. All eight women sent back not just one but two testimonials gushing about the experience and the difference it has made in their personal lives.

“Before I came on the retreat, I thought there was something wrong with me, and that it was just bad luck I was choosing and staying with the wrong men,” said J., a Love Retreats attendee. During the retreat, she learned to take ownership of her dating choices and become a more conscientious and self-confident dater.

“I altered my perception of relationships, so I can now go on to have a healthy relationship.” — M., a Love Retreats participant

“People need to be educated on dating and love patterns because you don’t learn about it,” said another retreat participant. “What I experienced was a paradigm shift that was life changing.”

“I learned not to blame myself for everything,” said M., who said the retreat changed how she perceived dating and relationships. “I can now go on to have a healthy relationship.”

Working with Genevieve and Angela can help people come out of their shells and reflect on how their actions affect their love lives. The goal of Love Retreats is to inspire such breakthroughs and give daters the resources and the support network they need to change.

The Love Retreats give people a chance to examine themselves and their troubles from a fresh perspective. The weekend’s holistic therapies tackle the past, present, and future, so attendees walk away feeling empowered to find love. Surrounded by a beautiful destination, attendees can let go of their hangups, recognize their dating patterns, and create an action plan to heal and grow.

The supportive network created by the Love Retreats has already impacted many people’s lives, and Genevieve and Angela expect the transformative experience to continue having ripple effects on the dating world in the years to come.

“It’s really nice to see men and women change how they see love and understand dating,” Angela said. “It changes their future, their families, their possibility of having children. It changes everything for them, and I enjoy seeing that.”