Editors’ Choice Award: m.henry is an Upscale Spot for a Breakfast or Lunch Date

The Scoop: m.henry is an upscale eatery in Chicago where couples can enjoy contemporary twists on traditional daytime staples, including pancakes, bread pudding, and sandwiches. The restaurant, which opened in 2003, is known for its casual atmosphere and extensive menu. Diners can order tasty breakfast, brunch, and lunch items for takeout or to eat outside on its beautiful patio throughout the morning and early afternoon. For offering a lively date environment and innovative dishes, m.henry earns our Editors’ Choice Award.

On warm days in Chicago, couples often decide to have a brunch date on the back patio of m.henry, a popular eatery that opened in 2003. The COVID-19 pandemic shut down indoor dining at the restaurant’s location, so it moved its experience, ambiance, and delicious food outdoors.

Couples can bring a blanket for the chilly weather and even a bottle of champagne to make mimosas, as the restaurant is BYOB or “bring your own beverage.” They can find a quiet corner away from the breeze to enjoy each other’s company and the plants, fountain, and mural on the patio.

The two most popular dishes diners often order on a brunch date at m.henry are Fannie’s Killer Fried Egg Sandwich and Blackberry Bliss Pancakes. The fried egg sandwich has egg, bacon, tomatoes, gorgonzola, and fresh thyme on house-made bread, and comes with a side of potatoes. The pancake dish features layers of hotcakes topped with mascarpone cream, blackberries, and granola.

“We’ve been on the Food Network several times for those pancakes,” said Michael Moorman, Founder of m.henry.

Couples enjoy the restaurant’s menu items so much that they’re often willing to brave the cold to enjoy a tasty brunch or lunch dish.

“We had people outside with snow under their feet. A couple had a corner booth, and so did a family of four. I don’t know that I’d be out there in 29-degree weather,” Michael said with a laugh.

The restaurant’s garden blooms in the spring and summer, and when the dining room is open, the m.henry team is equally committed to creating a memorable experience for daters.

“Our hanging windows break up the dining space. You can still see each other, but you can have privacy. We have a pretty environment,” said Michael.

Catering to a Diverse Client Base in Chicago

m.henry has been a popular brunch spot since it opened in 2003. Michael had a long history as a restaurateur and has opened eateries in Miami and Chicago. When he moved to Chicago in 1996, he started a vegetarian-focused fast food concept spot downtown.

A few years later, Michael and his business partner, Jorge Aviles, decided to open a restaurant in the city’s popular Andersonville neighborhood. At the time, the area was home to mostly traditional Swedish restaurants, and locals had to travel to nearby communities to find a higher-end breakfast eatery.

“There were no innovative breakfast places or places that did new takes on old favorites,” Michael said. 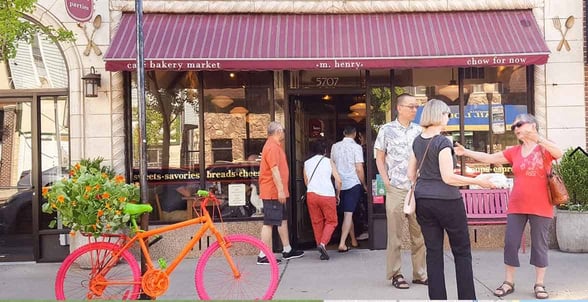 A wide variety of diners enjoy m.henry’s food and atmosphere.

Michael and Jorge polled friends and neighbors to determine what kind of eatery they’d enjoy. They discovered that most people wanted an upscale brunch place that also served lunch.

From the beginning, m.henry found a home in Andersonville. Nearly 20 years ago, the LGBT-oriented neighborhood embraced the restaurant, and gay and lesbian couples were some of the establishment’s first regular patrons. Soon after, it also became a hangout for families and young couples.

All of those demographics are still committed to the restaurant, and its clientele has diversified further.

“The time of the day determines what our dining room looks like. The families with kids come earlier, then the other groups,” said Michael. “Over the last few years, we’ve seen people of more nationalities and ethnicities. Now, we have a much more varied group.”

m.henry focuses on creating an upscale date atmosphere for locals in Andersonville and the surrounding areas. That mission inspires its breakfast, brunch, and lunch menus.

“It’s a community-based restaurant. That has always motivated us and directed our decisions,” said Michael.

“We bake our own bread and brioche for our French toast and bread pudding topped with warm peaches and blackberries,” Michael told us.

The restaurant caters to a variety of dietary preferences. In addition to a gluten-free menu, it has many vegetarian and vegan offerings, including veggie sausage, tempeh strips, and tofu scrambles.

Along with its popular pancakes and egg sandwiches, patrons enjoy m.henry’s bread pudding.

Yelp user David Z. shared his first impressions of the dessert: “I feel like it got better after sitting a day as the flavors got to mingle and get to know each other. The bread pudding was good even when it was cold. When I heated it up, it was game over. Loved the fresh fruit added to the syrup and the sweet bread.”

Even though much of the restaurant’s business is now takeout, its loyal followers have stayed true to their favorite meals.

“I’ve been patronizing m.henry since it opened. I ordered Fannie’s fried egg sandwich, and never looked back! Now during the pandemic, I get my fried egg sandwich to go, but it’s as delicious as ever!” Kelly P. wrote on Yelp.

m.henry has been in Chicago’s Andersonville neighborhood for nearly two decades. Many couples have made the restaurant, which serves breakfast, lunch and brunch, their go-to date spot — and some even propose there.

“We have some proposals, and we’ve done some weddings as well. We get called once or twice a year to help stage a proposal — sometimes hiding a ring on the dish,” said Michael.

This community vibe has continued through the pandemic, as the eatery’s long-term customers continue to support the restaurant by ordering takeout. Supporting local restaurants like m.henry is vital to ensuring they open back up after the pandemic.

“People are used to having an exciting scene, and it hasn’t been that. We stayed busy last summer because of our patio. We were able to seat inside occasionally. At this point, we’re doing about 25% of what we normally do,” Michael said.

For now, couples can recreate an m.henry date night at home, and the restaurant offers all of its menu options for takeout. Its winter brunch menu has entrées that couples probably won’t cook for themselves. Highlights include lemon shrimp, corn cake benedict and drunken stuffed poblano peppers.

The m.henry team is understandably excited to return to a routine in 2021.

“We’ve been so up and down and off and on. Everyone is ready for us to be back to normal,” Michael told us.

Still, despite a challenging year, the team is glad that it has been so foundational to the neighborhood. Michael said that the restaurant may have sustained business during the pandemic because it is truly one of a kind.

“We try to do good-tasting and well-presented food. You can tell that we care, and that makes a difference in the flavor,” Michael said.