The Scoop: Some women have an idea of where they are in their menstrual cycle, but that doesn’t mean they understand their fertility. Ovulation trackers offer more accuracy but typically require women to check their temperature each morning and chart it to find a window for conception. The Tempdrop wearable fertility tracker helps women conveniently see accurate health data and identify their ovulation cycles. Tempdrop detects body temperature and sleep patterns to help women learn more about their bodies. And its app provides a more accurate outlook on reproductive health, whether or not a woman wants to get pregnant.

Infertility is a significant problem for American couples looking to start a family. About 13% of couples have trouble getting pregnant, and 10% have difficulty staying pregnant, according to the U.S. Department of Health & Human Services.

And infertility has many causes. Women may have ovulation issues or blocked fallopian tubes. Men may have a low sperm count, and both partners may suffer from stress about their situation or other environmental factors.

For many women, it can be hard to find out what’s going on. Sometimes, all they know is that they are trying to get pregnant, and it’s not working.

Michael Vardi, the Founder and CEO of Tempdrop, which makes wearable fertility tracking devices, knows the experience well. He recalls how he and his wife took longer — six to eight months — to conceive the second of their three children than they had with their first pregnancy.

“I remember the stress that accompanied every month following the third or fourth month that something was going on or something was wrong,” he said. “That was when I started learning that we didn’t have any idea about the timing.”

That is why Michael invented the Tempdrop tracker, a device that tracks a woman’s temperature while sleeping, a key fertility metric. It also tracks sleep patterns, another useful data point that informs an algorithm designed to help women understand when they are most fertile.

Even for women who are actively trying to avoid pregnancy, the monthly fertility cycle can be a mystery. Women may know when to expect their period, but it’s hard for them to know when they’re ovulating. The Tempdrop fertility tracker helps women gain a better awareness of their bodies and make more informed decisions about their reproductive health.

Many fertility tracking apps on the market today require women to wake up at the same time every day, take their temperature, and record it. Michael said that process poses many challenges in terms of collecting accurate data.

Women have a lower temperature before they ovulate, and after ovulation, they experience a slight increase in temperature. The problem is, body temperatures also change depending on when someone goes to sleep, whether they drank alcohol the night before, or if they already have a baby that wakes them in the middle of the night. Night-shift workers with irregular schedules find fertility tracking complicated.

The Tempdrop fertility tracker measures the temperature of a woman’s skin via a wearable sensor that she puts on at night and takes off each morning. Over time, the algorithm learns a woman’s sleeping temperature patterns and sleep quality to better filter out disturbances to temperature readings like blankets and sleeping positions.

“Tempdrop is a game changer for women practicing fertility awareness. They don’t have to wake up at the same time, or they can be night shift workers,” he said. “It’s amazing to hear how it opens up possibilities to women who were curious about trying fertility awareness methods but gave up quickly.”

Michael, who has a background in mechanical engineering and biomedical engineering, created a prototype in late 2016 and launched the campaign to fund his idea. He produced 1,200 devices to fulfill orders from the initial launch and has seen demand grow ever since.

Improving Through Feedback From Users

Michael said he’s been listening to feedback from women who use the wearable device to understand how they track their fertility and ovulation cycles.

That feedback has been overwhelmingly positive, as evidenced by the fact that the company’s primary marketing strategy is word-of-mouth from satisfied users. Michael said he’s barely spent any money on advertising. 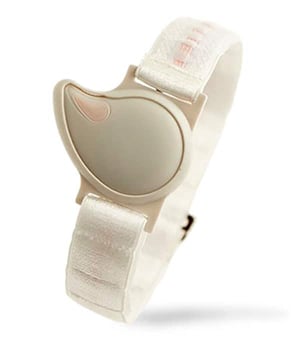 The Tempdrop device is comfortable and adjusts to a woman’s lifestyle.

“Our growth is mostly genuine and organic,” he said. “On average, more than two pregnancies per day are achieved with the help of Tempdrop.”

Most Tempdrop users live in the United States and Canada, although the device is gaining popularity among women in Europe, the United Kingdom, and Australia. Many users are Catholics whose religious beliefs lead them to use the “Natural Family Planning Method” to help them plan pregnancy.

Many users would rather not use birth control pills and want to track their cycles so they can avoid pregnancy.

Michael said Tempdrop has an active forum, which he follows to engage with users and understand their thoughts on the product. The vibrant community is filled with women who share their struggles and successes in taking control of family planning.

He said it warmed his heart to read about women who struggled with having a rainbow baby, or a healthy baby after a miscarriage. Many have been able to get pregnant with the information they learned from Tempdrop.

While Michael said he solicits feedback to improve the product, the wearable sensor gets smarter as women use it. After two weeks of regular wear, the algorithm discerns individual patterns and detects anomalies, including, for example, whether a spike in a woman’s body temperature is due to an occasional few drinks rather than from ovulation.

The data is accurate, and users can even share it with their healthcare providers.

“Tempdrop is much smoother and allows users to understand what they’re going through and what state (they’re) in,” Michael said. “We are unique.”

Since the fertility tracker entered the market three years ago, it has needed to be paired with other fertility charting apps so users can identify their cycle phases. However, Michael said the business will soon launch a dedicated charting app, which will be available for download on iOS and Android.

“For the first time, we will offer the full solution and not just Tempdrop as a temping tool,” he said. “We are more in tune with the community, listen to what they need, and keep improving based on their feedback.”

The app is designed for women who either want to get pregnant and those who don’t. Depending on their objectives, they can see a fertility window for when to conceive or a window for when it is safe to have sex without getting pregnant.

“It’s not just about getting pregnant or avoiding pregnancy, but about knowing their bodies,” he added. “If they track certain data, they can clearly understand the fertility cycle phase they’re in, and make conscious decisions on what they know.”