The Scoop: Michigan’s Unity Vibration was the first officially designated Kombucha brewery in the United States. Because of natural fermentation during the Kombucha process, Unity Vibration started making a unique beverage: Kombucha beer. The tasty drink soon found a devoted following, including couples looking to spice up their date nights at home. Unity Vibration Kombucha beers are known for their flavor profiles, and they’re healthier than traditional beer varieties. Couples in 31 states can have Unity Vibration offerings delivered to their door.

When couples decide to shake up a date night at home, they often look for a new drink to help them connect and relax. Many health-minded couples choose a unique beverage from Michigan brewery Unity Vibration: Kombucha beer.

Unity Vibration delivers its beverages, including its popular Bourbon Peach Kombucha beer, directly to couples in 31 states. When the Kombucha beer shows up at their door, they can pair it with a delicious dinner that best suits its flavor profile.

“Our Bourbon Peach goes well with smoked things and many types of meat. Those flavors lend themselves to both savory and sweet foods,” said Rachel Kanaan, who founded Unity Vibration with her husband Tarek.

Rachel also formulates flavors for the brewery’s Kombucha and Kombucha beer, and she chooses the herbs, fruits, and other ingredients for brewing.

When the couple launched Unity Vibration 10 years ago, it was the first Kombucha microbrewery in the United States. Now, as many more Kombucha breweries have sprung up around the country, Rachel and Tarek are proud to have been a trailblazer in the industry.

The couple began making Kombucha when they were still dating, but it was just a hobby. Rachel worked professionally as a massage therapist, and Tarek was an automotive engineer.

In 2009, both were struggling to make ends meet during the recession. They decided to turn their creative interest in brewing Kombucha into a business in a downstairs bedroom in their home in Ypsilanti. A decade later, they haven’t looked back.

“Our name Unity Vibration focuses on the idea of togetherness, creativity, and making things. We want to inspire people to create what they love and foster that sense of togetherness,” Rachel said.

Combining Beer and Kombucha in One Delicious Drink

Kombucha beer isn’t a traditional beer made from a grain base, typically malted barley, along with hops and yeast. Kombucha beer is made from other ingredients and is gluten-free. That’s why it has found a following of those with Celiac disease and other gluten-sensitive beer lovers who can’t consume traditional brews.

Still, it has an alcohol content similar to beer, meaning that couples get a similar buzz from Kombucha beer as they would from a grain beer.

The traditional Kombucha brewing process produces a natural low alcohol content. That’s why the Kanaans’ Kombucha production was classified as a “microbrewery” — they were producing beverages with a slightly higher alcohol content. If couples find non-alcoholic Kombucha in a store, they know that the production process was altered to remove the natural alcohol content.

“Our beverage was always categorized as beer. We make authentic tea and don’t do anything to tamper with the production. If you were to brew your own tea at home, you’d definitely have alcohol in it,” Rachel said.

It was a natural next step that Rachel and Tarek would start making Kombucha with a higher alcohol content.

“There were a lot of similarities between beer-brewing and Kombucha brewing,” Rachel told us.

The couple now offers several Kombucha beers. A popular option is the Unity Vibration KPA, or Kombucha pale ale. The KPA has flavors of juniper, grapefruit, and a bouquet of hops.

You and your partner could also try the Tart Raspberry Kombucha beer, which tastes like a framboise, a popular Belgian beer fermented with raspberry. The Elderwand Kombucha beer combines blackberries, blueberries, buckwheat, and elderberry juice into a tasty brew.

Catering to Health-Conscious and Open-Minded Couples

Kombucha beer is healthier than traditional beer. The beer has a Symbiotic Colony of Friendly Bacteria and Yeast (S.C.O.B.Y.), a living organism created through the fermentation process.

Kombucha’s S.C.O.B.Y. creates a healthier gut in those who consume it, which can improve overall wellness. Regular Kombucha drinkers report improvements in their digestion, immune systems, and energy levels. 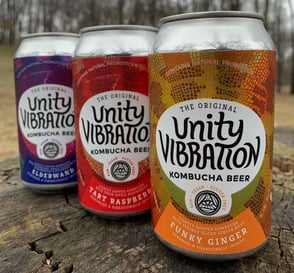 “All of our beer has probiotics in it, which is a nice way to get a recreational buzz on,” Rachel said.

The health benefits of Kombucha beer means Unity Vibration’s serves many health-conscious customers. However, the brewery attracts a wide range of clients because its beverages are particularly tasty.

“When we started selling our Kombucha beer, people were interested in the health benefits and the flavor profile. We’re chosen time and time again as the best tasting beer and Kombucha,” Rachel notes.

If you’ve never tried Kombucha beer, Rachel tells us that you’ll enjoy the beverage if you like Kombucha or sour beers. Drinking something you’ve never had with your partner can liven up a date night, especially if you’ve been spending most of your time together at home.

Unity Vibration has also developed a loyal community of Kombucha beer lovers on their social media. The microbrewery’s fans enjoy the can and bottle art and often send pictures of themselves enjoying the beverage wherever they are.

“Trying something new can liven things up. We love that interaction with folks, and we invite them to send in pictures. We’re all about creating something people love,” Rachel said.

Those trying Kombucha beer for the first time often choose to make a date night experience out of it. The Tart Raspberry pairs well with any kind of chocolate, including cakes and bars.

The Funky Ginger, a Kombucha beer made with ginger and black tea, pairs well with Asian food or fermented foods. Couples can also connect with each other after drinking Unity Vibration’s newest offering, Heart Tuner Kombucha spritzers.

Rachel has developed the new line of Kombucha spritzers to focus on aligning consumers’ spiritual energies. The Heart Tuner product is a low-calorie, no-sugar spritzer.

“During the pandemic, we have been out of our bodies. I was inspired to formulate something that used traditional herbs to ground people,” Rachel said.

One of the Heart Tuners called Down to Earth is made from lavender and peppermint, both grounding herbs, and zinc, which promotes physical health. The goal of the spritzer is to help consumers to feel peaceful.

Other Heart Tuner flavors include Eye of the Worlds, a combination of cardamom, rose water, Persian lime, and Sentient Beings, made from ginger root, lemongrass, passionfruit, and matcha.

With this new offering of spiritually-oriented Kombucha spritzers, Unity Vibration again puts itself at the head of the pack in the brewing industry. That is a reputation that Rachel and Tarek value and continue to foster.

“Even though we’re not big, we’re looking for big new things,” Rachel said.