Black Ivory Coffee: Give Your Partner the Rarest Roast in the World with Beans Refined by Elephants

The Scoop: Modern coffee drinkers often want more than just a tasty cup of coffee; they want memorable experiences to go along with it. Black Ivory Coffee provides both. The company only produces around 200 pounds of beans each year because the beans are refined in the stomachs of elephants and then roasted for a smooth finish. Black Ivory Coffee gives back to both the young adults who help care for the animals and the Thai elephants by creating safer habitats. If you sit down over a cup of Black Ivory Coffee with your partner, you’re sure to have an experience you may only enjoy a handful of times in your life.

The cherry part of the coffee plant looks nothing like the roasted beans that you see in the grocery store. Instead, coffee cherries are small, red fruits that resemble tiny grapes. Not many animals in the world enjoy eating coffee cherries, but, for elephants, they’re a tasty snack.

Blake Dinkin recognized the elephant’s penchant for eating coffee cherries, and it inspired him to create a truly unique product — Black Ivory Coffee.

“The elephant will eat the coffee cherries along with its other foods, which include things like bananas, sugar cane, tamarind, and rice,” he said.

It takes 12 to 72 hours for the elephant to digest the coffee cherries, and they ferment in its stomach along with whatever else it has eaten. That only increases the complexity of the coffee beans, which the elephant doesn’t digest. 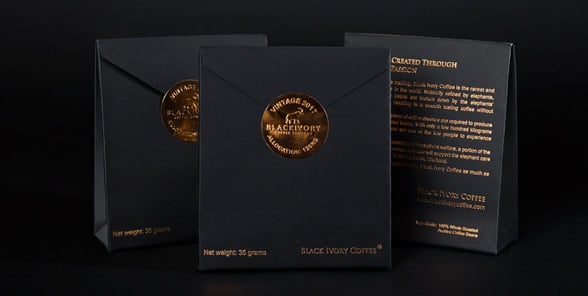 Black Ivory Coffee only produces around 200 pounds per year, making it the rarest coffee in the world.

“It’s also a natural process, and you end up getting a very distinctive coffee,” Blake told us.

After the animal digests the coffee cherries, elephant caregivers pick the coffee beans, wash them, rake them, and sun-dry them before roasting. Only the best beans are chosen for roasting, which Black Ivory Coffee does in both the traditional way and in cognac or rum barrels.

“The beans aren’t filled with alcohol. I use oak barrels that had rum or cognac in it before, and the aroma is still in the wood. If I put the beans inside, they absorb the smell,” Blake said.

The product is an incredibly rich and smooth cup of coffee that is one of the rarest in the world. Only about 200 pounds of Black Ivory Coffee is produced each year.

Couples from around the globe jump at the chance to purchase the unique beans because the experience can be just as memorable as the taste.

Creating the Most Unique Coffee Across the Globe

Blake has had a passion for making this unique coffee for more than 15 years, and it took him years of learning and experimentation to refine the distinctive brews.

He first moved to Ethiopia in 2004 to work with civets, nocturnal mammals native to Asia and Africa, and he tried to find local farmers to help him realize his vision.

“The farmers thought I was crazy. They had no idea that civets even ate coffee,” Blake said.

At the same time, he started reading about the hostility that existed between elephants and coffee farmers in India and the West African country of Cameroon. When elephants were hungry, they’d come onto the coffee plantations, where they’d do more than eat the coffee cherries; they’d destroy the whole plant. Farmers sometimes became so angry that they’d kill the elephants.

Knowing that only made Blake more passionate about his dream. He wanted to create a business that would also improve the relationship between farmers and elephants.

“I set out to work with wildlife experts and the government to try to improve conditions for the animals and those farmers,” Blake told us.

So, he set out to prove that elephant-refined coffee was a desirable product. He convinced his local zoo in Canada to let him use their elephants to develop his blend. At first, he thought he could just feed the coffee cherries to the elephants as part of their food, but the coffee that they produced wasn’t all tasty.

Eventually, he moved to an elephant camp in Sumatra, Indonesia, where he continued to work on creating a better coffee. By 2011, he knew how to make an excellent cup of coffee from start to finish.

Now that he had the development process down, Blake needed to find elephants that were humanely treated. He found another elephant camp in Northern Thailand, where he perfected the technique over the next four years. Still, though, he needed more elephants if he wanted to expand his coffee bean production.

He decided to move to the largest elephant camp in the world, in Surin, Thailand. There, he could devote all of his energy to the business.

Black Ivory Coffee now has a devoted following of elite clientele, and it is served at five-star hotels, including the Four Seasons and the Ritz Carlton.

“If it’s good enough for those establishments, that says something about the coffee’s quality,” Blake said.

Black Ivory Coffee isn’t the kind of coffee that you can grind and put into your French press every morning. Instead, a single packet that makes around four espresso cups costs $100. That price is due to the rarity of the beans; in 2019, the company only produced about 220 pounds of product. 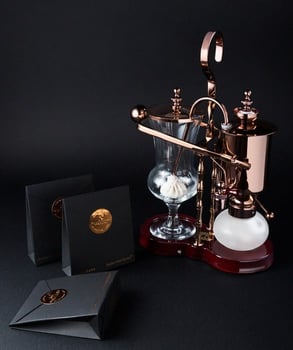 Blake doesn’t recommend brewing the coffee in a traditional way. Instead, he suggests ordering the company’s own coffee brewer. The machine is based on an 1840s model and uses a flame to heat and brew the beans.

“I would say it’s the most beautiful way someone can drink coffee. It looks like a science experiment and a steampunk-style project. If somebody wants to splurge, it’s a great option,” he told us.

For those who are interested in Black Ivory Coffee, but can’t pay $100 for a few cups, Blake is in the process of rolling out a few less-expensive options. One of these will be a coffee blend that still includes elephant-fermented beans, along with other varieties.

“I wanted to create something that could be consumed more often. It’s not going to be 100% Black Ivory Coffee, but it will have some distinctiveness. The pack will be around $50, or $25 per cup,” he said.

He’s also working on developing a soap that will smell like the Thai rainforest. The soap will include honey from the rainforest and, of course, coffee.

Black Ivory Coffee is all about creating one-of-a-kind experiences while giving back to the community. For its fans, the coffee is entirely different than what they’re used to drinking every morning.

“Our coffee is something you’ll remember and have a good time drinking,” Blake said. “You’ll savor it once or twice a year.”

Black Ivory Coffee is Giving Back to Thai Elephants, Caretakers, and Farmers

In the end, Black Ivory Coffee provides coffee lovers with a distinct and rare experience in a cup. But Blake built his business model to benefit both the elephants and the local community.

His employees are mostly local high school students who are paid to wash and rake the coffee. These students save the money they earn to care for their families or to pay for college.

Unlike many farmers in Thailand, these students are paid a living wage for their work. While an average coffee worker in Thailand earns seven Thai Baht (THB) per kilogram of coffee harvested, Black Ivory Coffee pays 350 THB for the same harvest. And workers can accumulate a kilogram of coffee in about 15 minutes.

Additionally, proceeds from the sales of Black Ivory Coffee support the Golden Triangle Asian Elephant Foundation. This foundation aims to change the way the Thai people view elephants. Instead of seeing them as nuisances, the company seeks to present them as vital to the ecosystem and worth preserving. As part of that mission, Blake and his team take local high school students to Thai national parks to see wild elephants in their natural habitats.

“A lot of the kids in the village have seen captive elephants, but they’re not familiar with wild elephants. Seeing elephants this way reduces the chance of human-elephant conflict,” he said.

Blake knows that a lot of couples appreciate supporting a good cause while enjoying a unique cup of coffee. He suggests that couples can appreciate Black Ivory Coffee’s one-of-a-kind story, while also enjoying something that they’re likely not going to have often.

“At the start of a new relationship, it’s nice to have a shared experience. Black Ivory Coffee is distinctive and memorable, but it also contributes to preservation,” he said.